Tim Pawlenty has his own Rev. Wright 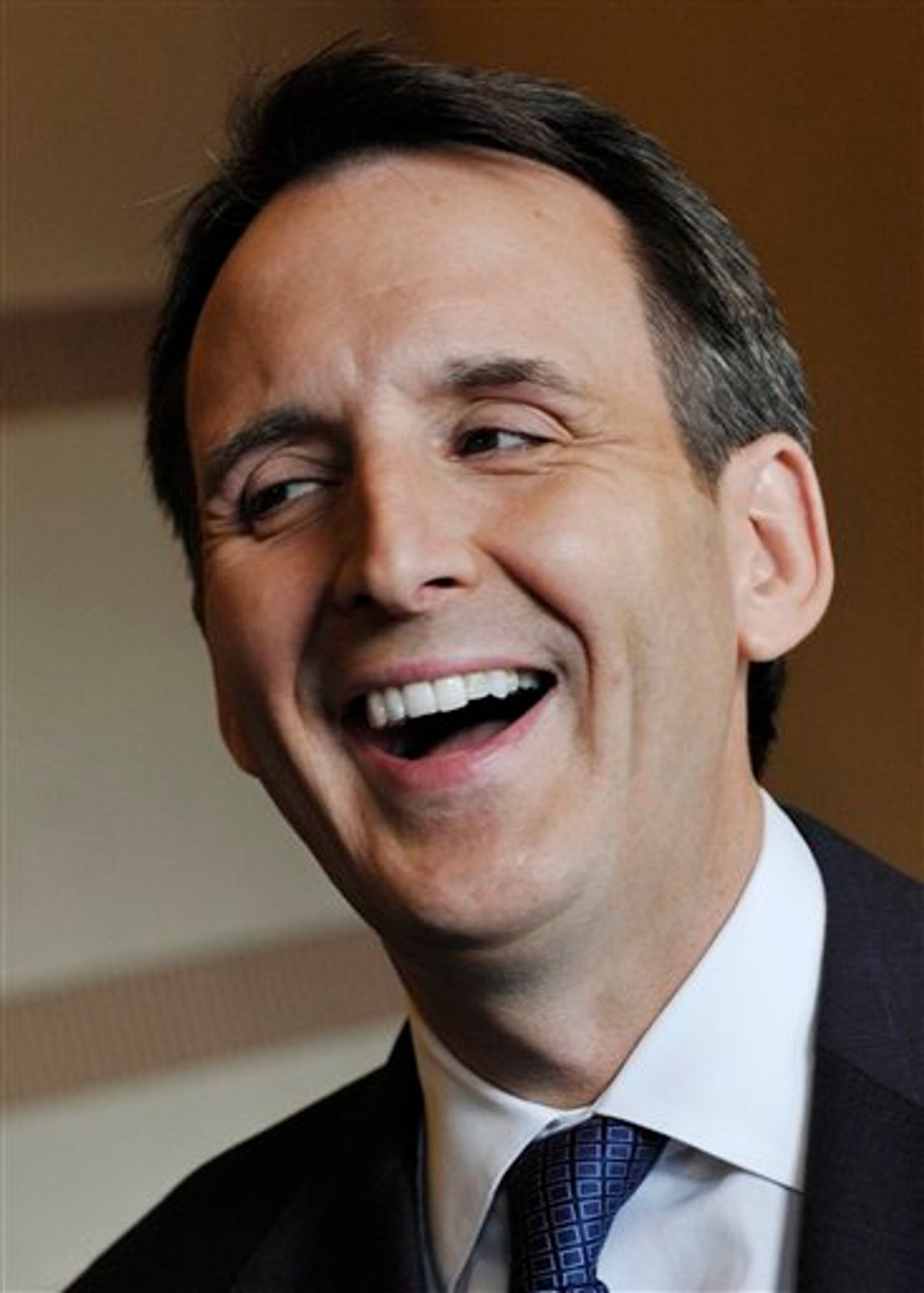 FILE - In this May 18, 2011 file photo, former Minnesota Gov. Tim Pawlenty talks with reporters prior to a fundraising dinner in Minneapolis. Pawlenty on Sunday, May 22, 2011 released an Internet video ahead of a public appearance Monday in Iowa, where he planned to formally enter the race for the 2012 GOP nomination. (AP Photo/Jim Mone, file) (AP)
--

It's not quite "God damn America!" but this one bears watching. Tim Pawlenty may have his very own pastor problem.

The former Minnesota governor's longtime pastor is a man named Leith Anderson, who, while he is a national leader in evangelical circles, holds views on a few crucial political issues that are anathema to the typical GOP primary voter.

The influential conservative blogger Erick Erickson of RedState.com tweeted this week: "Prediction: Tim Pawlenty's preacher is going to cause him some problems in the primary."

Erickson included a link to a 2006 NPR story , headlined "Evangelical Leaders Urge Action on Climate Change," which leads with an anecdote told by Anderson.

"My wife and I took an excursion to Antarctica, and for a period of a few weeks, we heard some of the things that were related to global warning as we visited sites," he recalls. ...

"Climate changes in terms of famine, in terms of the inability to grow crops, in terms of the flooding of islands, most affects the poor," he says. "So we here in America probably can do many things to exempt ourselves from the immediate consequences, but the front edge of disaster is most going to affect those who have the least."

Anderson, who leads a mega-church of 5,000 worshippers, is one of 86 evangelical leaders who are challenging the Bush administration on global warming. Their "Evangelical Call to Action" argues that there's no real scientific debate about the dangers of climate change -- an assertion that many balk at. The group is calling on the government to act urgently, by, among other things, passing a federal law to reduce carbon dioxide emissions.

The climate change issue is particularly sensitive for Pawlenty, who had to apologize during the first Republican debate for his past support for a cap-and-trade plan to cut emissions. We've also seen Newt Gingrich attacked from the right on climate change.

Pawlenty was raised Catholic but became an evangelical after the woman whom he would ultimately marry brought him to Wooddale Church, where Pawlenty was inspired by Anderson. It was also Anderson who officiated at the Pawlentys' wedding in the late 1980s.

"The first time I heard him speak, I was inspired by his style and persuaded by his temperament, intellect, and wisdom," Pawlenty wrote of Anderson in his recent autobiography, "Courage to Stand." "From day one, I felt I was truly learning from him, and I benefited from his sermons. He drew me in, to the point where if I missed his messages any given week, often I'd get a tape of it and listen to it later."

So there's no doubt that this is a central figure in Pawlenty's life.

The website Death and Taxes also noted that the National Association of Evangelicals, of which Anderson is the president, has taken a position on immigration that would not sit well with many GOP primary voters:

[We ask] that the government recognize the central importance of the family in society by reconsidering the number and categories of visas available for family reunification, by dedicating more resources to reducing the backlog of cases in process, and by reevaluating the impact of deportation on families.

Anderson himself spoke out against Arizona's hard-line anti-immigration law. And earlier this year, President Obama named Anderson to his Advisory Council on Faith-Based and Neighborhood Partnerships.

So don't be surprised if one of Pawlenty's opponents manages to get the word about Anderson out to primary voters.