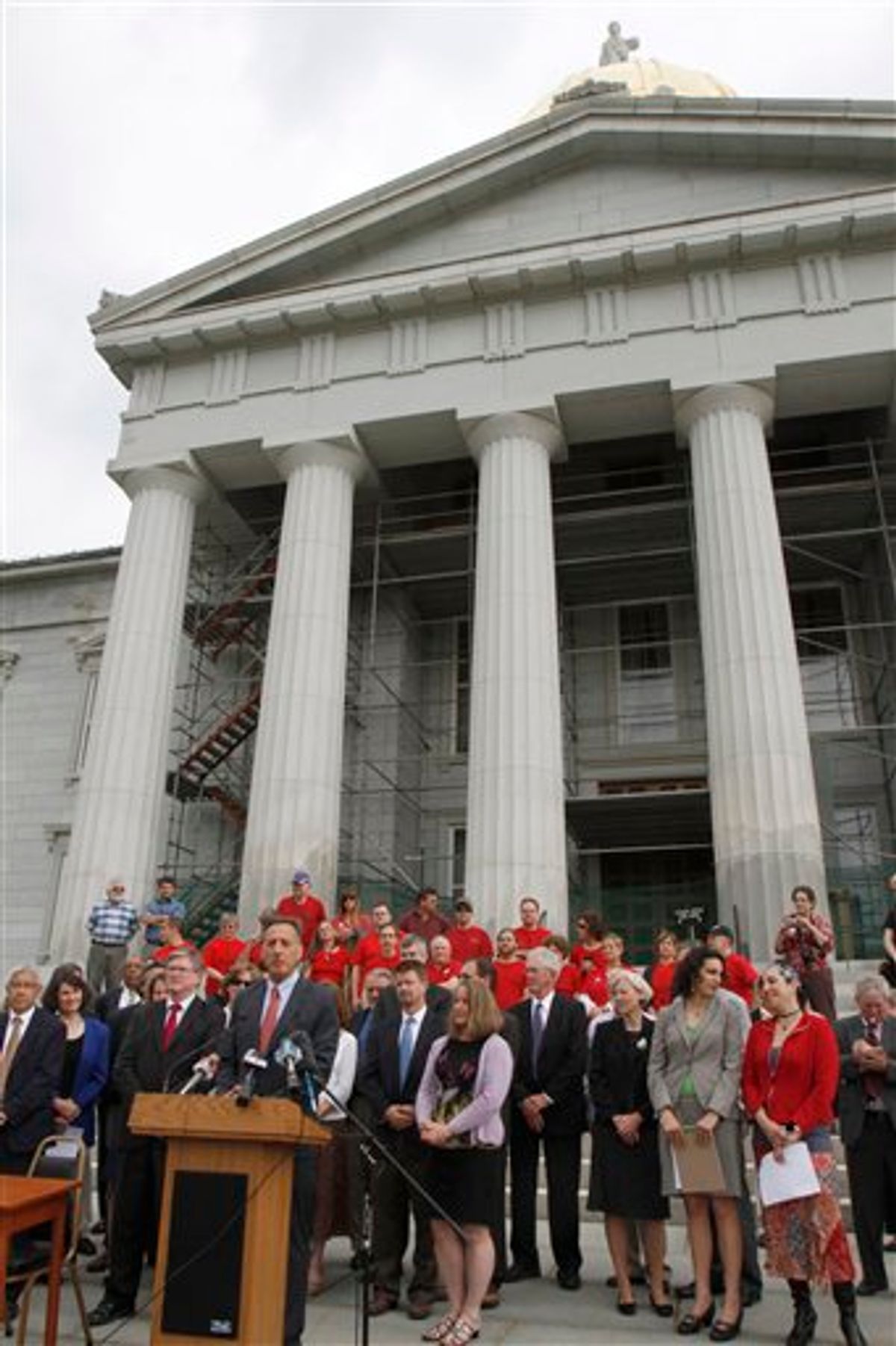 Gov. Peter Shumlin speaks on the steps of the Statehouse prior to signing the health care bill on Thursday, May 26, 2011 in Montpelier, Vt. (AP Photo/Toby Talbot) (AP)
--

Vermont still has "a few challenges" ahead to meet its goal of a universal health care system this decade, Gov. Peter Shumlin said Thursday as he signed into law the bill designed to make the state the nation's first with fully publicly funded health care.

More than 150 people, including legislators, administration officials, advocates who pushed for the bill and a handful of opponents gathered on the Statehouse steps as storm clouds threatened but gave way to humid sunshine.

"We gather here today to launch the first single-payer health care system in America, to do in Vermont what has taken too long -- have a health care system that is the best in the world, that treats health care as a right and not a privilege, where health care follows the individual, isn't required by an employer -- that's a huge jobs creator," Shumlin said.

Among Vermont's challenges: getting waivers from the federal government at a time when the U.S. House has come out strongly against the less ambitious federal health care bill passed last year.

The Vermont law also leaves for future debate whom the state would pay for its publicly financed health care system, what benefits would be covered and a host of other details to be figured out by a new state board in consultation with the Legislature and administration officials.

"This bill has a long, long, long way to go," said Craig Fuller, managing director of the Employers' Health Alliance, a Vermont-based group that tracks health reform for businesses.

But that didn't stop supporters from celebrating Thursday.

"We're going to hear all kinds of scare stories that this is a thoughtless experiment or that it is too bold," said Dr. Deb Richter, a longtime advocate of a single-payer health care system. "But I would remind you that every other industrialized country is doing what we are trying to do. And they do it for far less money, they live longer and they get better-quality care."

Under a the law, a five-member board will be appointed by October to set up Green Mountain Care, as the state system is to be called. Among the board's tasks will be to set up a payment system under which hospitals and other providers will be paid a set amount of money to provide health care to a set population, as opposed to the current system known as fee for service, which, for instance, pays doctors on a per-visit basis.

"There is ample evidence that we can reduce cost growth without compromising health care quality, but it will take a new approach -- we can't simply cut provider fees," a statement issued by Shumlin's office said.

The law also calls on the state to set up a health care exchange -- or simplified insurance marketplace -- to comply with provisions of last year's federal law and to serve as a stepping stone to the law's longer-term goal of achieving a state-run system.

The bill signing drew a range of reactions from industry and advocacy groups.

The liberal blog Firedoglake.com and Physicians for a National Health Plan posted a petition online inviting people to ask the Obama administration to ensure Vermont gets the waivers it needs to implement its single-payer system. Backers say the waivers are crucial to Vermont's efforts to get the maximum number of residents into the system.

David Oliker, president and CEO of MVP Health Care, one of the major insurers operating in the state, issued a statement saying opponents of the Vermont law continue to have questions and concerns, among them: how it will be paid for, how it will affect Vermont residents who work for out-of-state companies, and how it might affect doctors' willingness to continue working in the state.

One of those who said she was glad to see the law taking effect was Jennifer Schneider, a 41-year-old Burlington woman who was diagnosed with late-stage ovarian cancer in 2009 and detailed her troubles getting insurance and understanding the coverage she got.

A person in that situation should be able to focus on fighting her illness, not her health insurer, Schneider said. "You shouldn't have to worry about whether you're covered," she said.