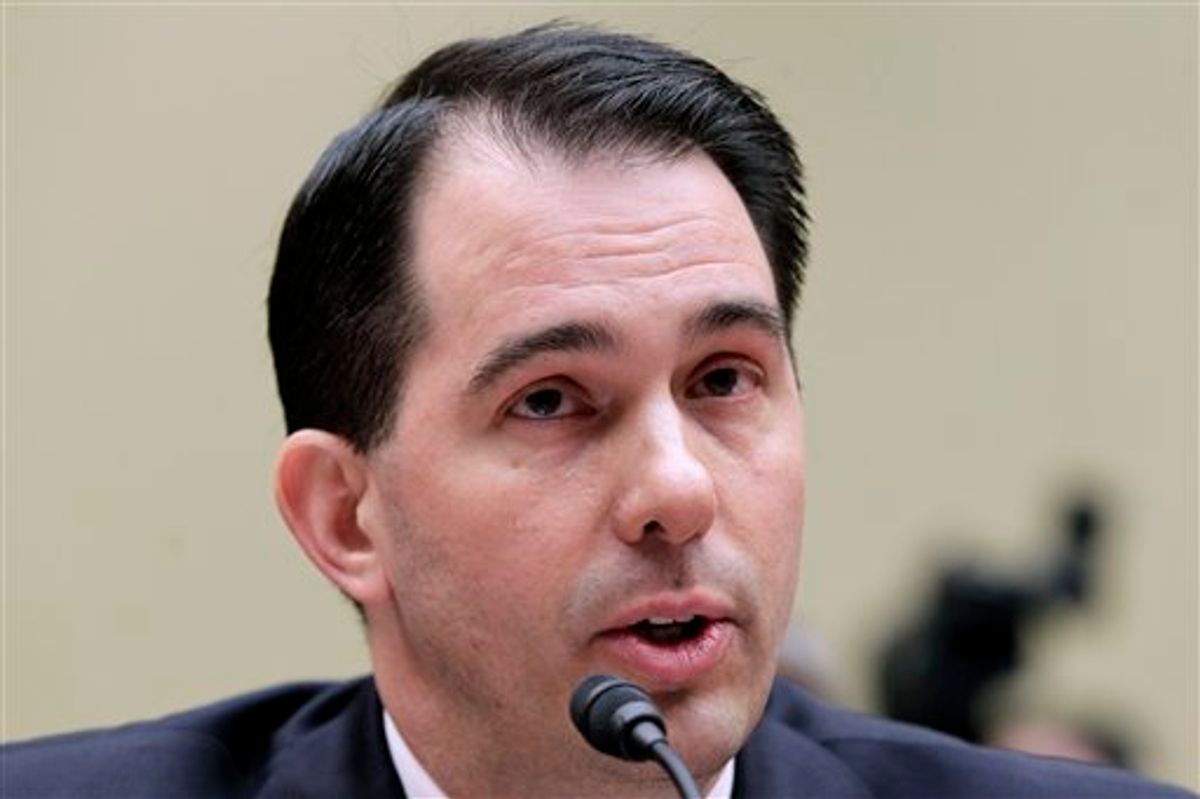 Wisconsin's law taking away nearly all collective bargaining rights from most public workers was struck down Thursday by a circuit court judge but the ruling will not be the final say in the union fight that brought tens of thousands of protesters to the Capitol earlier this year.

The state Supreme Court has scheduled arguments for June 6 to decide whether it will take the case. Republicans who control the Legislature also could pass the law a second time to avoid the open meeting violations that led to the judge's voiding the law Thursday.

Gov. Scott Walker pushed for the law as a way to help balance the state budget that was projected to be $3.6 billion short when he introduced the proposal in February. His spokesman, Cullen Werwie, said the governor would have no comment on the ruling.

Republican Senate Majority Leader Scott Fitzgerald and his brother, Assembly Speaker Jeff Fitzgerald, said in statements they believe the Supreme Court will rule in their favor.

Wisconsin Department of Justice executive assistant Steve Means said the ruling was disappointing and that he was confident the Supreme Court would overturn the decision. The Justice Department argued that the lower court judge had no authority to block enactment of a bill passed by the Legislature.

Ismael Ozanne, the Dane County district attorney who argued for striking down the law, did not immediately return a message.

While Walker and Republican legislators have said they legally passed the bill, they say they would pass it again if necessary to have it take effect when Walker's two-year budget begins July 1.

"It tells legislators 'You can't be arrogant,'" Beil said. "You have to do it in the light of day. You can't take stuff away from people in a backroom deal."

If the Legislature legally passes the bill, Beil said more legal challenges attacking its constitutionality will be filed.

"It is not in the best interest of students, schools or Wisconsin's future to take the voices of educators out of our classrooms," Bell said in a statement. "We've seen how this issue has polarized our state."

The last time the Legislature took up the issue, tens of thousands of protesters including many teachers descended on Madison in a vain attempt to persuade lawmakers to reject Walker's proposal. The protests, which grew to as large as 85,000 people, lasted for weeks and made Wisconsin the center of a national debate on union rights. Meanwhile, all 14 Democratic senators fled to Illinois to prevent a 20-member quorum to pass the bill. The Senate then called a special committee meeting with roughly two hours' notice so it could amend the bill to take out spending items that required a higher quorum to be present.

Once amended, the Senate passed the bill without the Democrats present and the Assembly followed suit the next day. The Assembly had previously passed the more expansive version of the bill following a 61-hour filibuster by Democrats. Walker signed the stripped-down version into law on March 11.

She noted the open meetings law typically calls for 24-hours' notice or, in cases with just cause, two hours. Sumi said nothing justified less than 24 hours for the special committee and declared the law void. She had already put the law on hold while she considered the case.

"Our form of government depends on citizens' trust and confidence in the process by which our elected officials make laws, at all levels of government," she wrote in the 33-page decision.

A day earlier, the Justice Department sent Sumi a letter urging her to consider recusing because she appears biased against the Republicans. The agency pointed to a brief she filed with the Supreme Court outlining her belief and that she has the authority to void a law if the open meetings law was violated during its passage, saying she shouldn't have set out her position before she issued a decision.

The collective bargaining law called for public workers at all levels, from janitors at the state Capitol to local librarians, to contribute more to their pension and health care costs, resulting in savings to the state of $300 million through mid-2103. The law also strips them of their right to collectively bargain any work conditions except wages. Police and firefighters are exempt.

Walker was counting on the savings to help blunt the impact of more than $1 billion in aid cuts to schools and local governments he's calling for in his budget which could be ready to be debated in the Senate and Assembly in mid-June.

Republicans passed it without them present, using a hastily called meeting to put the bill in the form needed to do that. The calling of that meeting with less than two hours' notice is what led to the lawsuit.