"We have reached a turning point," Clinton says after meeting with senior Pakistani officials 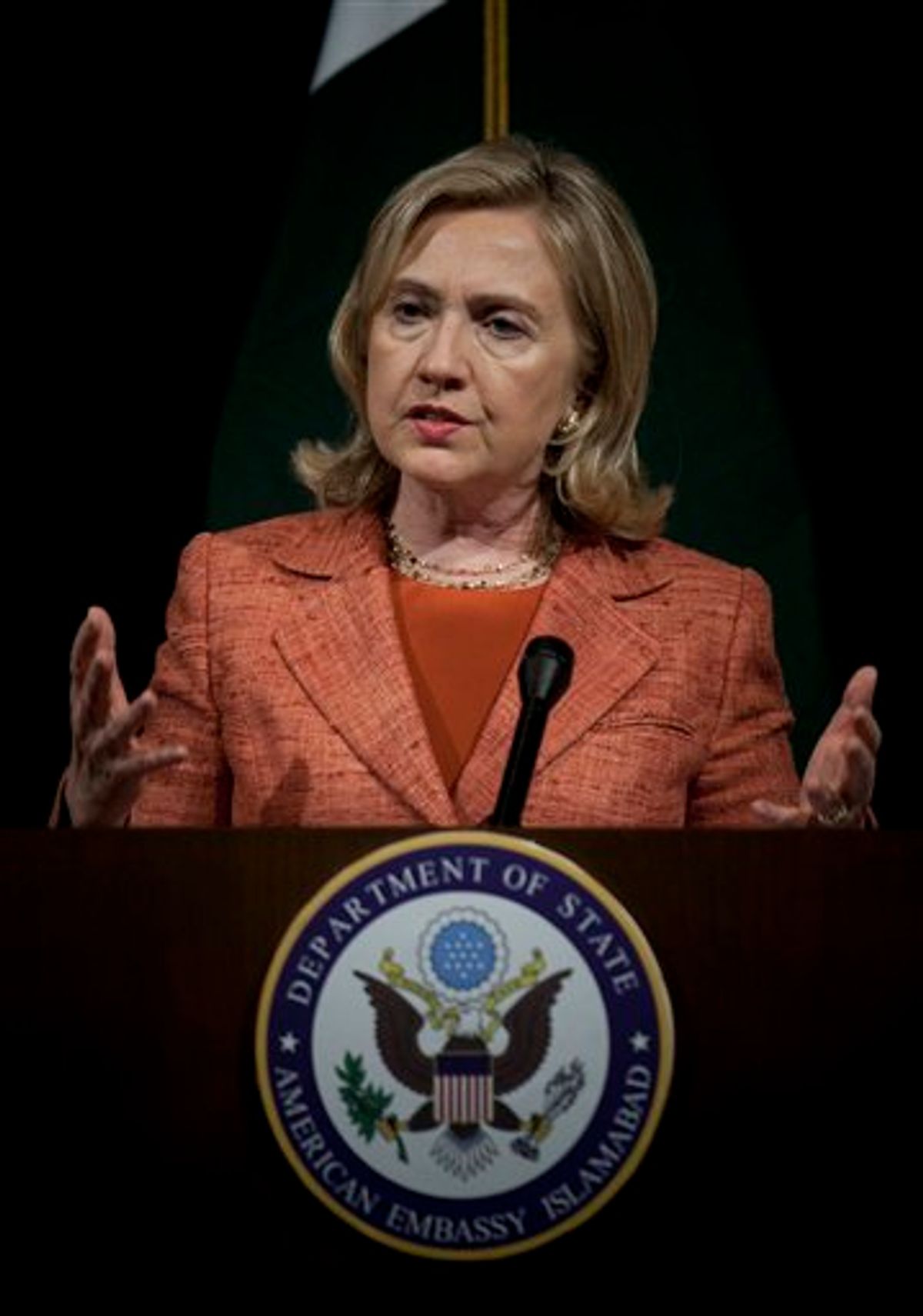 U.S. Secretary of State Hillary Rodham Clinton addresses a news conference at U. S. embassy in Islamabad, Pakistan Friday, May 27, 2011. Clinton said that relations between the United States and Pakistan had reached a turning point after the killing of Osama bin Laden and Islamabad must make "decisive steps" in the days ahead to fight terrorism. (AP Photo/B.K.Bangash) (AP)
--

The killing of Osama bin Laden is a watershed moment for Pakistan's confrontation with homegrown terrorism, U.S. Secretary of State Hillary Rodham Clinton said Friday. She sought to patch relations rocked by knowledge that the terror mastermind lived for years in a country receiving billions in U.S. counter-terror aid and that the U.S. didn't trust its ally enough to alert Pakistani leaders that the raid was coming.

"We have reached a turning point" following the long hunt for bin Laden, Clinton said after intensive meetings in the Pakistani capital under tight security.

"It is up to the Pakistani people to choose what kind of country they wish to live in," Clinton said, "and it is up to the leaders of Pakistan to deliver results."

Clinton and Adm. Mike Mullen, chairman of the U.S. Joint Chiefs of Staff, praised Pakistan's stand against some militants and challenged its leaders to take decisive steps to jointly take on al-Qaida. Both the senior leadership of al-Qaida and the Taliban are thought to live in Pakistan, and affiliated militants use safe havens in Pakistan to attacks U.S. forces fighting next door in Afghanistan.

U.S. officials said the U.S. and Pakistan have agreed to take some specific measures together, and Clinton referred to joint operations coming soon. There were no details on targets or plans.

Pakistani President Asif Ali Zardari's office released a statement after the meeting saying that the two sides agreed to "work together in any future actions against high-value targets in Pakistan," and to cooperate on promoting peace in Afghanistan.

The U.S. pair repeated a warning that lower-ranking U.S. officials have been making to Pakistan since the bin Laden raid: The billions of dollars a year in military and development aid to Pakistan will dwindle if Pakistan is seen to play both sides.

Mullen and Clinton met jointly with Zardari, Pakistan's prime minister, the interior minister and the powerful army and spy chiefs. A brief portion of the meetings witnessed by reporters was stiff and awkward, with no smiles among the U.S. delegation. U.S. officials later said the overall mood was serious but productive.

The delicate attempt to manage Pakistani anger following the bin Laden raid underscores the stakes for the U.S. in dealing with Pakistan, a nuclear-armed nexus for extremism and terrorism in a strategically vital region. The U.S. also relies on Pakistan for transit and supply routes for the war in Afghanistan and will need its help if Afghanistan is to broker a peace deal with Taliban militants that can end the war.

Clinton warned against the reflex to blame America or mistrust its motives.

"Conspiracy theories will not make problems disappear," she said.

Clinton and Mullen are the highest-ranking U.S. officials to meet with Pakistani leaders since the May 2 raid by Navy SEALs.

The raid damaged the reputations of the Pakistani government and military, with many Pakistanis asking how bin Laden could have hidden in an army town, and how the Americans managed to enter the country, carry out the raid and leave Pakistani airspace without being detected.

"I think we all realize the challenges under which this relationship now labors," Mullen said.

The commando raid raised a stark question about U.S. faith in its own decade-long strategy to coax greater cooperation from a historically ambivalent counterterrorism ally. Either Pakistani officials harbored the world's most wanted terrorist or were so inept that he lived for years right under their noses.

Shamefaced Pakistani authorities say it is the latter, and Clinton said repeatedly on Friday that there is no evidence that any senior leaders knew about the hideout.

U.S. officials said the raid has forced a crisis of conscience among Pakistan's government and military elite over the country's political complexion and goals. The Obama administration wants the raw shame and anger many Pakistanis feel about the raid to yield a new, fuller commitment to fighting all brands of terrorism.

Despite optimism on that point from Clinton and Mullen on Friday there is scant evidence now that the Zardari government has the pull or the resolve to roust militants along the border. Nor has it taken on powerful naysayers who want to keep ties to the Taliban as a hedge against a possible power shift in Afghanistan when international forces leave.

Successive Pakistani governments, both civilian and military-led, have promised to confront al-Qaida and other terror agents. Pakistan has waged a two-year campaign against militants targeting the weak, U.S.-backed Zardari government but has done little to expunge safe havens for militants who attack U.S. and NATO forces in Afghanistan.

The U.S. visit comes a day after a Pakistani Taliban suicide bomber detonated a pickup truck loaded with explosives near several government offices in northwest Pakistan, killing at least 32 people.

Thursday's blast was the latest in a series of attacks to hit the country since the bin Laden raid, including an 18-hour siege of a naval base in Pakistan's south. Some commentators and elements in the media have tried to blame the siege on "foreign hands" such as archrival India, with some suggesting that it was part of a grand Western conspiracy to destabilize Pakistan and take away its nuclear weapons.

Clinton's visit was not announced in advance for fear of an assassination attempt or terror strike. She was in the Pakistani capital only a few hours.