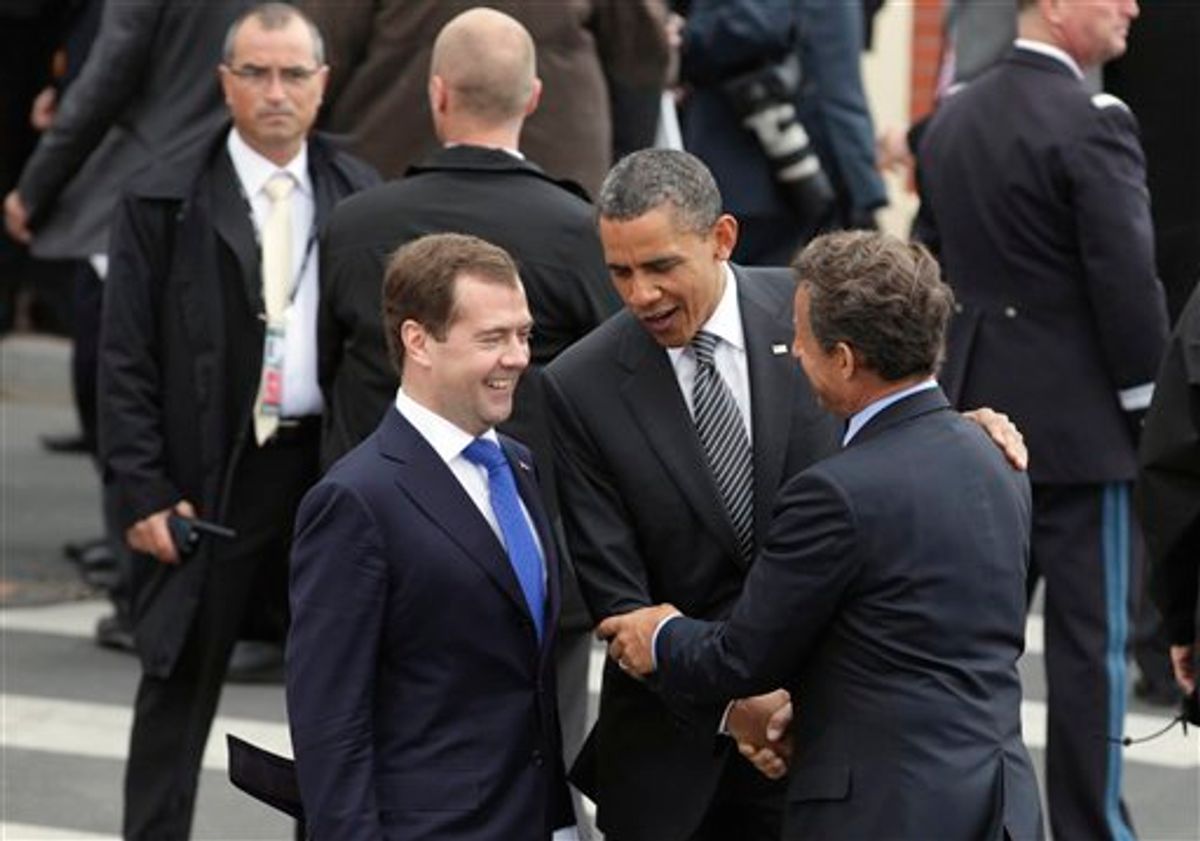 Russia offered Friday to mediate the exit of Libya's longtime leader, cranking up pressure on Moammar Gadhafi as France and Britain seek to intensify their bombing campaign.

"He should leave," Russian President Dmitry Medvedev said of Gadhafi.

Frustration is mounting in Moscow and Western capitals that the NATO campaign has dragged into its third month with no obvious end in sight. Analysts are skeptical as to whether Russia would have any leverage over Gadhafi, and the leaders of France, Britain and Germany said there's no point in negotiating directly with Gadhafi himself.

Medvedev, speaking at a news conference at the Group of Eight summit in Deauville, France, said he is sending envoy Mikhail Margelov to the rebel stronghold of Benghazi, Libya, immediately to start negotiating. Medvedev said talks with the Libyan government could take place later.

Medvedev said Russia will use its contacts with both Gadhafi's government and the rebels to try to negotiate a peaceful end to the conflict.

Russian officials have been critical of Gadhafi but also complain about what they called an excessive use of force by NATO and have urged a quick end to hostilities. Russian Foreign Minister Sergey Lavrov recently held talks in Moscow with representatives of both Gadhafi's government and the rebels.

Asked whether Russia could offer Gadhafi asylum, Medvedev gave a firm negative answer. He added that a place for Gadhafi to stay and other details could be discussed after he steps down.

Margelov told reporters earlier Friday that it's necessary to negotiate with all "reasonable" representatives of the Libyan government, including Gadhafi's sons.

A Libyan rebel spokesman, Abdel-Hafidh Ghoga, said Friday that Russia's moves to persuade Gadhafi to leave power were too little, too late.

"It's too late, and it's not a big deal," Ghoga, the vice-chairman of the opposition National Transitional Council, told a rally in the eastern city of Benghazi.

A Moscow-based Middle East expert expressed doubt that Gadhafi will agree to step down after Benghazi-based opposition leaders rejected a cease-fire agreement proposed by the leaders of the African Union in late March.

Gadhafi "will fight to the end with unpredictable consequences for everyone involved," Yevgeny Satanovsky, head of the Moscow-based Middle East Institute, told The Associated Press. "He already agreed to leave, but Benghazi needs his scalp." Satanovsky said that Gadhafi's unpredictability leaves little room for a tangible prediction of what will happen if Russia steps in as a mediator.

Rebel fighters clashed with government forces to the south and west of the rebel-held city of Misrata on Friday. Dr. Mustafa Omar of Hikma hospital said five rebels were killed and 26 wounded. It was unclear if any government soldiers were killed.

While rebel fighters have pushed Gadhafi's troops to the city's outskirts, the city, Libya's third largest, has been under siege for months, receiving food and medical supplies only by sea.

U.S. National Security Council spokesman Tommy Vietor said Russia's suggestion that it could help mediate Gadhafi's exit is "a positive development and further proof that the international community is becoming more united in its belief that Gadhafi must go."

French President Nicolas Sarkozy, hosting the G-8 summit, said Friday there is "great unanimity" about an "intensification of the military intervention" to protect civilians from Gadhafi's forces. He did not say how, but France and Britain said this week they are ready to deploy attack helicopters in the campaign.

British Prime Minister David Cameron told reporters in Deauville that the deployment of helicopters was "part of the process of turning up the pressure," on Gadhafi. He said the campaign is entering a "new phase."

"Now there are signs that the momentum against Gaddafi is really building," Cameron said. "We know that we're on the right side, we're doing the right thing, the pressure is telling."

On Thursday, Libya's government for the first time said it is prepared to speak with its rebel adversaries, signaling that months of fighting and NATO bombardment may be closer to forcing some concessions. At the same time, it insisted that Gadhafi would not relinquish power.

The commander of NATO's operations in Libya said Friday that French and British attack helicopters will operate in Libya under NATO's command, rather than under separate national command.

Canadian Lt. Gen. Charles Bouchard, speaking by video link from Naples, Italy, would not say how or where the helicopters would be used, saying only that he wanted to develop "an effective, aggressive but safe" operation. He said they could help target military vehicles that are difficult to identify from higher altitudes.

So far, the NATO campaign has relied largely on strike jets dropping munitions from an altitude of about 15,000 feet (4,600 meters). The helicopters, flying much lower and slower, could more accurately identify targets in densely populated areas while risking fewer civilian lives. But such flights would also expose the helicopter crews to greater risks.

Since March 31, NATO has commanded an international operation to protect civilians and enforce a no-fly zone, as Gadhafi has sought to put down a rebellion against his rule.

Bouchard said Friday that forces loyal to Gadhafi have laid land mines near the rebel-held city of Misrata. Previously, NATO had accused the Gadhafi regime of mining the waters off the Libyan coast.

He defended the efficacy of the NATO operation against critics who believe the conflict has become a stalemate, saying that humanitarian aid is moving more freely and many civilian lives have been saved.

"I believe today that Libya is a much safer place than it was on" March 31, Bouchard said.

Ryan Lucas in Misrata, Libya, Vladimir Isachenkov and Mansur Mirovalev in Moscow, Don Melvin in Brussels, and Jamey Keaten and Julie Pace in Deauville contributed to this report.