Why was the heinous Serbian war criminal arrested rather than killed? 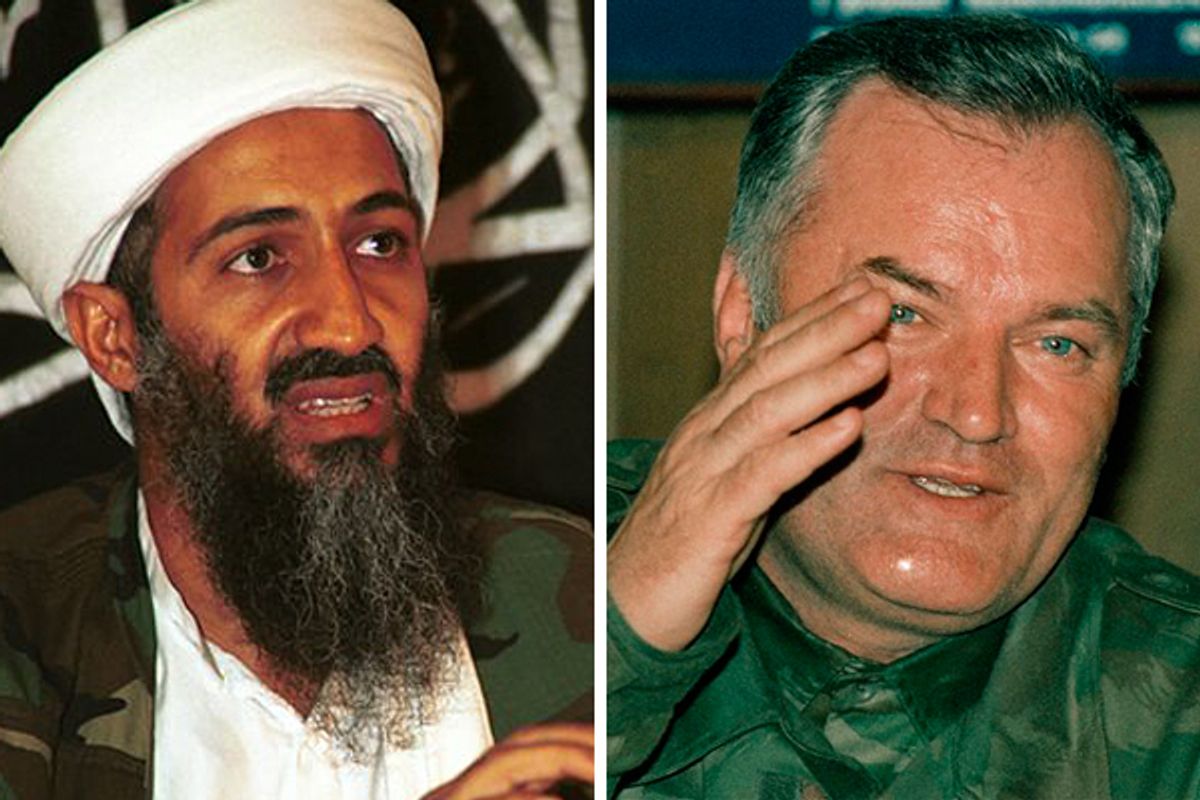 The individual whom The New York Times describes as Europe's "most wanted war crimes suspect" was captured yesterday in Serbia and will likely be extradited to be tried before an international war crimes tribunal at the Hague:

Ratko Mladic, the former Bosnian Serb general held responsible for the massacre of some 8,000 Muslim men and boys at Srebrenica in 1995, was arrested on Thursday . . .

The massacre at Srebrenica was the worst ethnically motivated mass murder on the European continent since World War II. Mr. Mladic was also accused of war crimes for the three-and-a-half-year siege of Sarajevo, in which 10,000 people died, including 3,500 children. . . .

Mr. Mladic's crimes remained an emotional issue for the Dutch, whose peacekeepers were overrun at Srebrenica, allowing Mr. Mladic’s soldiers to mow down men and boys, their hands tied behind their backs.

"His arrest gives a strong signal to the world that anyone accused of the worst crimes can be brought to justice," said Serge Brammertz, the prosecutor for the United Nations-based war crimes tribunal in The Hague.

I have two questions about this:

(1) The NYT says that, for Europe, Mladic's arrest "has a resonance on the magnitude of the killing of Osama bin Laden for Americans."  That's understandable, as the crimes of which Mladic is accused are at least as grave and serious as those bin Laden allegedly committed.  Mladic is almost certainly responsible for more deaths than the Al Qaeda leader was.  There is probably less doubt about his guilt worldwide than there was (and is) about bin Laden's.  And when he was found, Mladic "had two pistols with him" (though "he made no attempt to use" them).

In light of all that, what's the point of arresting Mladic and putting him on trial?  Why is that considered "bringing him to justice"?  Why not just pump his skull full of bullets and dump his corpse into the ocean, and then proclaim that "justice has been done"?  For those who have embraced the idea that we are "at war" with Al Qaeda, one could argue that that "war" is still ongoing while the Bosnian war has long been over, but, beyond legalisms, why is that a difference that matters?  If "justice" demands that this heinous Serbian war criminal be arrested and tried before being punished, why was the same not true for bin Laden?

(2) This European fixation on apprehending Mladic was the ultimate exercise in "Looking Backward, not Forward."  His accused crimes took place more than 15 years ago in a war that has been over for more than a decade.  He's now 75 years old, completely stripped of any remnants of power, and reportedly in ill health ("he appeared disoriented and tired, and [] one of his hands appeared to be paralyzed, possibly because of a stroke").  Moreover, his trial is certain to spawn extreme divisiveness, potentially opening up still-sensitive wounds in that region, given that -- like Slobodan Milosevic, whose arrest sparked widespread Serbian anger -- Mladic is still considered a hero by many Serbian nationalists:

Some Serbian officials also reacted with anger, illustrating that the country was still struggling to come to terms with the past. Boris Aleksic, a spokesman for the ultranationalist Serbian Radical Party, said: “Serb traitors have arrested a Serb hero. This shameful arrest of a Serb general is a blow to our national interests and the state.”

By all accounts, Serbian authorities could have arrested him long ago but finally did so because of the extreme pressure brought to bear by EU leaders.

Why is it legitimate to demand that Serbians Look Backward and risk extreme domestic divisiveness in order to punish their accused war criminals, while the U.S. refuses to do so?  Conversely, why is it legitimate to shield accused American war criminals of all accountability on the ground that investigating and prosecuting them would distract from The Future and trigger political conflict, but not allow Serbians the same luxury?  I have no doubt that there are hordes of Americans happy about Mladic's arrest while simultaneously supportive of Obama's Look Forward decree for American war criminals, all without bothering to resolve -- or even recognize -- the glaring, self-serving inconsistency at the heart of that mentality.