Are we ready for two women at once?

How Sarah Palin and Michele Bachmann could make history in 2012 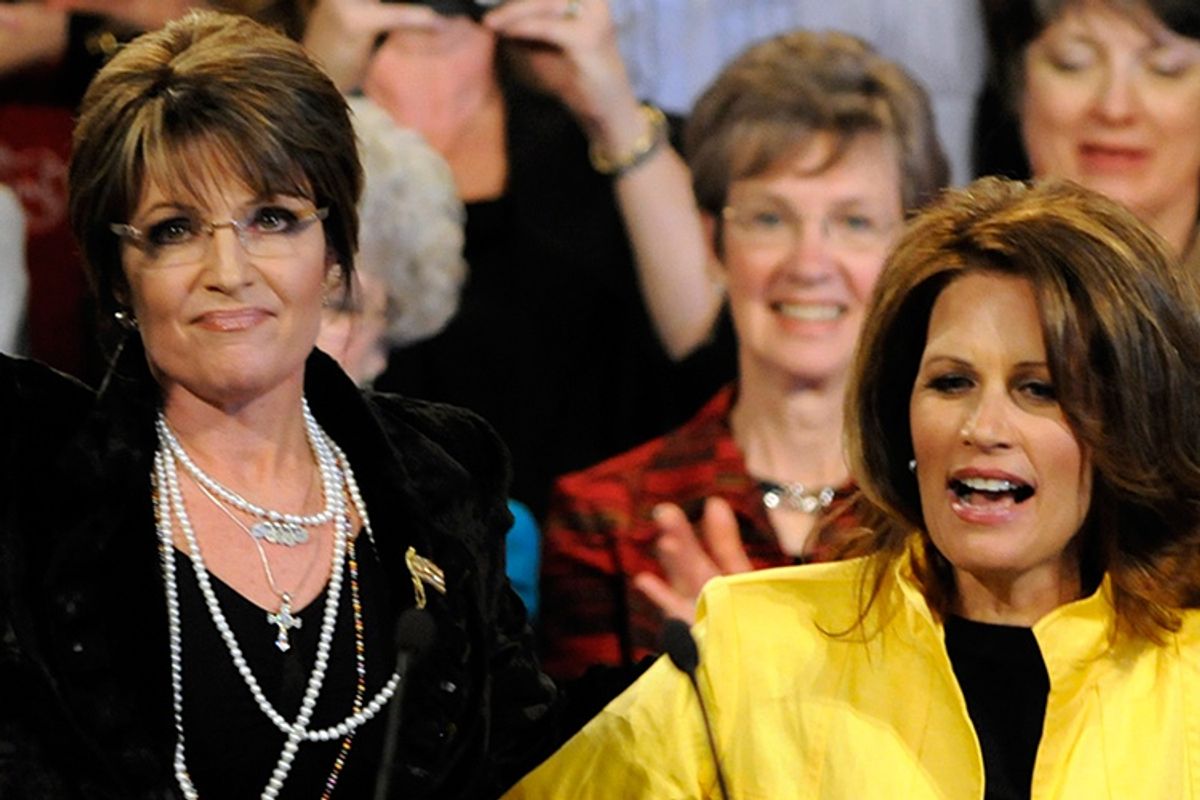 Conventional wisdom has it that there just isn't room in the Republican presidential field for both Sarah Palin and Michele Bachmann -- ideologically identical culture warriors who appeal to the same restive Tea Party base for the same basic reasons. Oh, and in case you hadn't noticed, they're both women.

This is why the idea that Bachmann, a third-term congresswoman from Minnesota, might actually mount a national campaign only gained traction in the last few months, when it began to look as if Palin -- whose stature on the national (and even international) stage dwarfs Bachmann's -- wouldn't be a candidate. Political observers began wondering if Bachmann, with her emotional appeal to hardcore conservatives, might actually be a dark horse in Iowa, potentially causing the GOP some big headaches in the early contests next year.

But now, all of a sudden, Palin is sending fresh signals -- the movie, the bus tour and so on -- that she might end up running after all. So that should pretty much close whatever opening there was for Bachmann, right?

Well, maybe not. At least for now, Bachmann isn't backing down in the face of Palin's renewed interest, telling ABC News that "My decision will be based on whether or not I think I need to run. I wouldn't see myself as running against a Republican competitor." This may mean nothing, of course -- it could turn out that Palin runs and that Bachmann ends up standing down (without ever admitting that Palin had anything to do with it). But she could also mean it.

Which raises an interesting possibility: If Palin and Bachmann do both get in, it would mark the first time in history that two women have run for president at the same time.

Until now, the closest we came to such a situation was in the 1988 cycle, when then-Rep. Patricia Schroeder and former U.N. Ambassador Jeane Kirkpatrick -- two women from different parties -- both flirted with bids at the same time.

Schroeder was the more serious of the two. An eight-term House incumbent and a prominent liberal and feminist in the 1980s, she began taking steps to seek the Democratic nomination in the spring of 1987, when her friend Gary Hart -- who had been the overwhelming front-runner -- dropped out due to a sex scandal. While she didn't officially announce her candidacy, Schroeder spent the next few months traveling the country, giving speeches, raising money, and even participating in a Democratic debate. A mid-September poll showed her tied with Al Gore for fourth place on the Democratic side. But fundraising was a problem, and Schroeder ultimately backed out, briefly losing her composure during her withdrawal speech (and sparking a national debate about gender and emotion in the process).

Kirkpatrick wasn't nearly as aggressive, but plenty of Republicans wanted her in the 1988 race. A one-time Democrat, she drifted away from the party in the late '70s during the presidency of Jimmy Carter. Kirkpatrick's staunch anti-Communism and neoconservatism found a receptive audience in Ronald Reagan, who brought her in to advise him during his 1980 campaign, then made her U.N. ambassador after his victory. Kirkpatrick became something of a rock star on the right when she delivered the nominating speech for Reagan at the 1984 Republican convention in Dallas, dubbing Democrats the "blame America first party" -- a term that can still be heard on the right today. After that speech, she was touted as a potential '88 candidate, though she resisted  entreaties to run. But as the field took shape, conservatives found themselves increasing frustrated: Two establishment Republicans, George H.W. Bush and Bob Dole, were the clear front-runners, while Jack Kemp -- who had been the right's great hope -- was fizzling as a candidate.  When conservative Sen. Paul Laxalt declined to enter in September 1987, pleas for Kirkpatrick to jump in intensified, and she agreed to make a trip to New Hampshire -- where the right-wing Manchester Union-Leader greeted her with a fawning front-page editorial. The flattery didn't work, though. Kirkpatrick left the door open for a while, then slammed it shut.

1988 is the only other modern cycle until now in which two women have shown simultaneous interest in running. Otherwise, if women have been in the White House mix at all, the rule has been one at a time: Shirley Chisholm in 1972, Lynn Martin in 1996 (she explored the race early in the cycle), Elizabeth Dole in 2000, Carol Moseley Braun in 2004, and Hillary Clinton in 2008.