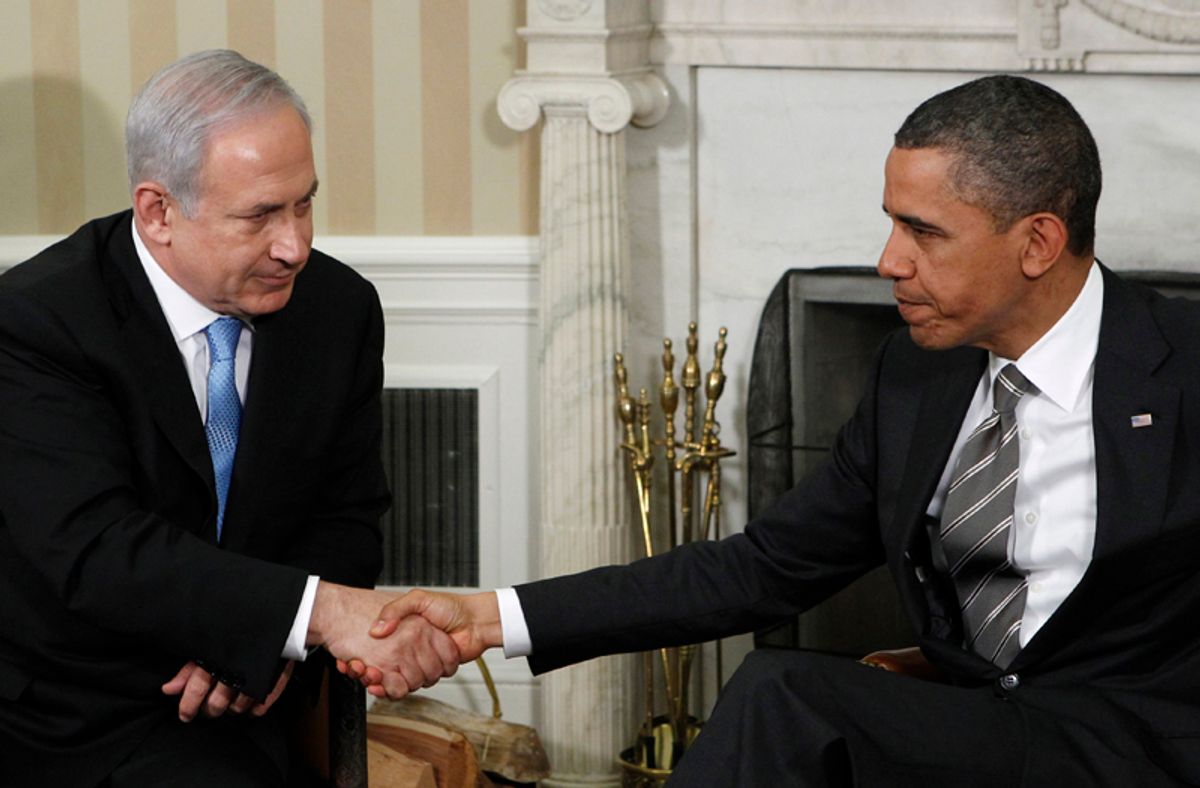 U.S. President Barack Obama meets with Israel's Prime Minister Benjamin Netanyahu in the Oval Office at the White House in Washington, May 20, 2011. Obama's call for Israel to give Palestinians territory it has occupied since 1967 stunned Netanyahu and pushed the leaders' thawing relationship back into the freezer. REUTERS/Jim Young (UNITED STATES - Tags: POLITICS) (Â© Jim Young / Reuters)
--

The old Arabic proverb has it that the dogs bark but the caravan goes on. President Obama's comments about the Israeli-Palestinian conflict in his speeches last week at the State Department and then at the American Israel Public Affairs Committee (AIPAC) produced a great deal of sound and fury in Washington. However, the sense I had being in Beirut and the Gulf when they were delivered was that they meant much less to Arabs than they did in Washington or in Israel. There is little sense in the Arab world or among Palestinians that the United States has a constructive role to play in resolving this conflict. Indeed, if anything, it has only succeeded in making itself even more of a roadblock to progress than it was before.

In both speeches the president reiterated a position taken by every one of his predecessors since Lyndon Johnson: that the United States considers the 1967 lines the basis for a settlement, as per Security Council Resolution 242. Only in Israel and on Capitol Hill was this considered news, because Obama failed to mention George W. Bush’s concession to Ariel Sharon in 2004: "In light of new realities on the ground, including already existing major Israeli populations centers, it is unrealistic to expect that the outcome of final status negotiations will be a full and complete return to the armistice lines of 1949." The speech to AIPAC reprised that important concession, albeit in a slightly less fulsome form, referring simply to "new demographic realities on the ground."

This provision aside, the speech repeated every key talking point of the current Israeli government:

A settlement must involve Palestinian acceptance of "Israel as a Jewish state and the homeland for the Jewish people," which means that the 1.4 million Palestinians who live inside Israel must remain second-class citizens, or worse, and that the Palestinians must renounce the idea that the entirety of Palestine is also their homeland. The "homeland" of the Palestinians is rather whatever scraps of pre-1948 Mandatory Palestine can be salvaged in negotiations with Israel, presumably around 20 percent of the country.

Israel's "basic security concerns (no mention of course of security for the Palestinians, who need it most) is to be a key determinant of a settlement. Given how all-encompassing and elastic are the requirements of Israeli "security," this basically means Israel can trump pretty much any aspect of a settlement it does not approve.

Linked to the acceptance of Israel’s security needs is the proviso that a Palestinian state would have to be "non-militarized." Since a settlement would have to "provide effective border security," that presumably means acceptance of the Netanyahu government’s new demand to continue to control the Jordan River valley, and thus this Palestinian "state’s" borders, into the indefinite future.

No involvement of Hamas in the process unless it accepts preconditions such as renunciation of violence and recognition of Israel prior to negotiations, preconditions that, needless to say, are not imposed on the other side. Given the recent inter-Palestinian reconciliation, this in effect rules out negotiations. In the AIPAC speech this condition is stated in an even more muscular fashion than previously: The inter-Palestinian reconciliation is described as "an enormous obstacle to peace."

There is to be further postponement (after a 20-year postponement at the insistence of Israel, starting at Madrid in 1991), of dealing with the central issues of refugees and Jerusalem. This means that Israel is free to continue to build in occupied Arab East Jerusalem, drive out as much as possible of its Palestinian population, change the names of places, erase historical landmarks and otherwise make the city as Jewish as Tunbridge Wells is English.

There is to be no "delegitimization" of Israel (a brand-new American adoption of a right-wing Israeli term) via taking the issue of Palestinian statehood to the U.N., since, as the president stated to AIPAC, a Palestinian state must come into being as a result of negotiations, not a U.N. resolution. The president’s speechwriters apparently failed to recall that the state of Israel came into being as a consequence of General Assembly Resolution 181.

Any sensible Israeli government (these days perhaps a contradiction in terms) would jump at this as a basis for negotiation, or at least as an opportunity to make the Arabs appear to be rejectionists who oppose the wishes of Washington. It is an indication of how far Israel has swung to the right that this was not Netanyahu’s immediate reaction. But he heads a coalition government whose only common denominator is a commitment to settlement expansion, holding on to occupied Palestinian territory, and opposition to serious negotiations with the Palestinians.

The campaign for the American presidential elections of 2012 is already underway. Obama and the Democrats are already in defensive mode as they face vicious sniping from Republican leaders about "throwing Israel under the bus," "betrayal of the only democracy in the Middle East" and so forth. The Israeli-Palestinian issue has already become a political football, and the American adage that politics stops at the water’s edge clearly does not apply to it.

Given the ongoing revolutionary changes in the Arab world, and their profound impact on the Palestinians, as could be seen in the inter-Palestinian reconciliation, and the march of Palestinians to the borders of Israel from five directions on May 15, events in the Middle East have in any case passed President Obama by. This is not only because his hands are tied by the onset of the presidential election campaign. He is also the victim of the bad advice of veterans like Dennis Ross, who have helped steer administrations since that of Ronald Reagan in the wrong direction.

In view of these factors, there should be no surprise that where actual peacemaking is concerned, Washington is a day late and a dollar short.