What is the Palestinian right of return, anyway?

We explain what GOP presidential hopeful Herman Cain couldn't: One of the crucial issues of the Mideast conflict 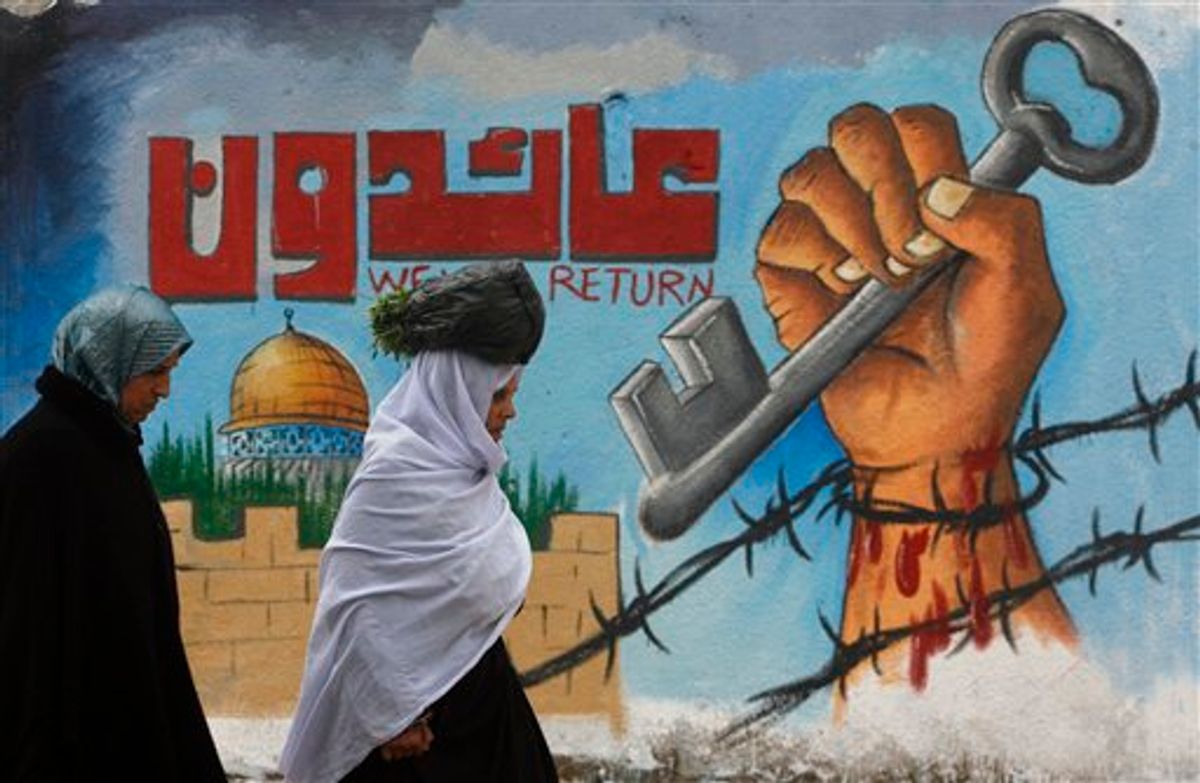 Palestinians walk past a painted wall during a rally marking the upcoming 63rd anniversary of the Nakba, or catastrophe, the Arabic term used to describe the uprooting of hundreds of thousands of Palestinians with the 1948 creation of the state of Israel, in Rafah refugee camp, southern Gaza Strip, Saturday, May 14, 2011. Graffiti painting symbolically depicts the loss of the homes of Palestinians in 1948. ( AP Photo/ Eyad Baba ) (AP)
--

On Fox News this past week, GOP presidential hopeful and unconditional Israel supporter Herman Cain fumbled over a question about the Palestinian right of return.

Asked by Fox's Chris Wallace where he stands on the matter -- one of the key "final status issues" if there is ever to be a two-state solution in Israel-Palestine -- Cain awkwardly fumbled, before saying that "it should be negotiated."

Watch, starting at around the 10-minute mark:

The next day, Cain admitted that he had no idea what "right of return" even meant, but, after beefing up on the issue, he had concluded that it was not a "right" at all and he shared the official Israeli view on the matter.

That got us thinking: How many other presidential candidates could define the right of return and explain its history? How many members of Congress? The public?

I spoke to Hussein Ibish, a senior fellow at the American Task Force on Palestine, to get answers on the basics of the right of return.

Who are the Palestinian refugees and how did they become refugees?

In approximately November of 1947, what was in effect a civil war broke out between the Jewish settler community and the Palestinians in Mandatory Palestine, which was still under British control. Between November 1947 and May 1948 there was a significant displacement of Palestinians. The first wave was largely Palestinians fleeing conflict zones with the expectation of return. After April 1948 the mainstream Jewish forces and some other militias went on the offensive, and then there were large-scale expulsions of Palestinians as well. In the conflict that followed -- with the withdrawal of the British, the declaration of the establishment of the state of Israel in May 1948, and the intervention of five Arab armies -- there were additional people who fled and additional people who were forcibly expelled. Some Israeli leaders who participated in forced expulsions, like the late prime minister Yitzhak Rabin, wrote extensively about the experience. In his memoirs he discussed his role as the commander of the forces that expelled tens of thousands of Palestinians.

But the question of intention is still debated?

Yes, the question is debated on both sides. There are people who will say the blame lies primarily with the Arabs, and there are others who will say this was a deliberate and conscious Israeli policy that was prepared before the war began and then implemented. There are still others that say there was no specific plan but this is generally the way things went. As with most elements of history, the facts are not disputed by most honest historians. But the interpretation is disputed.

The crucial thing is not necessarily that people fled and were expelled, but that Palestinians have not been allowed to return. There's a real debate about how many were expelled versus how many fled, but there's no doubt that all of them were denied return. And in the Palestinian case, very unusually, refugees are classified as both the people who were displaced and their descendants. So the population of refugees as recognized by the United Nations has actually increased over time.

So how many refugees are there and where do they live?

The biggest group of refugees are in the occupied Palestinian territories. Most of the population of Gaza are refugees from what became southern Israel. There are also very large refugee camps in the West Bank. The U.N. now classifies about 4.5 million people as Palestinian refugees. They estimated originally in 1948 there were about 700,000 refugees. The current number breaks down to 1.1 million in Gaza and 800,000 in the West Bank; slightly under 2 million in Jordan; around 400,000 in Lebanon; around 400,000 in Syria; with smaller groups elsewhere.

What is the official Israeli position on the refugees?

The Israeli view is, as Prime Minister Netanyahu said, that the problem of refugees will be settled outside of Israel. There's never been an Israeli government that has seriously considered a wide-scale implementation of the right of return. I think most Palestinian negotiators have understood this from the beginning but it's a crucial card for them. It's the most painful concession they are likely to have to make. It is a right enshrined in international law and it is a key part of the Palestinian national narrative. Most observers have considered that the analogous Israeli challenge is compromise on Jerusalem. No Israeli government is going to sign an agreement that opens up Israel for millions of Palestinians to return and change the demographics of the Israeli state. Similarly, no Palestinian leadership is going to agree to a deal that doesn't involve the Palestinian capital being based in East Jerusalem.

Legally speaking, what are the roots of the right of return?

The Palestinians base their claim on many aspects of international law. First there is U.N. Resolution 194 from 1948 that says that refugees wishing to return to their homes and live at peace with their neighbors should be permitted to do so at the earliest practical date, and compensation should be paid to those that choose not to. The Israelis respond that "live at peace" has been an issue and that's why the right was denied. In addition, all four of the Geneva Conventions provide for some version of the right of return. It's there in the International Covenant on Civil and Political Rights. It's in the American Convention on Human Rights, etc. In the case of the Balkan wars and Kosovo, there was a very strong citation of refugee rights -- the right not to be expelled was the casus belli of the international intervention in Kosovo in 1999. And Security Council Resolution 1255 in 1999, regarding the conflict in the republic of Georgia, referred to the "unconditional right to return" of refugees.