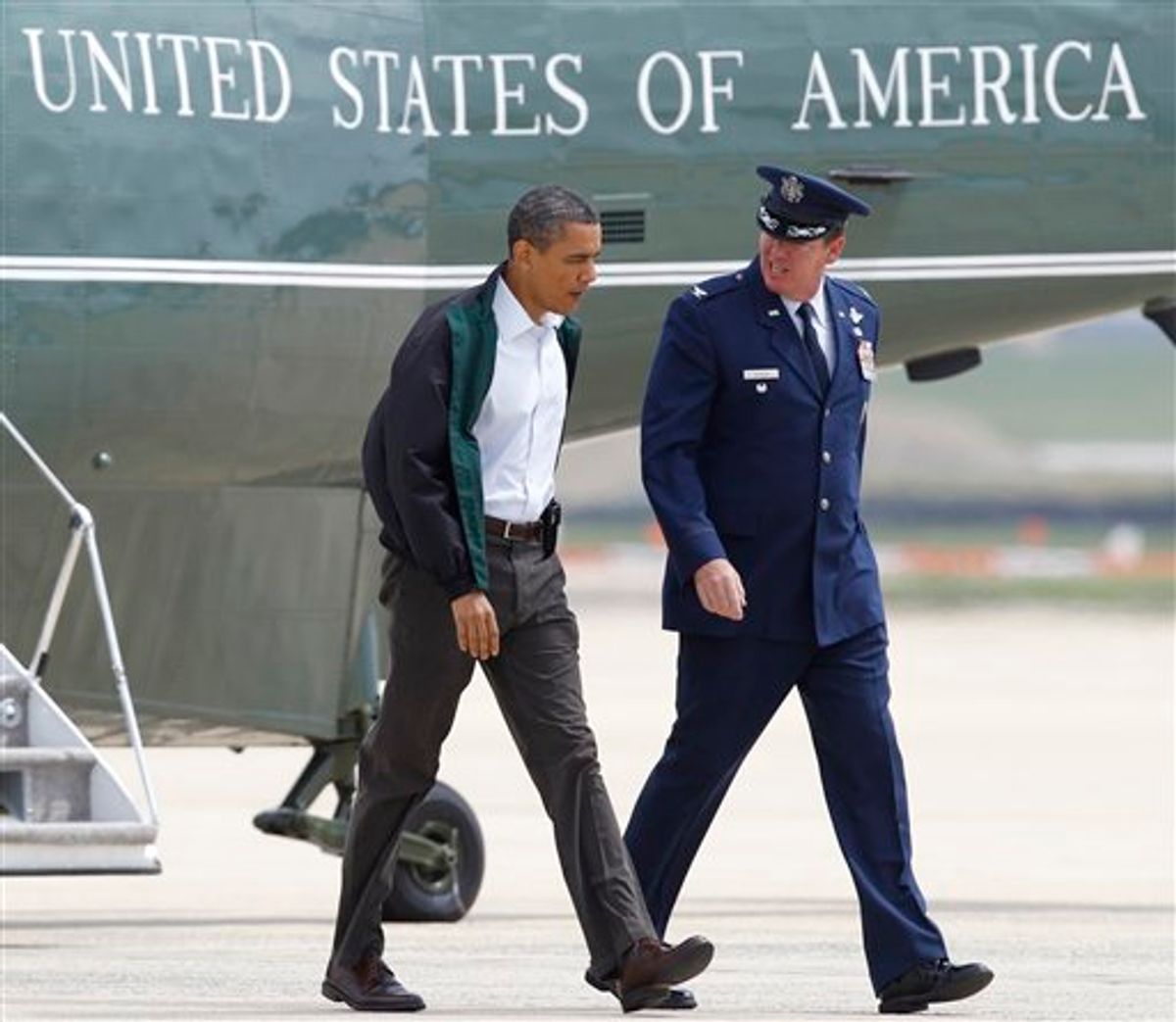 Europe's splendor behind him, Missouri rubble in front of him, President Barack Obama on Sunday toured the devastation wrought by a monster tornado, consoled the bereaved and committed the government to helping Joplin rebuild until the job is done.

"This is not just your tragedy. This is a national tragedy, and that means there will be a national response," Obama said.

Air Force One flew over a massive swath of brown as far as the eye could see -- a landscape of flattened houses and stripped trees -- on its approach. Missouri Gov. Jay Nixon and others greeted him on the tarmac before they set out for their first stop, a walking tour of a destroyed neighborhood. A memorial service later was punctuating a day of remembrance one week after the disaster.

Obama's motorcade pulled into a neighborhood where downed trees cleaved open houses, roofs were stripped or blown off, cars were cratered and splintered wood was everywhere. He saw nothing whole, but rather small domestic sights -- a view into a room with a TV still in place, a recliner sitting amid rubble, a washer-dryer standing next to a decimated house. American flags were planted here and there in the mess.

"Sorry for your loss," Obama told an anguished woman, hugging her twice as they talked. Another woman told him that her uncle lives up the road -- he survived but his house did not. "Tell your uncle we're praying for him," the president said.

To those working at the scene, the president said: "We appreciate everything you guys are doing. God bless you." One volunteer told him that people were streaming in from other states to help any way they could.

Obama vowed: "We are going to be here long after the cameras leave. We're not going to stop 'til Joplin's back on its feet."

Obama returned to the U.S. on Saturday from a six-day European tour of Ireland, Britain, France and Poland. After days of focusing on the U.S. relationship with the rest of the world, he turned to an even more critical connection: his own, with the American people. He was visiting survivors and the bereaved from the worst tornado in decades, which tore through Joplin a week ago leaving more than 120 dead and hundreds more injured. At least 40 remain unaccounted for, and the damage is massive.

Consoling his fellow Americans is a task Obama has had to assume with increasing frequency of late, after the mass shooting in Arizona in January in which Rep. Gabrielle Giffords was injured, when tornadoes struck Tuscaloosa, Ala., last month and, more recently, when flooding from the Mississippi inundated parts of Memphis, Tenn.

Such moments can help define a president, but habitually even-tempered Obama is more apt to offer handshakes and hugs than tears and deep emotion.

Though times of trouble can erase politics and unite people, a phenomenon Obama has commented on, his task as healer Sunday unfolded on unfriendly political ground as his re-election campaign approaches. Obama narrowly lost Missouri to Republican John McCain in 2008, but in Jasper County, where Joplin is located, McCain won by a large margin: 66 percent to 33 percent.