Obama cracks down on abuses by big-city police departments 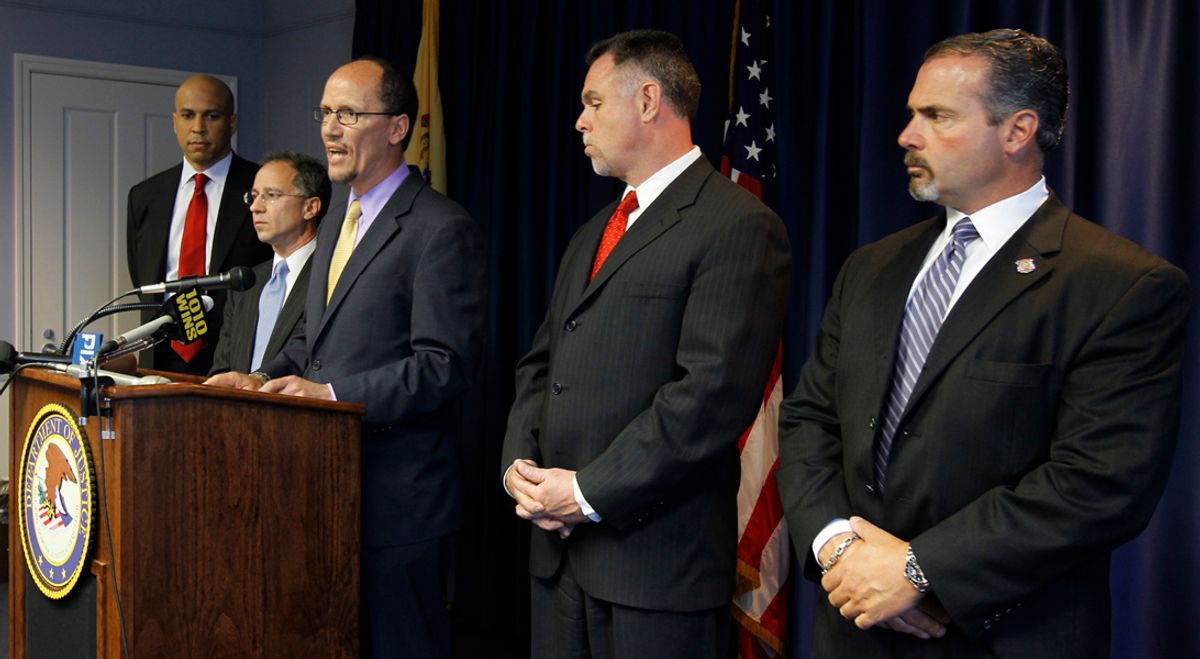 Thomas Perez, Assistant Attorney General for the Civil Rights Division, center, talks about a federal investigation of the Newark Police Department during a news conference, Monday, May 9, 2011 in Newark, N.J. Standing with him are, from left, Newark Mayor Cory Booker, U.S. Attorney for the District of New Jersey Paul J. Fishman, Newark Police Director Garry McCarthy and Acting Newark Police Director Sam DeMaio. The Department of Justice on Monday announced an investigation into the policies and practices of the police department of New Jersey's largest city. The move comes months after the state American Civil Liberties Union complained of rampant misconduct and lax internal oversight at the Newark Police Department, although federal and city officials insisted that the ACLU's petition wasn't the main reason for the probe. (AP Photo/Julio Cortez) (Julio Cortez)
--

In a marked shift from the Bush administration, President Obama's Justice Department is aggressively investigating several big urban police departments for systematic civil rights abuses such as harassment of racial minorities, false arrests, and excessive use of force.

In interviews, activists and attorneys on the ground in several cities where the DOJ has dispatched civil rights investigators welcomed the shift. To progressives disappointed by Eric Holder's Justice Department on key issues like the failure to investigate Bush-era torture and the prosecution of whistle-blowers, recent actions by the DOJ's Civil Rights Division are a bright spot.

In just the past few months, the Civil Rights Division has announced "pattern and practice" investigations in Newark, New Jersey and Seattle. It's also conducting a preliminary investigation of the Denver Police Department, and all this is on top of a high-profile push to reform the notorious New Orleans Police Department -- as well as criminal prosecutions of several New Orleans officers.

The "pattern and practice" authority comes from a 1994 law passed by Congress after the brutal beating of Rodney King by white Los Angeles police officers, who allegedly yelled racial slurs as they hit him. The law allows the DOJ to sue police departments if there is a pattern of violations of citizens' constitutional rights -- things like an excessive use of force, discrimination, and illegal searches. Often, after an investigation, the police department in question will enter into a voluntary reform agreement with the DOJ to avoid a lawsuit and the imposition of reforms.

"Under the Bush administration, the Justice Department disappeared here in terms of federal civil rights enforcement. You could see the shift to counterterrorism at the ground level after Sept. 11," says Mary Howell , a New Orleans civil rights attorney who has been working on police misconduct cases for more than three decades. "Now they're back doing criminal prosecutions of police and the civil rights investigation, which is huge."

Many of the New Orleans officers being criminally prosecuted -- several of whom have been convicted -- were involved in grisly killings of innocent city residents in the chaotic days after Katrina. A separate civil rights investigation by the DOJ recently concluded that the New Orleans Police Department has engaged in excessive use of force, unconstitutional arrests and racial profiling. An independent monitor is expected to be appointed to make sure the department follows through with reforms in training, policies on the use of force, and accountability to the public.

The allegations of civil rights violations being investigated by the DOJ are often quite brutal but do not make the news outside the cities where they occur.

In one case in Seattle last year, an officer investigating a robbery was caught on video stomping on the head of a Hispanic detainee lying on the ground on the street after yelling, "I'm going to beat the fucking Mexican piss out of you, homey!" The detainee turned out to have nothing to do with the crime under investigation and was later let go.

In Newark, the state chapter of the ACLU last September asked the DOJ to intervene, citing the city police department's failure to respond to hundreds of misconduct complaints in the past few years.

In one case described in the ACLU's petition, two Newark officers allegedly threatened to throw a juvenile over a bridge when he refused to confess involvement in a crime. "Told by a supervisor to take [the boy] home, they instead took him to a secluded location, beat him, urinated on him, and left him there," according to the ACLU's letter. The department's internal affairs unit later claimed to have lost the soiled T-shirt the boy had brought in as evidence.

Deborah Jacobs, executive director of the ACLU of New Jersey, tells me that an official in the Civil Rights Division actually called her group a few weeks before it submitted its petition to seek more information about a misconduct case that had been reported in the media. "I had never before gotten a call from the DOJ asking about a police misconduct case," says Jacobs, who has worked at state-level ACLU chapters since the early 1990s.

Newark Mayor Cory Booker, a rising star in the Democratic Party, dismissed the ACLU's report on civil rights abuses back in September, accusing the group of "casting unnecessary aspersions on the police department through the distortion of facts." But when the DOJ announced its formal investigation earlier this month, Booker stood at a press conference with federal officials and said he welcomed the move. Given that many of the alleged violations -- and the failure of the police department to respond to complaints -- happened on Booker's watch, the episode will likely be seen as a blot on his record.

The man who is at least partly responsible for crackdown on police misconduct is Thomas Perez, assistant attorney general for the Civil Rights Division. In the 1990s, Perez, the son of Dominican immigrants, was a prosecutor in the division working on police misconduct cases; he later served as special counsel to Ted Kennedy on civil rights issues. The DOJ declined my request to interview Perez. But he has made it publicly clear that things have changed since the Bush years.

"In case you haven’t heard, the Civil Rights Division is once again open for business," Perez told a police oversight association last September, pointedly adding, "There were very few [pattern and practice] cases during the prior administration."

He also offered a window into his thinking when I interviewed him last year about the situation in New Orleans, home to the most notorious police department in the country. "Criminal prosecutions alone, I have learned, are not enough to change the culture of a police department," Perez said then.

Jennifer Shaw, deputy director of the ACLU of Washington, tells me Perez came to Seattle last fall to meet informally with civil rights attorneys in the city and seek feedback and input. "My sense is that when Tom Perez came in, the entire attitude and approach changed," Shaw says.

According to the Justice Department, 22 pattern-and-practice investigations were opened during the Bush administration, and eight have been opened during Obama's presidency. But the Bush-era investigations largely involved quite small departments. Perez has been leading the Civil Rights Division for about 18 months (his confirmation was blocked by Republicans for six months), and high-profile investigations of three big-city departments have already been opened, with another probe in Denver possibly on the way.

The DOJ's investigations of troubled large departments "sends a message to the whole field," says Sam Walker, an emeritus professor at the University of Nebraska who studies police accountability.

"The primary victims of police misconduct are African-Americans and Latinos. The Bush administration simply wasn't interested in this," Walker says. "The Obama-Holder DOJ puts a very high priority on this."