What's behind America's love of barbecue?

Even George Washington couldn't turn down a good cookout. Why are we so drawn to open flame? 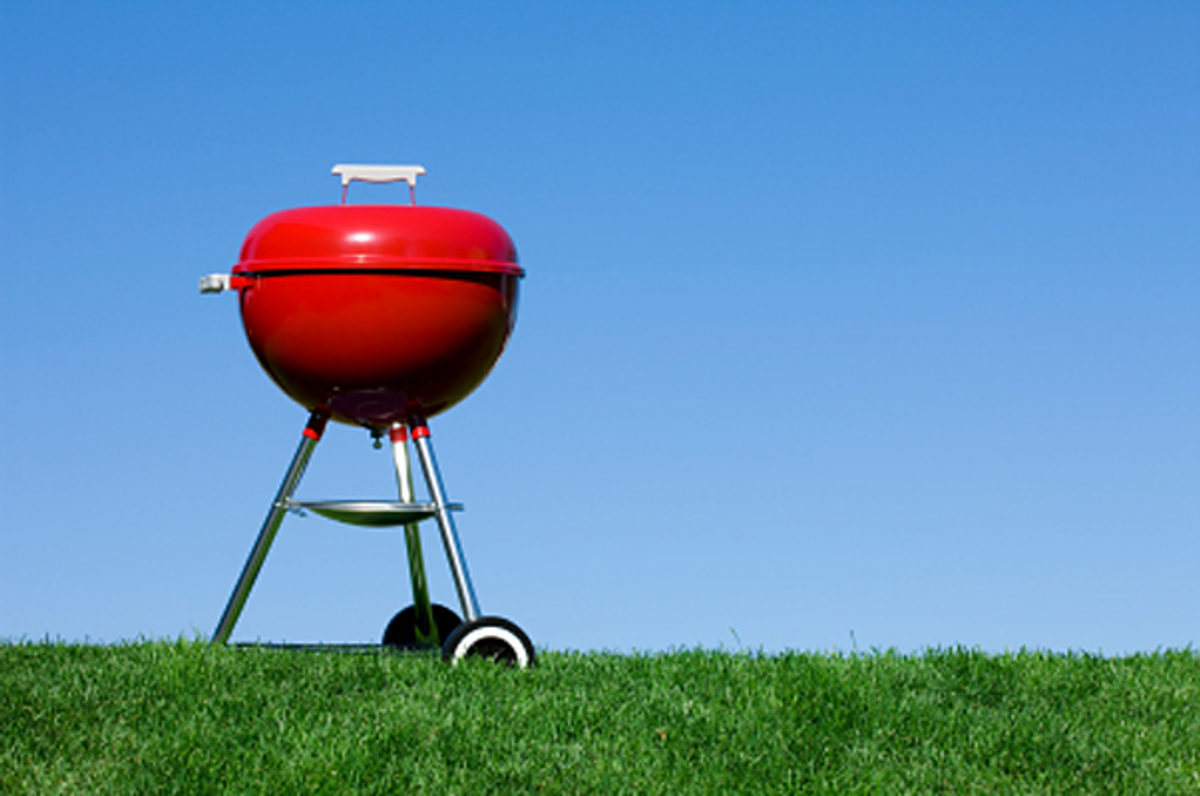 With Memorial Day weekend kicking off the barbecue season, we thought it appropriate to spill some ink on the great American tradition.

As a Yankee, I wouldn't dare to pontificate on the contentious history of barbecue as a food -- better leave that to the Southerners. But as an enthusiast of grilled meat and backyards, I certainly feel qualified to hold forth on that other use of the word "barbecue": the outdoor cookout.

As far as popular human activities go, roasting animals over outdoor fires is right up there with sex and fighting. Every culture has some version of the pursuit -- from the Argentinean asado to the traditional Hawaiian luau. Rituals and traditions swirl around grilling, from the profound (ancient Hawaiians roasted the pig as an offering to the gods) to the prosaic (Dad's famous beer-based barbecue sauce). The word "barbecue" was introduced to the American colonies from Haiti and originally referred to the grilling rack, and then to the meat itself. By 1733 it also denoted a social gathering that revolved around roasting an animal. By 1931, Northerners and Westerners would be using the word to describe any outdoor event involving meat and coals. (Incidentally, the word "asado" has a similar dual meaning in South America, where it used to describe a grilling technique and a social function.)

Whatever your linguistic interpretation, Americans were barbecue enthusiasts from Day One. George Washington, a notoriously terse diarist, actually recorded all the barbecues he attended or hosted. For example, the entire entry for August 4, 1769, reads: "Dined at the Barbicue with a great deal of other Company and stayd there till Sunset." My favorite is another one-liner: "Went in to Alexandria to a Barbecue and stayed all Night." As our first president, he was also responsible for our first presidential barbecue.

Just as a keg of beer was an important feature of early American polling places, so the barbecue has long been used to lure reluctant voters. Lyndon Johnson built his campaign around Texas-style barbecues, a variation on an old tradition: In the 19th century, roast pig and whiskey were staples at political rallies. (One can imagine that whiskey and slow-roasted pork might put potential voters in a more convivial frame of mind.)

Early barbecues revolved around the roasting of the whole animal, or sometimes several. Under the headline "Midwest Merchants Will Feast at Big Barbecue," in 1917 a Nebraska newspaper called the Red Cloud Chief reported: "The schedule of food already includes one ox, one sheep, and two pigs which will be barbequed. In addition the necessary fixins will be added to make the meal delightful and satisfying." Needless to say, these early barbecues were large events. The small backyard "barbecue" or, more accurately, cookout, didn't become wildly popular until much later. Improved grilling technology was a factor: George Stephen Sr., a worker at the Weber Bros. Metal Spinning Co., invented the Weber grill in 1951. The new grill was inexpensive and allowed backyard grillers to control the temperature by adjusting a circular vent. "Barbecues" were a fad in the suburban culture of the 1950s, possibly because grilling offered an excuse to show off that other burgeoning American fixation -- the lawn. Or maybe the explanation for the institution is simpler. As James Beard noted: "Eating outdoors is one of life's finest pleasures. It is not just a trick of the imagination that makes food smell and taste better under blue skies or under the stars. The fire in your grill and the freshness of the air add savor to every dish, whether it is served in a patio, a back yard, a picnic grove or on a stretch of sand or grass on lake, stream or ocean."

The tradition of outdoor grilling, which spans from the natives of Haiti to the lawns of the White House, is entwined with Memorial Day, a holiday that sprang from the hearts of the American people. It sounds hokey, but it's true. Dozens of towns and cities claim to be the originators of Memorial Day because dozens of towns and cities spontaneously created their own days of remembrance to honor the Civil War dead. Eventually the military followed suit: In 1868 Gen. John Logan, national commander of the Grand Army of the Republic, declared an official day of remembrance. The first national Memorial Day, or Decoration Day as it was called then, was celebrated at Arlington National Cemetery on May 30 of the same year. As time passed, the day would change to meet the needs of the American people. In the aftermath of World War I, American grief dictated that Memorial Day expand to honor all of our fallen soldiers. More than 100 years later, Congress declared Memorial Day a national holiday. Naturally, a three-day weekend at the outset of summer had Americans thinking "barbecue." And another tradition was born.

I can't think of Memorial Day barbecuing without thinking of my friend Kevin. A big, bearlike guy with a biker's beard and a kid's heart, Kevin is often found by the four grills in his small backyard. He has long cherished his one inheritance from his beloved Uncle Bill: Bill's secret barbecue sauce recipe, which was passed down to Kevin and Kevin alone. When I asked Kevin if he'd be willing to share the recipe with our readers, he hesitated long and hard. "Only if you say something about Bill's service in Korea -- that was very important to him."

Mentioning Uncle Bill's service in Korea certainly seems appropriate for Memorial Day. Uncle Bill didn't die in battle, but he served his country with distinction: He was awarded the Silver Star, he was dedicated to veterans' affairs, and he attended to the needs of vets who were going through tough times.

Though Bill was serious about helping his fellow veterans, Kevin also remembers him as the black sheep of the family, an eccentric trickster with a healthy appetite for booze. "He had a sharp wit and could slay you with a smile. He didn't follow the normal paths in life," Kevin remarks, and tells several funny stories about carousing with his uncle. But he's quick to point out: "He did whatever it took to make sure his family was taken care of, and he was the type of guy that would talk to the governor of the state in the exact same way he would address a homeless man; both of them would walk away knowing that Bill generally cared for them as fellow humans."

"Uncle Bill would stand behind the grill in his red-and-white-striped apron, drinking beer and barbecuing the whole time, while us kids worked on destroying everything. Even when everyone sat at the picnic table to eat, Bill would eat his plate standing at the barbecue and use it like a podium to direct the conversation of the whole family," Kevin says, stirring his barbecue sauce and taking a sip of beer.

Purists lament that many Americans now see Memorial Day as an excuse to barbecue and have a good time. And while I certainly agree that the day should be spent honoring our lost soldiers, in Uncle Bill's case, a barbecue seems a perfect tribute.