The slog of "The Killing" continues 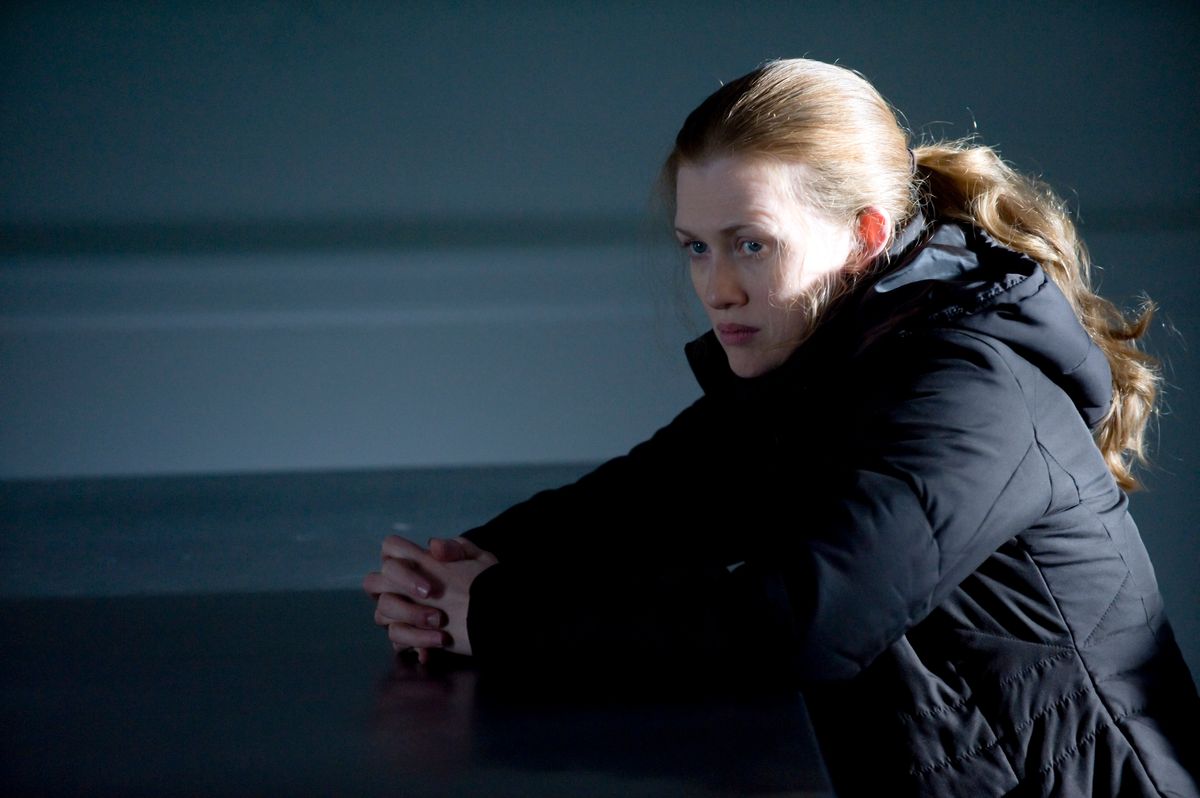 If AMC is indeed thinking about giving "The Killing" another season, despite the mind-boggling disappointment of this one, it should build the story around an investigation of the detectives' incompetence. That would save a bit of production money by re-using Season 1 footage in flashbacks. It might also provide a tiny bit of catharsis for viewers who took the network at its word when it promoted the show as a more intelligent, serious take on the murder mystery genre. To quote Ricky Ricardo on "I Love Lucy":  Seattle PD, you got  some 'splainin' to do.

Last night's episode, ironically but appropriately titled "I'll Let You Know When I Get There", was much stronger than its predecessor, and the direction (by Ed Bianchi, one of the best series TV directors alive) was smashingly atmospheric. But that's hardly a compliment considering how horrible last week's episode was. And at a script level, this one wasn't anywhere close to being the Hail Mary pass that the show needed to make up for its gross violations of common sense, not to mention its borderline cruel deception of an audience that thought it was committing to a semi-plausible portrait of a murder's impact on a community but ended up stuck in a super-slow-motion version of a "Law and Order: Criminal Intent" episode.

For grins, let's set aside the non-starter nature of the political storyline (though I still think there's an outside chance that Bill Campbell will end up being revealed as the killer, because otherwise what's the point of hiring Bill Campbell) and the series' almost total disinterest in the murder victim, Rosie Larsen, as a person, and marvel at the incompetence of Det. Linden and Det. Holder.

They're presented as bad employees but brilliant cops; yes to the first, no to the second. They showed flashes of inspiration this week in the interrogation room scene opposite Belko; I love the business with Linden coming on like the disciplinarian mom that Belko never had, then tenderly stroking his hair to put him at ease. But for the most part these sleuths are terrible. Their employee evaluations should be festooned with cartoon drawings of poo with wavy little stink lines. I think we're supposed to take those scenes where their commander berates them as the moody cable drama equivalent of scenes in a "Lethal Weapon"-type action flick where the maverick cops' superior officer barks, "I want your badges and your guns on my desk right now! I am relieving you of duty!"; problem is, this appears to be a rare case where the screen cops' thickheadness and inability to follow basic procedure so overwhelms any good they do in the field that the commander is justified in jumping down their throats. Alas, I am not convinced that "The Killing" actually realizes that, immersed as it is in paranoid thriller atmospherics.

So Rosie apparently took a cab that night? And the detectives are just now figuring that out on day 10 because neither of them thought to phone cab companies on day one? And neither of them recognized the key chain logo as the logo of a Native American casino that countless felony suspects have surely visited throughout their tenure as cops? And neither of them thought that "Adela 10:45" might not refer to a mysterious female named Adela? And it never occured to Linden in particular that "Adela" might refer to the name and departure time of a ferryboat that she passes on her jogging route? And what's up with Linden and Holder constantly dropping in on potential subjects for 45 seconds at a time, accomplishing nothing except making them seem menacing and loopy? Holder dropped in on Belko just long enough to seem creepy and dumb and junkie-like -- and the longer I watch this show, the more Joel Kinnaman's faux-gangsta whiteboy accent starts to remind me of Poochie the Dog -- and Linden dropped in on Councilman Darren Richmond just long enough to have a drink and admit she screwed up, which just made her seem unprofessional and spacey.

And Linden's solution to her son's lack of discipline is to move him to a motel where he can live completely unsupervised while she toodles around Seattle, making frowny faces and screwing things up in ways that make the Larsen family's already miserable existence exponentially worse? Say what? (The red herring plot that wrongly fingered teacher Bennet Ahmed as a prime suspect directly caused Ahmed's near-death at the hands of Stan Larsen and his surrogate son/toady Belko; by now, ambulance chasing attorneys should be lining up around the block to represent the Larsens in a civil suit against the city.)

There were intimations that Linden is a "Manhunter"-style brilliant burnout whose commitment to the job once drove her insane -- thus her boyfriend's stray comment about not wanting to visit her in a hospital again, watching her stare at blank walls -- but at least in "Manhunter," you got the impression that Det. Will Graham really was brilliant, and therefore worth all the trouble he caused. That's clearly not the case with either detective assigned to the Larsen case, no matter how strenuously the scripts insist otherwise.

The scene where the detectives visit Belko's mother might have been the worst scene in the entire season to date. Really, "The Killing"? The aging prostitute mom who raised her son in a brothel and once murdered his favorite pet and putters around yammering and chain-smoking while dressed like Blanche DuBois in a community theater production of "A Streetcar Named Desire"? The scenario was weak, and the acting was even weaker. After a certain point I wanted to jump into the screen and beg the actress to stop saying the word "Belko."

And on an especially vexing side note, why is it that TV is filled with alleged genius characters whose commitment to their jobs destroys their personal lives, yet it's almost always the women who are singled out for condemnation? No, Linden isn't going to win any prizes as a girlfriend or mother. But this fixation on her personal shortcomings smacks of a double standard.

Who's left as a suspect? Besides Campbell, the basketball-obsessed billionaire strikes me as a possible; there's a  gambling sub-theme running throughout this season, and I'm guessing that's what those mysterious withdrawals from the Larsens' bank accounts are all about. But really, on an "anything goes" series like this one, it could be somebody we haven't met yet. Wouldn't it be great if Linden entered the casino in next week's episode, was greeted by former heavyweight champion George Foreman in a Sitting Bull outfit, and somehow figured out that he did it? And then had to fight him? In a boxing ring?