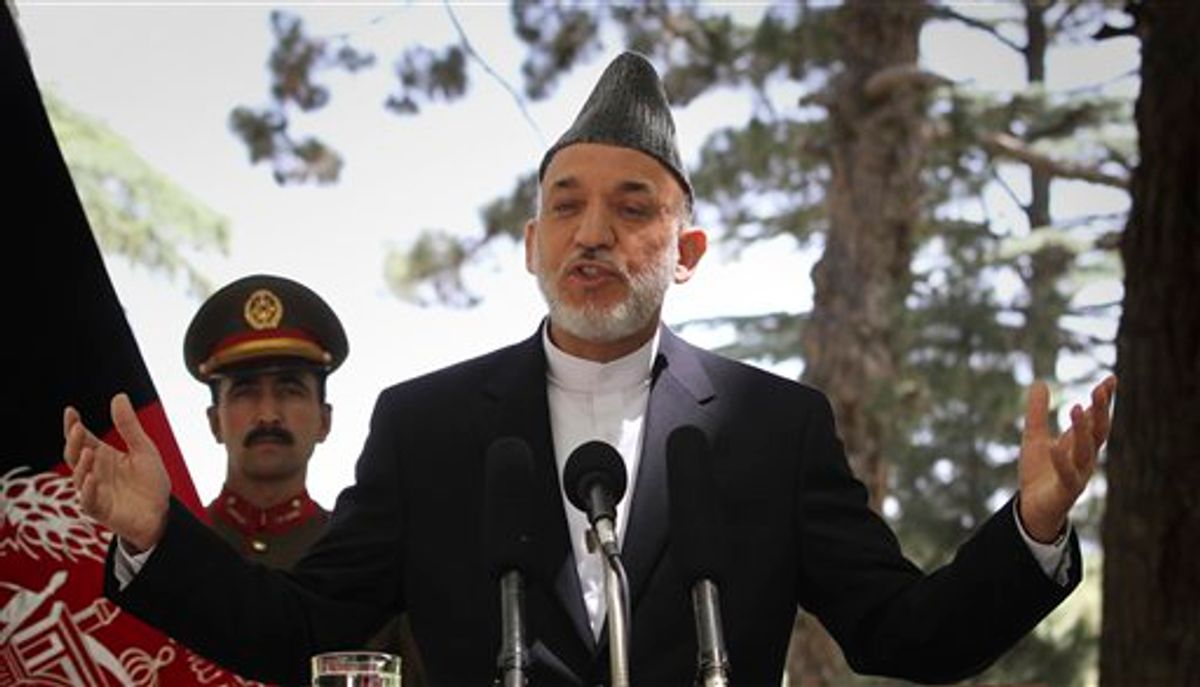 Afghan President Hamid Karzai gestures during a press conference at the presidential palace in Kabul, Afghanistan on Tuesday, May 31, 2011. Angered by civilian casualties, Karzai said Tuesday he will no longer allow NATO airstrikes on houses, issuing his strongest statement yet against strikes that the military alliance says are key to its war on Taliban insurgents. (AP Photo/Musadeq Sadeq) (AP)
--

A spate of horrific civilian killings by NATO in Afghanistan has led Afghan President Hamid Karzai to demand that NATO cease all air attacks on homes.  That is likely to be exactly as significant as you think it would be, as The Los Angeles Times makes clear:

"This should be the last attack on people's houses," the president told a news conference in Kabul. "Such attacks will no longer be allowed."

Karzai's call was viewed as mainly symbolic. Western military officials cited existing cooperation with Afghan authorities and pledged to continue consultations, but said privately that presidential authority does not include veto power over specific targeting decisions made in the heat of battle.

So we're in Afghanistan to bring Freedom and Democracy to the Afghan People, but the President of the country has no power whatsoever to tell us to stop bombing Afghan homes.  His decrees are simply requests, merely "symbolic." Karzai, of course, is speaking not only for himself, but even more so for (and under pressure from) the Afghan People: the ones we're there to liberate, but who -- due to their strange, primitive, inscrutable culture and religion -- are bizarrely angry about being continuously liberated from their lives: "Karzai's statements . . . underscored widespread anger among Afghans over the deaths of noncombatants at the hands of foreign forces."

Indeed, the Afghan People -- on whose behalf we are fighting so valiantly -- are total ingrates and simply do not appreciate all that we're doing for them.  A poll of Afghan men released earlier this month by the International Council on Security and Development found overwhelming opposition to NATO operations in their country.  First there was this in Southern Afghanistan, where most of the fighting has taken place and where we are liberating residents from Taliban tyranny:

Then there's this from Northern Afghanistan, long said to be the region most sympathetic to NATO's fighting:

The Taliban is widely unpopular among Afghans (though in the South, a majority oppose military operations against them); but whatever else is true, 8 out of 10 men, spread throughout all regions of that country, believe that NATO operations are bad for the Afghan people.

So the decisions of the Afghan President are totally irrelevant (when it conflicts with what we want).  The views of the Afghan People are equally irrelevant.  But we're there to bring them Freedom and Democracy (while we decree their elected leaders' decisions "merely mainly symbolic") and are fighting for their own good (even though virtually none of them recognize that).  What a great war, now America's longest and close to a decade old.