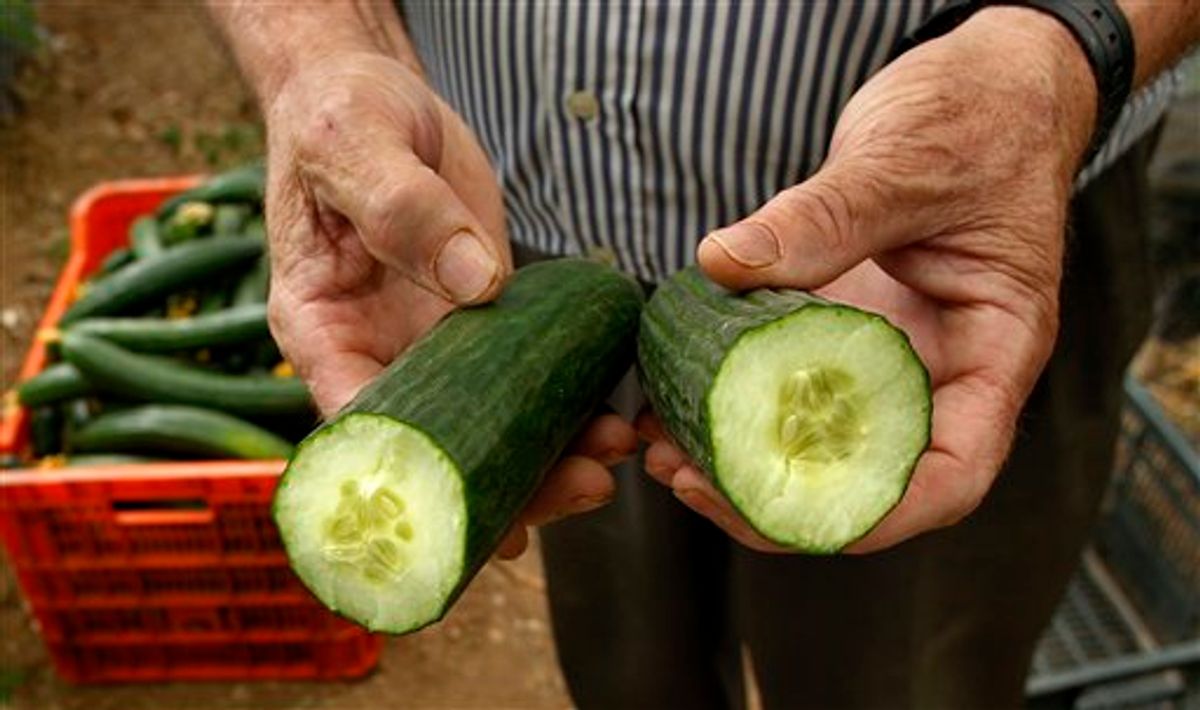 A farm worker shows a cucumber cut in half in a greenhouse in Algarrobo, near Malaga, southern Spain, on Tuesday, May 31, 2011. Angry Spanish farmers whose produce has been cited as a possible source of the deadly bacterial infection in Europe are watching in despair as machines grind their suddenly unwanted fruit and vegetables into compost and are particularly livid with Germany. Spanish agriculture associations accuse German officials of being trigger-happy in singling out two Spanish farm produce companies as sources of cucumbers tainted with E. coli before ascertaining if the vegetables were contaminated before leaving Spain or along the transport chain or while being handled in Germany itself. (AP Photo/Sergio Torres) (AP)
--

A massive and unprecedented outbreak of bacterial infections linked to contaminated vegetables claimed two more lives in Europe on Tuesday, driving the death toll to 16. The number of sick rose to more than 1,150 people in at least eight nations.

Nearly 400 people in Germany were battling a severe and potentially fatal version of the infection that attacks the kidneys. A U.S. expert said doctors had never seen so many cases of the condition, hemolytic uremic syndrome, tied to a foodborne illness outbreak before.

Investigators across Europe were frantically trying to determine how many vegetables were contaminated with enterohaemorrhagic E.coli -- an unusual, toxic strain of the common E. coli bacterium -- and where in the long journey from farm to grocery store the contamination occurred.

The highly politicized mystery over the source of the E. coli contamination deepened in the light of new evidence that two strains of the bacterium may be involved. German officials said they were still looking at Spanish produce but Spain said the discovery was proof its farms were not the source.

E. coli is found in large quantities in the digestive systems of humans, cows and other mammals. It has been responsible for a large number of food contamination outbreaks in a wide variety of countries. In most cases, it causes non-lethal stomach ailments.

But enterohaemorrhagic E.coli, or EHEC, causes more severe symptoms, ranging from bloody diarrhea to the rare hemolytic uremic syndrome. In Germany, at least 373 people have come down with the syndrome, or HUS, in which E. coli infection attacks the kidneys, sometimes causing seizures, strokes and comas.

"The idea of an outbreak of over 300 hemolytic uremic syndrome cases is absolutely extraordinary," said Dr. Robert Tauxe, deputy director of foodborne, waterborne and environmental diseases at the U.S. Centers for Disease Control.

"There has not been such an outbreak before that we know of in the history of public health," Tauxe said, adding that the German strain of E. coli has not been seen in the United States.

German officials say that investigations including interviews with patients have shown people were likely infected by eating raw cucumbers, tomatoes or lettuce, and they are warning consumers to avoid those vegetables.

European Union officials say Germany has identified cucumbers from the Spanish regions of Almeria and Malaga as possible sources of contamination. They say a third suspect batch, originating either in the Netherlands or in Denmark and sold in Germany, was also under investigation.

They noted that imported cucumbers could have been contaminated at any point on the long route to retail customers. Denmark said that no traces of EHEC bacteria were found in tests of vegetables conducted there over the weekend. Exports of Dutch cucumber to Germany were halted but authorities said tests of a cucumber grower and a warehouse found no EHEC. bacteria there either.

Authorities in Hamburg said last week that they had detected EHEC on four cucumbers, three of them imported from Spain and the fourth of unclear origin, which were on sale in a market in the city.

On Tuesday, however, officials said they had found a slightly different type of EHEC on the cucumbers than the type detected in the feces of sick people in Germany, though reiterated that even though that meant those vegetables did not cause the outbreak, they still posed a health risk.

Spain's agriculture minister, Rosa Aguilar, seized on it as evidence that "our cucumbers are not responsible for the situation."

Spain exports most of its produce to other countries in Europe.

The vast majority of EHEC infections have affected either Germans or people who recently traveled to Germany. Germany's top health said 796 people in the country have been hit by less serious infection with the EHEC bacteria. The northern city of Hamburg and surrounding areas have been worst affected.

Other cases have been reported in Denmark, France, the Czech Republic, the U.K., the Netherlands and Switzerland but the World Health Organization said it only had confirmation of the German cases and another six cases in France.

There is frequently a lag between reports of disease outbreaks by national authorities and confirmation by the WHO.

German regional officials have said they are seeing a sharp drop in the number of new cases.

Officials in the northwestern city of Paderborn said, however, that an 87-year-old who suffered from a variety of ailments including recent EHEC infection had died early Tuesday.

In Sweden, hospital medical chief Jerker Isacson said that the Swedish woman who died had been ill for a few days before she arrived at the hospital on Sunday and died early Tuesday.

"She developed serious complications, among other things on the kidneys," he said.

The Swedish Institute for Communicable Disease Control on Monday said 41 Swedes have been infected with EHEC so far, including 15 with HUS.

Britt Akerlind, spokeswoman at the institute, said it is unclear why so many Swedes had been infected, but said it could be that efficient reporting mechanism in the Nordic country means more cases have been discovered here.

In the meantime, Russia's chief sanitary agency on Monday banned the imports of cucumbers, tomatoes and fresh salad from Spain and Germany pending further notice.

It said that it may even ban the imports of fresh vegetables from all European Union member states due to the lack of information about the source of infection.

Cheng reported from London. Mike Stobbe in Atlanta, Geir Moulson in Berlin and Karl Ritter and Malin Rising in Stockholm contributed to this story.