We dissect a truly amazing new campaign video from Herman Cain, whose support in the GOP race is surging 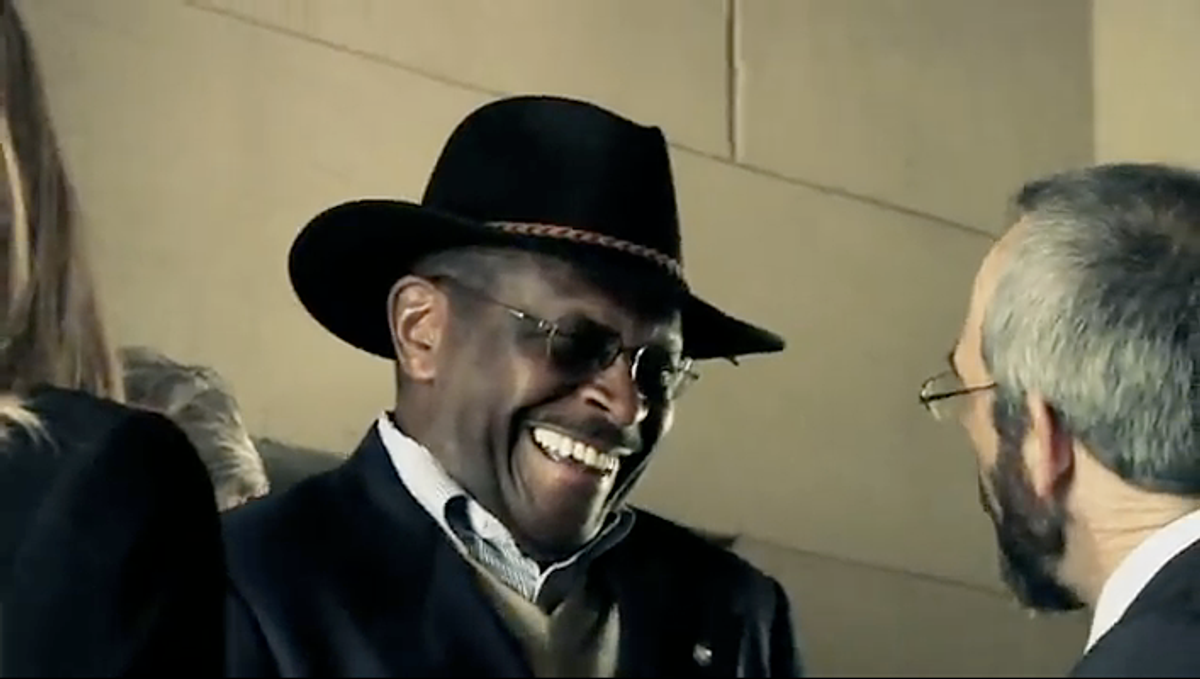 Wow! What a great new video from the Herman Cain campaign.

Let's just go through this beat by beat. Some old farmer guy supports Herman Cain! As does a long-haired Bob Seger-y singer guy! Singer guy has written an awesome song about how Cain is a train and a hurricane. And Hermain Cain was raised the American way, which you should not read anything into. There is also a bit where a train exiting a tunnel is intercut with Herman Cain walking out of a tunnel that Hitchcock would've enjoyed, I suspect.

But the real fun comes at 2:40, when Cain says "he left that Democrat plantation a long time ago." Wow! The Democrats -- the real racists, as we all know -- are keeping their black supporters on a "plantation," apparently. This seems to be saying that black people who vote for Democrats -- 96 percent of black Americans voted for Obama in 2008 -- are essentially slaves or sharecroppers, fooled into supporting their exploiters.

Cain is a surprisingly powerful candidate, despite the fact that he's a silly former pizza chain owner, because he makes white conservatives feel very good about themselves, as Adam Serwer (and others) have pointed out.

White conservatives have developed the belief that being called a racist is a slur on par with actual, proper racial slurs. They also tend to think that amorphous anti-white prejudice is a big problem; it is, in their thinking, perhaps a bigger problem than anti-black prejudice. Many of them also have a very simple, binary understanding of the concept of "racism." You're either a racist -- an epithet-shouting Klan member -- or you're not. This is why, say, Andrew Breitbart says that unless there is video evidence of Tea Partyers explicitly saying "nigger," there is no "proof" that racial resentments have anything to do with right-wing white populism. So Cain is a shield against that charge. How can we be racists when we support a black man for president?

Of course, Cain's also a great candidate if you believe that Barack Obama fooled liberals into voting for him by appealing to white guilt. If you believe that black voters supported Obama because he's black and white liberals supported him because they wanted to vote for a black guy, then you might think Herman Cain would beat Obama by being more "authentically" black. ("My great-great grandfathers were slaves," Cain wants you to know.)

But let's be fair to Cain -- some of his appeal comes from the fact that he's a much, much more inspiring and charismatic candidate than Tim Pawlenty or Mitt Romney. But unlike those uninspiring guys, Cain has never won any sort of election.