Tales of a recovering blabbermouth

I've always been the person who talks too much. What I didn't realize was how much I was drowning out 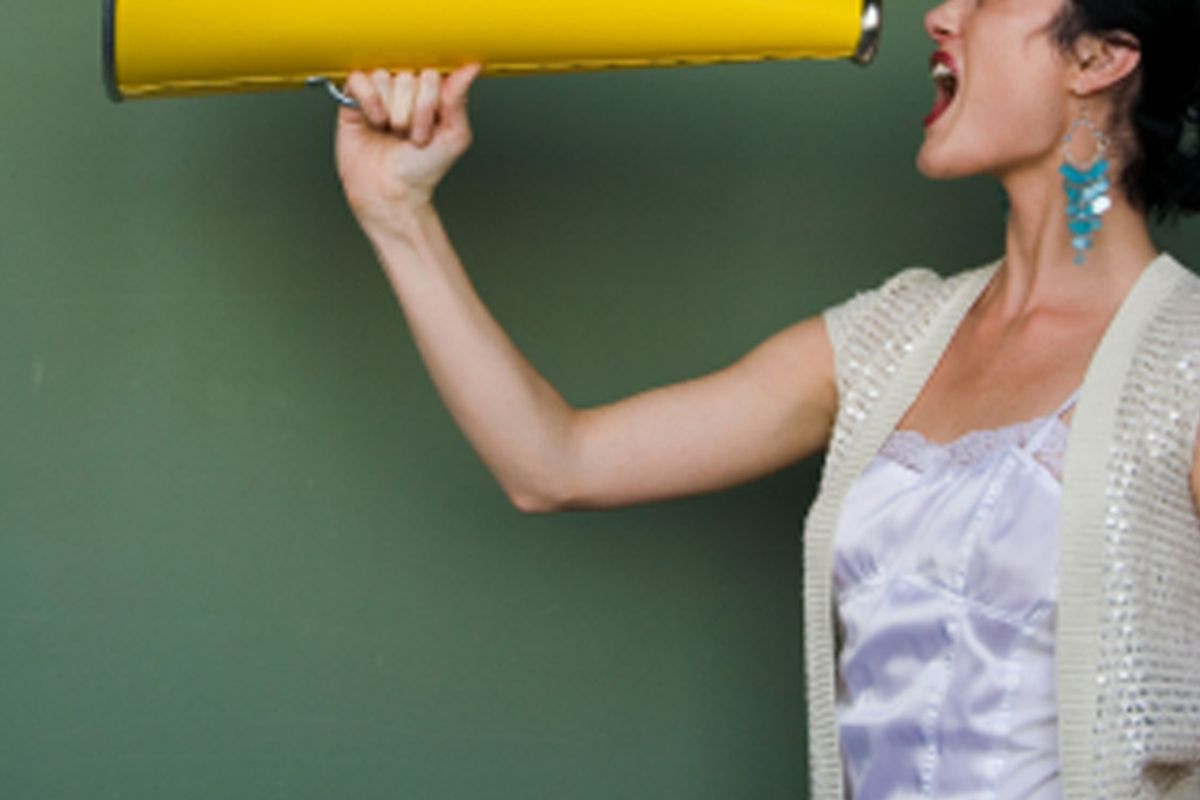 I was 6 when I first began to worry that a person's death came not at a certain age, but when you used up the words allotted to you. This thought filled me with panic, but it did nothing to deter me from a life of verbosity.

I have always known I talk too much, because people have always told me. They say, "You talk too much." When they're not feeling kind, they also say things like, "Don't you ever shut up?" A boyfriend once looked over at me during a party, and just when I thought he was going to tell me he loved me, he said, "Can you just shut your mouth? Even for a minute?" We're not together anymore.

I have sensed, as I've gotten older, that my loquaciousness isn't always interpreted as bubbly or enthusiastic, as it was when I was younger. I have sensed that it has become toxic, and certainly annoying. In college, when my roommate and a few friends returned from dinner out, I asked how the evening went. My roommate said, "You wouldn't have liked it. It was really laid back and nice." She wasn't being mean when she said that. I think she didn't think of me, maybe rightfully so, as someone who could enjoy a relaxed evening.

My husband's main complaint about me is that I won't let him finish a sentence. I say it's my excitement for the conversation, my interest in discourse. He says he just wants to get a word in. But this isn't a story about marriage, or about my college roommate. This is a story about mortifying disclosures, and so I will tell you about rock bottom.

Each winter, I travel from Los Angeles to New York to meet with editors I write for during the year. Some are lingering lunches, where the editor and I find we have a lot in common or a great deal we want to work on together; some are quick "put a face to the name, no, I don't love that idea but send me others" coffees. And sometimes, you meet an editor you really like, and who seems to like you back, but you only have time for a quick sip before that editor must return to her deadlines.

I knew my meeting with Sarah, my Salon editor, was going to be an example of the last kind of meeting. The Salon staff is lean, and the output, as you know, is copious. So when my editor gave me a coffee shop to meet at, I was 15 minutes early, found a table, and checked my email while I waited.

When she walked through the door five minutes late, looking a little harried, I waited for her to spot me. The minute she did, a big smile spread across her face. She was older than I thought she would be, and dressed a little on the uptight side, but that just goes to show how weird email-only relationships are. We get along well, this editor and I do. And so I stood up, and -- what the hell, right? -- I gave her a big hug. She hugged me back.

She sat down and apologized for being late. I told her it was no big deal and, to put her at ease, I told her of a horrifying time I'd shown up late for something. Then, I started talking ideas. I had an idea about Ikea, how it's come to represent the interchangeability of our society -- after all, isn't it weird that we're all buying disposable furniture now? As I told her an anecdote about meeting a friend at Ikea recently, she just let me talk and talk. She must really like me, I thought. Five whole minutes must have passed. Finally, I leaned in, put my hands on her hands -- yes, we're that close! -- and I told her the punchline of the story: "And Sarah, I'd been waiting at the Ikea in Burbank, but the entire time, she was at the one in Carson!"

Her brow furrowed and she blinked. Uh-oh. Was I not supposed to talk about Ikea?

My heart sank. My face flushed red. What the hell had I done?

Now, I don't look like a Jin Wong, but Jeannette, who probably knew that, hadn't had a chance to let me know that I probably wasn't who she was looking for. I apologized profusely. The Asian woman at the next table, who kept glancing at her watch and then at the door, was grateful to finally meet her expected companion.

Five minutes later, a harried woman burst through the door. She looked around. "Taffy?" she asked.

I would like to tell you I immediately learned the lesson about talking too much. But I didn't. Instead, I told Sarah all about the last five minutes, even interrupting Jeannette and Jin's now cozy meeting to introduce everyone, as if they cared. Sarah and I went on to have a meeting -- we got along the way I thought we would, the way Jeannette and I didn't seem like we were going to. All was saved.

But I couldn't escape the implications of what had happened. I had talked so much that I didn't realize who I was talking to. I didn't note that she wasn't interested, or that she was possibly confused by what I was saying. I was speaking for an audience; I was concocting the next thing I'd say. But here's what I wasn't doing: listening.

Since my meeting with Sarah, I've been uneasy. What am I missing when I won't shut up? Why won't I shut up? Sure, I'm avoiding uncomfortable silence. But the things I say aren't just to defend against vast voids of silence. They're to communicate. I'm addicted to communication. My entire life, I have been dedicated to somehow getting my point across to the people I care about, to make them understand what I mean.

I suspect it started when I was very young, and I took quite to heart the PSA-broadcast idea that bottling up feelings would make you sick. As a teenager, I'd watch "My So-Called Life" and "thirtysomething" and shout in frustration at the TV because people weren't saying what they meant; they'd speak in innuendo. It always ended in misunderstanding and a stunted realization of desire. Life is too short, I'd shout. Say what you mean!

I considered it a great gift to those I'm close with that I did this. But maybe, along the way, I stopped understanding what was important to say, and what could be gained just by thinking before speaking. Somehow, I didn't realize that in my attempt to make sure my friends and family knew me, really knew me, that not everything I thought or realized was important.

Listening is the new gift I give to people I know. And it's been rewarding in more ways than you'd think. For so long, I've only written personal essays, but lately, I've been writing more reported stories about interesting things that have nothing to do with me. Because here's the thing: When you talk only about yourself, you never learn anything new.

And so I've been learning a lot lately. Not just from the people who insert things in between the long monologues I give. But from everyone. I've realized some people need a moment to formulate what they want to say. For so long, I took that silence as my cue to jump in. But that's not always the best use of quiet. Instead, I'm starting to understand the people around me better. I am late to learn that that is just as important as making sure they understand me.

Oh, and Ikea? I did look into that story, and I still think a piece on people buying disposable furniture is a good one. (What do you think, Sarah?)

Taffy Brodesser-Akner is a freelance writer living in Los Angeles. She will not be posting the link to this particular essay onto her Facebook page.