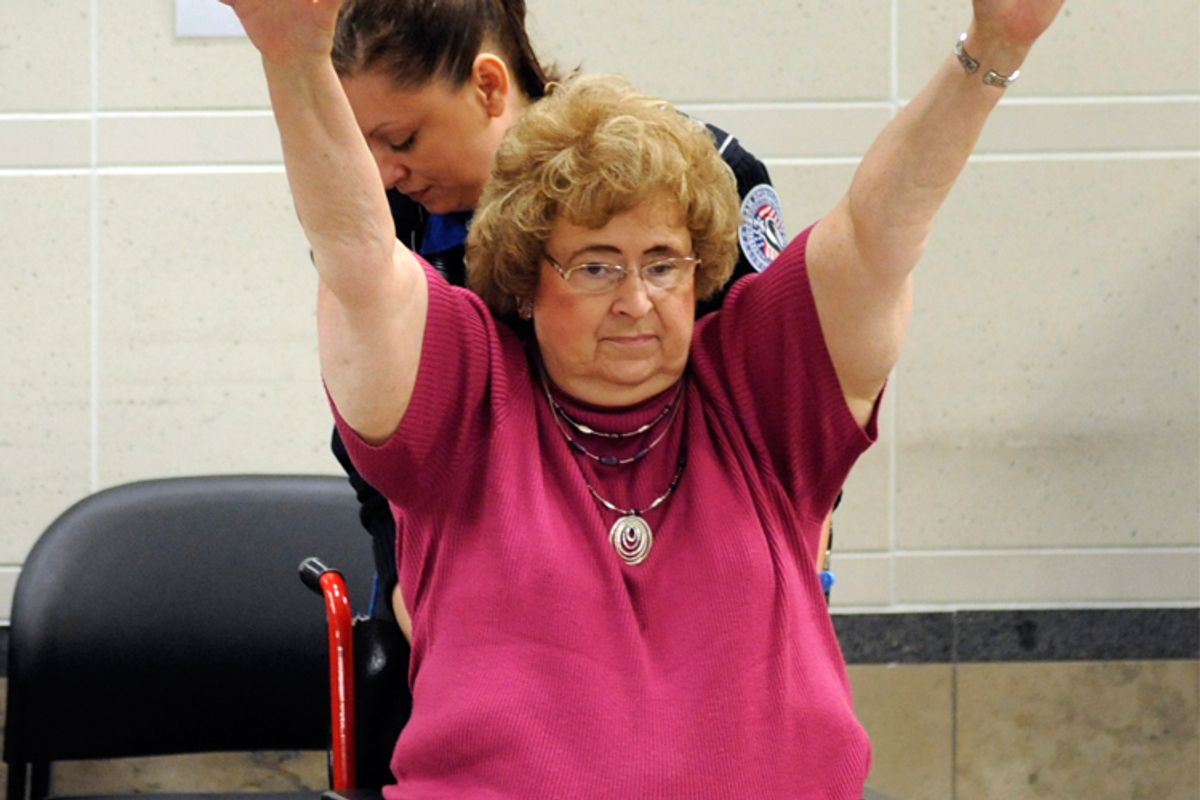 A TSA officer searches a traveler in a wheelchair at the Minneapolis-St. Paul International Airport.
--

Far too often, debates about privacy and security begin with privacy proponents pointing to invasive government surveillance, such as GPS tracking, the National Security Agency surveillance program, data mining, and public video camera systems. Security proponents then chime in with a cadre of arguments about how these security measures are essential to law enforcement and national security. When the balancing is done, the security side often wins, and security measures go forward with little to no privacy protections.

But the victory for security is one often achieved unfairly. The debate is being skewed by several flawed pro-security arguments. These arguments improperly tip the scales to the security side of the balance. Let’s analyze some of these arguments, the reasons they are flawed, and the pernicious effects they have.

The All-or-Nothing Fallacy
Many people contend that "we must give up some of our privacy in order to be more secure." In polls, people are asked whether the government should conduct surveillance if it will help in catching terrorists. Many people readily say yes.

We shouldn’t be balancing the costs of completely forgoing surveillance against privacy. Instead, the security interest should only be the extent to which oversight and justification will make surveillance less effective. In many cases, privacy protection will not diminish the effectiveness of government security measures all that much. Privacy is losing out in the balance because it is being weighed against completely banning a security measure rather than being balanced against merely making it a little less convenient for the government.

The Deference Argument
Many security proponents argue that courts should defer to the executive branch when it comes to evaluating security measures. In cases where Fourth Amendment rights are pitted against government searches and surveillance, courts often refuse to second-guess the judgment of the government officials. The problem with doing this is that, unless the effectiveness of the security measures is explored, they will win out every time. All the government has to do is mention "terrorism," and whatever it proposes to do in response -- whether wise or not -- remains unquestioned.

But it is the job of the courts to balance privacy against security, and they can’t do this job if they refuse to evaluate whether the security measure is really worth the tradeoff. Deference is an abdication of the court’s role in ensuring that the government respects constitutional rights. The deference argument is one that impedes any effective balancing of interests.

The Pendulum Argument
In times of crisis, many security proponents claim that we must swing the pendulum toward greater security. "Don’t be alarmed," they say. "In peacetime, the pendulum will swing back to privacy and liberty."

The problem with this argument is that it has things exactly backward. During times of crisis, the temptation to make unnecessary sacrifices of privacy and liberty in the name of security is exceedingly high. History has shown that many curtailments of rights were in vain, such as the Japanese-American internment during World War II and the McCarthy-era hysteria about communists. During times of peace, the need to protect privacy is not as strong because we’re less likely to make such needless sacrifices. The greatest need for safeguarding liberty comes during times when we are least inclined to protect it.

The War-Powers Argument
After Sept. 11, the Bush administration authorized the National Security Agency to engage in warrantless wiretapping of the phone calls of Americans. Headquartered in Maryland, the NSA is the world’s largest top-secret spy organization. The NSA surveillance program violated the Foreign Intelligence Surveillance Act (FISA), a federal law that required courts to authorize the kind of wiretapping the NSA engaged in. The Bush administration didn’t justify its actions on an argument that it was acting legally under FISA. Instead, it argued that the president had the right to break the law because of the "inherent constitutional authority" of the president to wage war.

The war-powers argument is so broad that it fails of its own weight. If the president's power to wage war encompasses breaking any law that stands in the way, then the president has virtually unlimited power. A hallmark feature of our legal system is the rule of law. We repudiated a monarchy in the American Revolution, and we established a nation where laws would rule, not a lone dictator. The problem with the war-powers argument is that it eviscerates the rule of law. The most unfortunate thing is that Congress responded with a mere grumble, nothing with teeth -- and not even teeth were bared. The message is now clear -- in times of crisis, the rule of law can be ignored with impunity. That’s a terrifying precedent.

To see the problems with the Luddite argument, let’s look at biometrics. Biometric identification allows people to be identified by their physical characteristics -- fingerprint, eye pattern, voice and so on. The technology has a lot of promise, but there is a problem, one I call the "Titanic phenomenon." The Titanic was thought to be unsinkable, so it lacked adequate lifeboats. If biometric data ever got lost, we could be in a Titanic-like situation -- people’s permanent physical characteristics could be in the hands of criminals, and people could never reclaim their identities. Biometric identification depends on information about people’s characteristics being stored in a database. And we hear case after case of businesses and government agencies that suffer data security breaches.

One virtue of our current clunky system of identification is that if data gets leaked, a person can clean up the mess. If your Social Security number is seized by an identity thief, you can get a new one. For sure, it’s a hassle, but you can restore your identity. But what happens if your eye pattern gets into the hands of an identity thief? You can’t get new eyes. Given the government’s existing track record for data security, I’m not sure I’m ready to risk the government having such critical information about me that could cause such lasting and unfixable harm if lost. This isn’t Luddism -- it’s caution. It is heeding the lessons of the Titanic. Security proponents just focus on the benefits of these technologies, but we also must think about what happens if they fail. This doesn’t mean not adopting the technologies, but it means we should be cautious.

These are just a few of the flawed arguments that have shaped the privacy/security debate. There are many others, such as the argument made by people who say they have "nothing to hide." We can’t have a meaningful balance between privacy and security unless we improve the way we debate the issue. We must confront and weed out the flawed arguments that have been improperly skewing the conversation.

Daniel J. Solove is the John Marshall Harlan Research Professor of Law at the George Washington University Law School and the author of the new book, "

Nothing to Hide: The False Tradeoff Between Privacy and Security

," where he discusses these and many other faulty arguments in the privacy-security debate