Accusing the New York Democrat of impropriety without compelling evidence seems fair, if you totally hate him 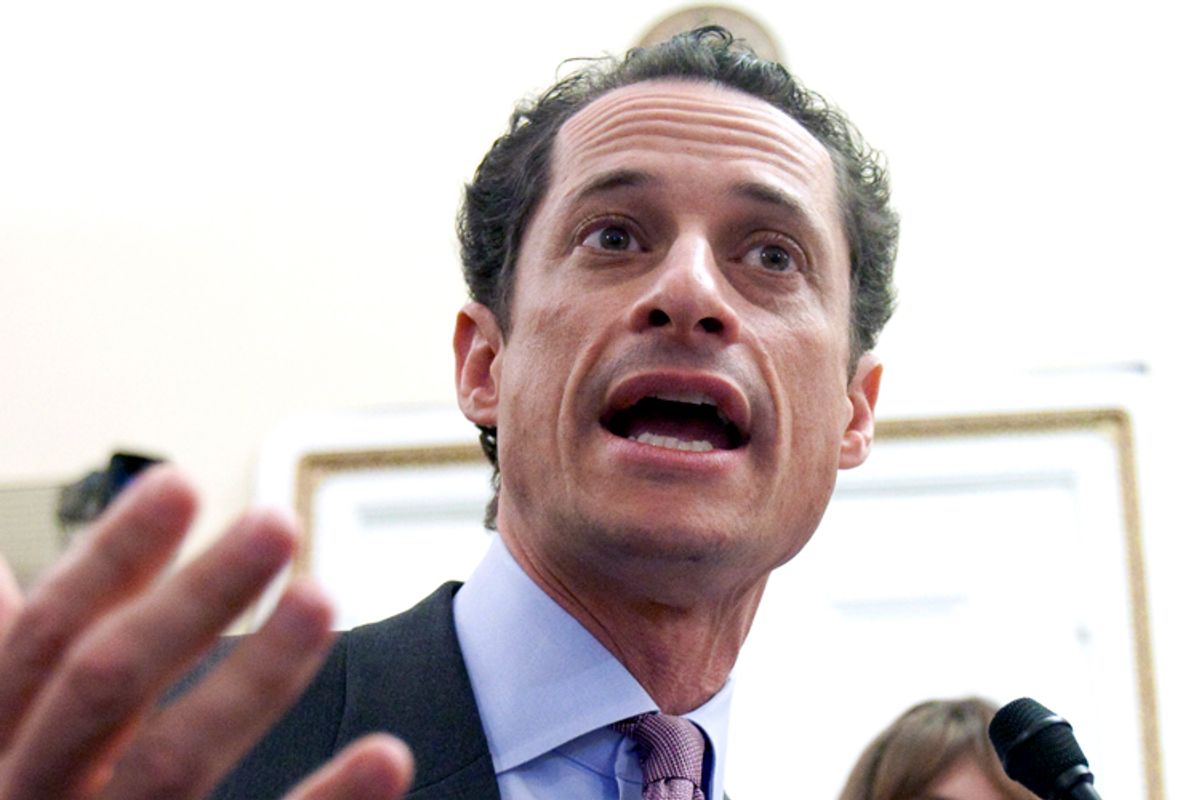 It is certainly possible that Representative Anthony Weiner sexted a young woman who lives in Washington state. My own theory, based primarily on the fact that the only person who seemed to notice the Tweet supposedly sent by Weiner was a creepy right-winger who is obsessed with the New York Democrat, is that one or more of the congressman's social networking profiles were phished or otherwise compromised, as he says. But I could be wrong! (I'm also inclined to believe that if Weiner were sending inappropriate photos to young women, he'd send them directly and not via a public photo-sharing site. But politicians do dumb things!)

What I do know for sure: You can't trust anything Andrew Breitbart says or anything his websites claim until it's been independently verified by someone not affiliated with the right-wing media. The (universally male) right-bloggers who've been harassing the poor woman involved in this story (see here and here, if you have the stomach for gross, mouth-breathing sexism from a gang of inappropriately titillated creeps) are disgusting. And the more "respectable" conservative pundits and bloggers jumping on this story are transparently praying so hard that this kills Weiner's political career that they're embarrassing themselves.

Jonah Goldberg, for example, cannot get enough of "Weinergate," and I imagine him giggling every time he types that non-word.

He was the first to mention the story on the Corner this weekend, complete with a presumption of guilt that he did not bother to back up with any sort of argument or evidence. Having already interrupted his somber remembrance of America's fighting men and women in order to make the most obvious joke possible, twice, about this scandal and the congressman's last name, Goldberg wrote a longer post this morning practically salivating at the thought that "this will not end well for Congressman Weiner."

At first his office said his Twitter account was “hacked.” Now he says it was all a “prank.” This is an important change in language because to claim his account was hacked is to claim he was a victim of a crime. Meanwhile a prank is something he can wave away.

Another Very Good Point -- the one that shows what this is actually all about -- is that Democrats would be all over this if it had happened to a Republican, and his proof is that the MSM was all over this when a Republican was actually convincingly proven to have done something like this:

I don’t think this is a colossal scandal, but the selective standards of the MSM drive me crazy. Recall that the NY-26 race we’ve just finished analyzing was a result of the fact that a sitting congressman had to resign because he sent a picture of himself without shirt to a woman on Craigslist. In 2006, Nancy Pelosi used Mark Foley’s scandal to help win back the Congress.

This makes sense only if you believe that it's "fair" for Republicans to invent their own "Democrat sex scandal" as "payback" for Democrats capitalizing on what Chris Lee did to himself. Yes, Democrats jump all over it -- or "sensationalize" it -- when a Republican does something weird and scandalous. But... Chris Lee's picture had his face in it, and the recipient of the picture confirmed the story. If you can't understand why the MSM would treat these stories differently (hint: not "liberal bias"!) you are maybe guilty of substituting wishful thinking for analysis. (Also, Jonah, a Mr. Eric Massa would maybe like a word with you about how the MSM treats congressional Democrats accused of odd sexual behavior!)

Later, Jonah claims that Weiner issued a non-denial denial, linking to a CNN video of Weiner taking questions on this scandal from a gaggle of reporters, which suggests that maybe the MSM isn't ignoring this story after all. (I'm also not sure if one is allowed to issue a non-denial denial after repeatedly issuing traditional denials, especially if that so-called non-denial denial takes the form of referring people back to your initial denials, repeatedly.)

Even the right-wingers actually paying attention to the facts of this story are saying things that seem bizarre to me. It is now taken for granted, for example, that Weiner is acting like a man who is guilty of something, because... he said he was hiring a lawyer. As Nathan Goulding writes, in his list of possible explanations for all this:

He was actually hacked. If this is the case, it opens up more questions than it answers. (Why has no one taken credit for it? Why hasn’t Weiner pledged to hunt down this guy, seeing as this story isn’t going away?)

Maybe no one has taken credit for it because the point was to make people think Weiner took and sent the photo. And doesn't "hiring a lawyer" count as working to "hunt down this guy"?

Anthony Weiner could be trying to make this all go away because he did something wrong. But it also seems possible that he wants it all to go away because it's a stupid, false story.

If you hate Weiner and hope very much that he'll depart public life in a humiliating fashion, I can see why you would be very excited about this. But it's way, way too thin right now to be as worked up as Goldberg and friends.