For seven long minutes, he takes questions about the lewd photo sent from his Twitter account -- but answers none 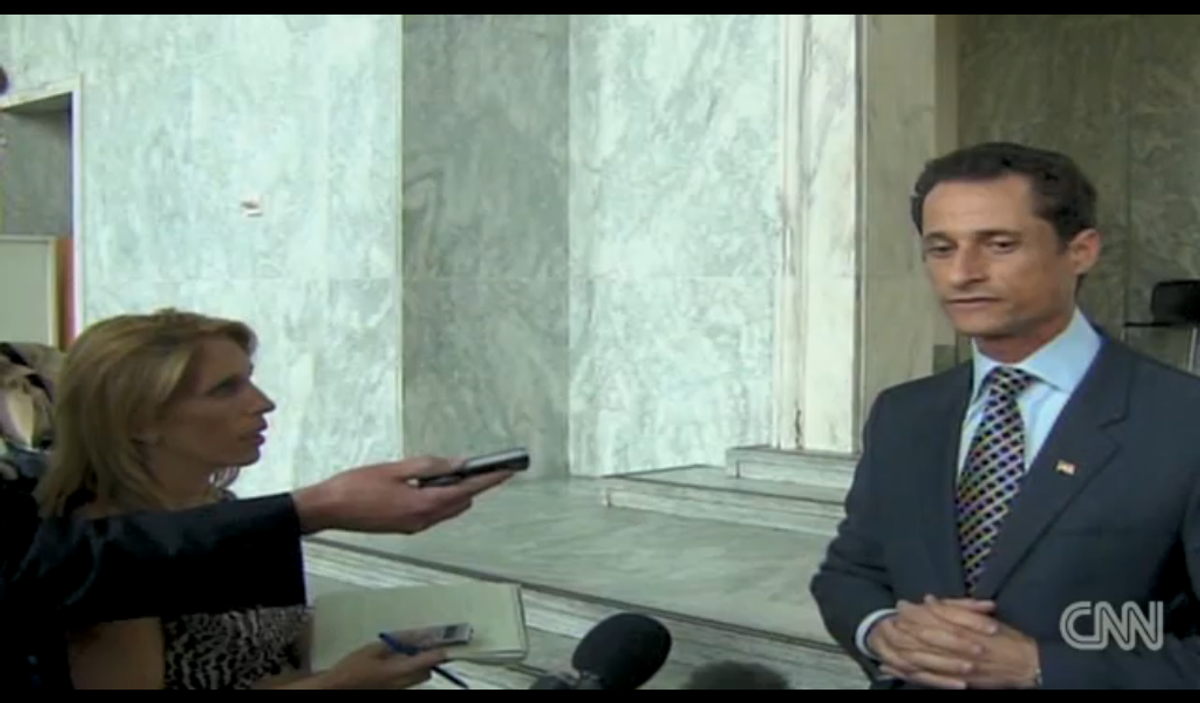 Anthony Weiner has a richly-earned reputation as one of the most press savvy legislators on Capitol Hill, a smart, cocky, quick-witted quote machine who has become a favorite of television producers and built a sizable national following in the last few years.

The best that can be said, then, about the seven minutes he spent in front of reporters and television cameras late Tuesday afternoon is that his performance was totally and completely out of character.

Over and over, reporters asked him a basic, direct question: Did he send a lewd photograph to a female college student from his Twitter account or not? But Weiner -- the same man who became a national celebrity last year with a House floor rant against Republicans who refused to state clearly and simply whether they were for or against a bill -- steadfastly refused to provide an answer. Nor would he answer questions about why he hasn't asked police to investigate what he previously alleged was a hacking of his Twitter account or why he would be following a 20-year-old college student on Twitter.

For instance, here was his exchange with CNN's Dana Bash and another reporter at the start of the press conference:

Weiner: This was a prank that I’ve now been talking about for a couple of days. I’m not going to allow it to decide what I talk about for the next week or the next two weeks, and so I’m not going to be giving anything more about that today. I think I’ve been pretty responsive to you in the past.

Bash: You're here, which we appreciate. But you're not answering the questions. Can you just say why you haven’t asked law enforcement to investigate what you have said is a crime?

Weiner: If I was giving a speech to 45,000 people and someone in the back of the room threw a pie or yelled out an insult, would I spend the next two hours responding to that? No. I would get back..

Male reporter: You sent from your Twitter account -- a lewd photograph sent to a college student. Answer the question: Was it from you or not?

Weiner: Permit...do you guys want me to finish my answer?

Male reporter: Yes, this question: Did you send it or not?

Weiner: If I were giving a speech to 45,000 people and someone in the back of the room threw a pie or yelled out an insult, I would not spend the next two hours of my speech responding to that pie or that insult. I would return to what I want to talk about to the audience that I want to talk to...

Male reporter: All you have to do is say no to the question

Weiner: ...and that is what I intend to do this week.

Male reporter: All you have to do is say no to the question.

This evasiveness was notable, as was the lack of Weiner's trademark swagger. It was an uncharacteristically defensive performance that seemed to go on and on, with forced attempts at humor and awkward efforts to change the subject to ... Clarence Thomas. Politico's Maggie Haberman noted on Twitter that a "media savvy" non-Republican friend of hers likened it all to watching a Saw movie.

What, if anything, this all means remains unclear. All we know now is that a lewd image was apparently sent from Weiner's Twitter account over the weekend and that he has said his account was hacked (along with his Facebook page). But if he thought his appearance before the press would put the story to rest, it had the exact opposite effect. CNN played the entire seven-minute in primetime Tuesday night, and each New York network affiliate played the Weiner story prominently at the top of its 11 P.M. newscast. We can only imagine what the Post and the Daily News have in store for him in the morning.