Are video games turning against the U.S. Army? 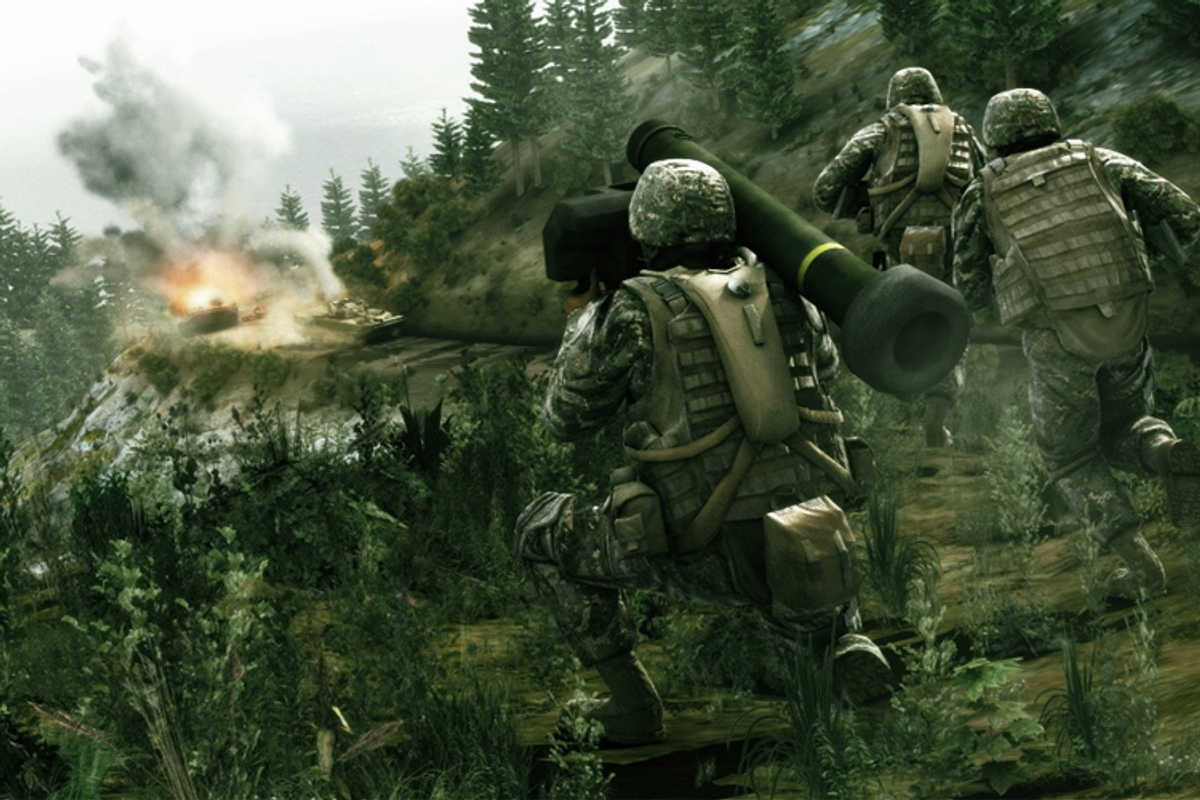 Within the Political-Military-Entertainment Complex (a.k.a. The Complex), there are all sorts of micro-disagreements over which wars to fight, which funding priorities to pursue, and which allies to make common cause with -- but there is an embedded macro-assumption that is rarely ever discussed, much less questioned. It goes something like this: America will always be the Most Powerful Nation On Earth and in matters of war and peace, we are always the Good Guys and our opponents are always Bad Guys. No matter the news -- no matter the evidence of other nations economically outpacing us, no matter the body bags of innocent civilians we pile up -- this storyline persists as the dominant narrative in our media, our politics and our entertainment.

In the past, video game companies joined with other cultural industries to loyally promote these basic assumptions. Even those games that seemed to push the envelope by letting players be the Bad Guy still supported the basic story. As just one example, Modern Warfare 2 allows players to be on the terrorist side of an airport massacre -- but only for purposes of helping the CIA infiltrate and terminate the terrorist group.

But if there was ever going to be a set of products forcing us to at least question that story, it was always going to be video games -- an art form that has lately become an island of samizdat in a sea of establishment-serving propaganda. Two of the industry's newest products exemplify the trend.

The first is called "Homefront," which -- not surprisingly -- comes from John Milius, the director of the 1980s rogue classic, "Red Dawn," and (appropriately!) the real-life inspiration for Walter Sobchack from "The Big Lebowski." Milius' game is not groundbreaking in its graphics or gameplay but in its portrayal of a post-imperial America bereft of power. The depiction is a direct affront the first half of The Complex's assumption -- that America is always The Most Powerful Nation On Earth. No doubt, that renders the game unpatriotic in the eyes of some or at least "disturbing," as the New York Times claims. Why? Because, writes the Times, the game means "the inkling that America might not necessarily be the most important place in the world forever" may be "finally sinking into our national consciousness... no matter what the politicians say."

The other new video game to challenge The Complex is called "Glorious Mission." Developed jointly by a Chinese software company and the Chinese military, the game is "apparently modeled on the U.S. Army-made shooter 'America's Army,'" according to Wired magazine.

"But," writes Wired, "there's one key difference between the American and Chinese 'shooters.' Where the bad guys in 'America's Army' are generic Middle Eastern or Central Asian insurgents and terrorists, the enemy in 'Glorious Mission' is apparently the U.S. military."

Clearly, this is an assault on The Complex's storyline that says the U.S. military must always be The Good Guy. To understand just how taboo that is, consider that "America's Army" -- the inspiration for "Glorious Mission" -- is so intent on painting the U.S. military as The Good Guy that it makes players fighting each other "always perceive [that] they are in the U.S. Army." In other words, in "America's Army" no matter what team you are on, you always see yourself dressed as a U.S. soldier and shooting at evil foreign terrorists -- even though opposing players controlling the "terrorists" you are shooting at see you as the terrorist and themselves as the U.S. soldiers.

That China is using the video game industry to turn that formula around on us should be no surprise. Quite frankly, we should stop mustering faux outrage/shock at this sort of thing, and start getting used to it, because it's here to stay.

As a budget-strapped America tumbles down the same path of decay and diminished global status that other crumbling empires followed, the first part of The Complex's storyline about U.S. supremacy will lose cultural traction because its narrative will cease to reflect the the real world. And as that decline accelerates, more and more ascendant countries will start to make cultural products that portray us in the same way our own cultural products have long portrayed the rest of the world. Think of it as the cultural version of what the CIA calls "blowback."

If there's any silver lining in this disturbing development, it's that we will be exposed to video games, movies, television shows and other media products that show how the world perceives us. Yes, rather than continuing to exist only in a hermetically sealed self-assuring bubble of hyper-exceptionalist agitprop, we will be increasingly confronted with an alternate non-American perspective -- one that forces us to gaze into a fun-house mirror. We can be afraid of the inevitable (and inevitably caricatured) distortions we see -- or we can use the experience as an opportunity to finally start changing the underlying image in the reflection.