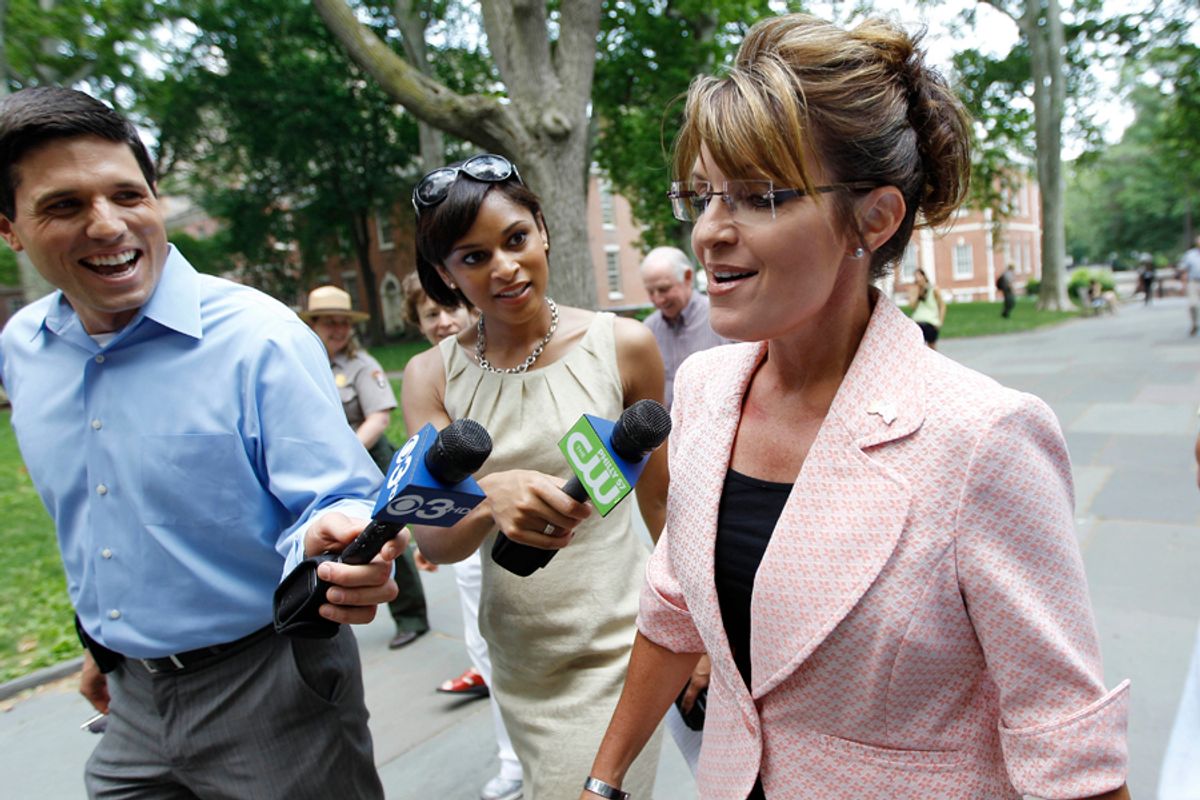 As a journalist, watching the flailing press coverage of Sarah Palin's bus tour has been the most sobering experience since Donald Trump helicoptered into New Hampshire masquerading as a presidential candidate and a horde of reporters hung on his every word.

Most observers acknowledge that Palin's so-called "One Nation" tour doesn't have a coherent point, and even that Palin would be a weak presidential candidate. And yet, literally scores of reporters -- as many as 200 -- are following Palin around as she busily fails to say anything meaningful. Reporters unlucky enough to be assigned to cover Palin on Memorial Day created a #wheressarah Twitter hashtag as they raced around trying to guess where she would land next.

What would in a just world prompt a round of self-reflection by the national press corps will instead continue indefinitely until Palin gets bored. Here's a look at the lowlights of Palin bus tour coverage so far:

[B]y some counts, more than 200 journalists trooped alongside Palin in Philadelphia ...

And from the Times:

The CNN Express bus, filled with producers, camera operators and on-air talent, sat in Gettysburg for hours Monday, not even sure she was coming.

A typical example from ABC:

So, if Palin’s goal is to bypass traditional media, the bigger mystery may be why we keep scrambling to cover her like a traditional candidate. ...

As we noted yesterday, there's evidence that despite her ability to get non-stop, almost obsessive (just check your Twitter feed) attention from the press, she garners only a fraction of that interest from voters in her own party.

What's clear from her bus tour, though, is that if Palin runs for president, she’ll do it one and one way only: hers.

No one enjoys tweaking the politico-media establishment more than the former Alaska governor, who believes she has been scorned and ridiculed by that establishment throughout her political career. In that context, running for president would be the ultimate anti-establishment act by the nation’s most unpredictable politician.

This is a screengrab from the news network's weekend coverage (via TPM). (OK, so the network probably meant to refer to the fact that Palin is visiting various Civil War battlefields and history museums. But the slip is too delicious to leave out.)

Finally, keep in mind that Palin has openly stated that she is messing with reporters. "I want them to have to do a little bit of work on a tour like this," she told Fox's Greta van Sustern. "And that would include not necessarily telling them beforehand where every stop is going to be."

Palin, who holds an undergraduate degree in journalism, added: "The media can figure out where we're going if they do their investigative work, or they're going to keep kind of, as you put it, going crazy trying to figure out what we're doing here."

Here's the video of that interview, in which Palin also cryptically air-quotes the word "politician":

What should the press do about this? Don't ignore her, argues David Kurtz; instead calmly and objectively call out her ridiculousness.