Is racism on the way out?

Ellis Cose believes it's fading as a phenomenon. We talk with him about his new book, "The End of Anger" 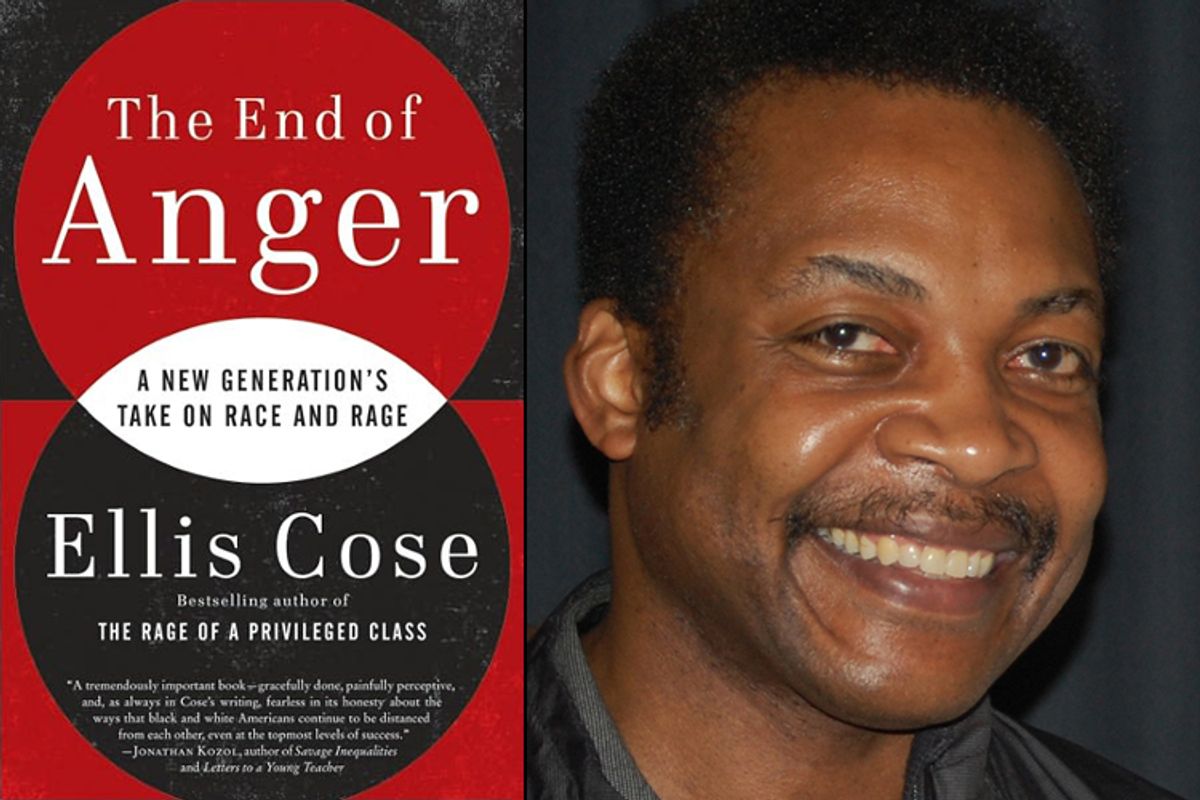 When veteran journalist Ellis Cose wrote "The Rage of a Privileged Class" in 1993, his editor was so shocked by his thesis -- that black middle-class professionals were deeply frustrated by enduring discrimination in the workplace and remained unable to achieve the same level of success as their white colleagues -- that he pulled him aside to ask if it was really true. Published just a year after the L.A. riots, that book struck a responsive chord with the black community and was received to wide acclaim.

Now, nearly two decades later, Cose is revisiting the black middle class in his new book, "The End of Anger," and finds that much has changed. He describes an emerging generation of optimistic young black professionals, but notes that their attitudes are complicated by white anger, racism and divisions within the black community. We spoke with him last week.

How has the black community changed since you wrote "The Rage of a Privileged Class"?

There is a hugely different sense of hope and optimism now; I think that's the biggest change that you see from back then ... Not too long after "Rage" came out, we started to have these sort of unprecedented breakthroughs. We got people like Dick Parsons, who was head of Time Warner. You got people like Franklin Raines, who -- even though he had a fall from grace -- was head of Fannie Mae. All of a sudden, what had seemed impossible became plausible. And of course, it was all topped off with the election of Obama. Which was sort of the defining moment of the end of an era, if you will.

Two things have changed. One, there has been enough time for a new generation to come online. And two, there've just been general changes in society. So you have those two phenomena interacting with one another. You have a set of younger people who just didn't go through what that older set of folks went through.

What struck me is just the very different take they had. Not on whether discrimination existed. They all agree that life is different for an African-American than it is for a white American. But what is different is the significance of that discrimination in terms of their life possibilities. The younger folks are just much more likely to believe that they can personally overcome it because there are ways to get around it that their parents didn't have, and that their grandparents could not even imagine.

In your research for "End of Anger," you conducted surveys among black Harvard Business School alumni, and graduates of the educational program A Better Chance. You write that the majority of these professionals earn at least $100,000 a year -- but that the average black household in the U.S. earns $35,000. Why did you choose to focus on a group of people who aren't statistically representative of the average black experience?

Recent studies have described a growing division in the black community along class lines -- Eugene Robinson's book "Disintegration" comes to mind. Is that something you've noticed too?

I think that it's inevitable. We should remember, though, that the idea of a united black community that shared perceptions across the board has always been a bit of a falsehood, but it's also been driven by the fact that blacks were all in the same boat. No one was going to make it out of the ghetto, so you had a forced unity, and a forced commonality of viewpoints. Now you have one set of folks, who, because they were fortunate enough to get very good credentials, can aspire to anything a white guy can aspire to. So it's inevitable that our outlook on the world's a little different than that of somebody who's still stuck in the poor, very segregated black community.

But one of the interesting things is that even among that most privileged group, they're not saying that race no longer matters. Even the most privileged folk are aware that they are subject to being treated quite differently on the basis of race. If there's anything close to a universal experience among African-Americans, it's being treated with suspicion in a store, or being approached by a cop for no good reason -- they all shared this. I don't think that there is going to be a loss of a coherent black identity, but I do think it's gotten a lot more complicated, because people perceive their options in wildly different ways than they did before.

How do you reconcile this increased optimism in the black community with the intense expressions of resentment that Barack Obama's presidency has brought out from many white voters?

I think it's part and parcel of the same thing. Because there has been this very obvious progress, there is a very boisterous minority that is upset about it, and of course they're going to make their voices heard. I mean clearly, as all the research data shows, the hardcore sort of Tea Partyers tend to be older. They tend to be conservative. They're not very comfortable with where this country's going now. Who would expect them to be? It's not because they're stupid. It's because they're stuck in a very old paradigm.

But while Obama very much identifies as black, I also get the sense that the American public takes quite a bit of solace in the fact that he has a white mom.

Right, and he obviously plays that up. He put her front and center in his campaign. I mean, when I interviewed him before he announced [his candidacy], he realizes people see different things in him, and he thinks that's fine.

He's managed to make it so that no matter what someone projects onto him, he can both accommodate it and refute it at the same time.

Exactly. And he's also a very rational man. He knows that he's an African-American, so there's no point in pretending that he perceives himself in some other way. He acknowledges that.

Do you think Obama could've been elected if he'd more clearly identified with the black community, or been descended from a long line of black Americans?

To the extent he identifies as black, the white community gets nervous. I think it's just that simple, and he realizes this. It's very elementary stuff.

I want to talk to you about the last paragraphs of your book. You include a section called "A Harvard MBA Guide to Success" in the appendix, and Rule 10 is: "Never talk about race (or gender) if you can avoid it, other than to declare that race (or gender) does not matter."

I think that many people are uncomfortable with cultures they perceive as different from their own, and that's always going to be the case. I think part of why many white Americans have become a lot more comfortable with blacks is that they've convinced themselves that blacks aren't all that different -- at least certain blacks aren't all that different [laughs]. And so they can get their heads around that. And that, combined with the fact that it's no longer cool to be a racist anymore, sort of drives things in a certain direction.

But I think it takes a more open mind than a lot of people have, than most people have, to ever accept in any serious way a multicultural perspective.

Do you think there will ever be a point where this is something we discuss openly?

I think we will for generations, and maybe forever, be dealing with the impact of racism. But racism as a phenomenon itself is fading. So, yeah, I think we're going to reach a point where we can talk about "the old days" -- you know, same way we can talk about the Confederacy now, and how all these misbegotten Southerners were fighting for slavery.