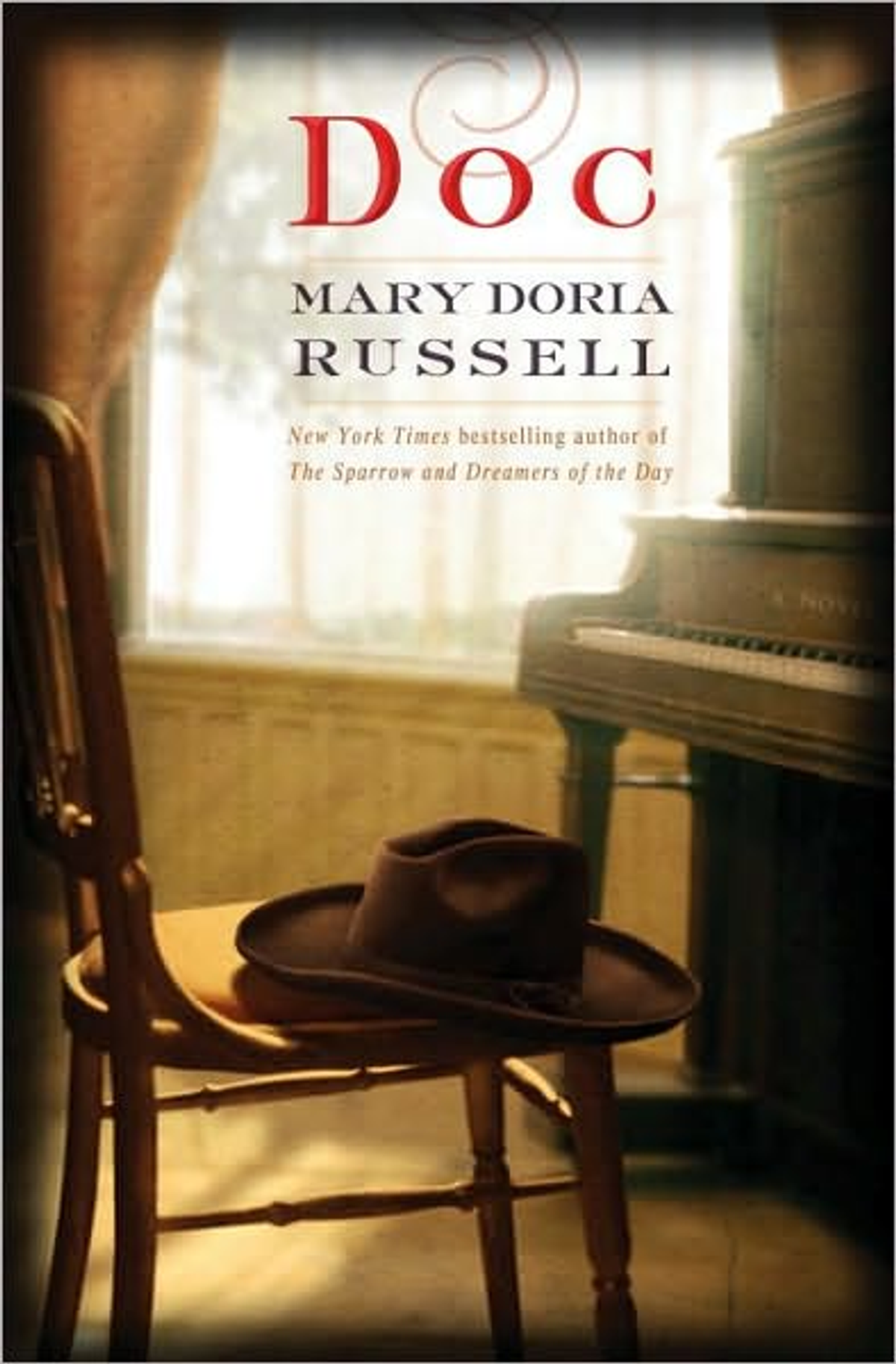 Doc Holliday, Bat Masterson, Wyatt Earp, and Earp's many brothers are known to most of us as they have been shaped successively by sensationalist journalism, dime novels, movies, and TV series. Though biographies of varying degrees of seriousness have also been written of most of these men, their lives might best be suited to fiction; only it can adequately convey the animating tincture of myth that has made them momentous.

This, at least, is the thought that comes to me upon finishing Mary Doria Russell's "Doc." This extraordinary novel, whose central figure is John Henry "Doc" Holliday, is both a work of reclamation of the man from his legend as a coldblooded killer and an inspired evocation of a mythic quintessence. That fundamental aspect of Doc's life is announced from the start: "The Fates pursued him from the day he first drew breath, howling for his delayed demise."

Though set chiefly in 1878 in Dodge City, the story begins with John Henry Holliday's early life as a man beset by misfortune. The son of a Georgia planter, he was born with a cleft palate, later repaired by innovative surgery. His mother, a woman "educated in excess of a lady's requirements," devoted herself to the arduous task of teaching him to speak clearly. She also taught him to play the piano and supplemented his formal education, sharing with him her love of the classics. She died of tuberculosis when he was 15, leaving him in life-long mourning. She quite possibly left Holliday with her disease as well -- the tuberculosis that eventually killed him two decades later.

Holliday trained as a dentist in Philadelphia, returned to Georgia to set up a practice, but soon the dread malady began to show itself. He traveled west to ply his trade in an atmosphere supposed to be more salubrious than Georgia's miasmic swelter. Texas was first, then Dodge City. Here, in this "small, bright hellhole in the immense, inhuman darkness that was west Kansas," we have the heart of the book and the entrance of a familiar set of characters. Among them are Bat Masterson, flashy dresser, some-time lawman, and future newspaperman who greatly embellished the old West's already lurid history; James Earp, saloon-keeper and husband of a former prostitute, now running a brothel; Morgan Earp, lawman and the sunniest of the brothers; Wyatt Earp, lawman, straight arrow, and taciturn lover of horses; and Mary Katharine Harony, well-born Hungarian, educated in the classics, and now an enterprising, if bibulous, prostitute known as "Big Nose Kate."

Kate and Doc are brought together by sexual attraction and a sense of camaraderie arising out of the mutual exchange of pithy quotations from the classics. Kate, who is, not to mince words, a termagant, has no patience for Doc's desire to relieve the suffering of others by the practice of dentistry: He can, she scolds him, make vastly more money by gambling. And this he increasingly turns to as his constant, wracking cough -- and the whiskey he takes to subdue it -- makes delicate work progressively more difficult.

Russell brilliantly conveys Doc's psychological predicament as a genteel, educated Southerner who has been foiled by an unlucky disease and thrust into the life of a hard-drinking gambler. Doc reflects ruefully that the courtesy he shows everyone, regardless of race or condition, is no doubt mistaken as stemming "from an admirable democratic conviction that they were every bit as good as he was. In reality he thought himself no better than they: a significant distinction. It was not a surfeit of brotherly love that informed John Henry Holliday's egalitarianism. It was an acute awareness of the depths of disgrace into which he had fallen."

Much of the story is an imaginative, perceptive re-creation of the personalities of real characters drawn from the whiskey- and blood-soaked annals of the Western frontier. A number of fictional persons are also at large, among them a mixed-race youth, Johnnie Sanders, who is murdered -- maybe for money or maybe by destiny: "The sad truth was," broods a melancholy, resigned Wyatt Earp, "that a half-Indian colored kid like Johnnie was asking to get killed by standing there in his own skin, minding his own business." The mystery of this death adds more poignancy than suspense to the book, for oddly and quite wonderfully, the real dramatic tension arises elsewhere: out of the state of Doc's lungs, the repair of Wyatt's front teeth, a few hands of poker, and the chances and mischances that drive the actors toward the notorious event that propelled them into history and legend.

That, of course, is the gunfight at the OK Corral of 1881, in which the three Earp brothers and Holliday took part. Nonetheless, it stays over the horizon, a conjunction toward which the actors are stumbling, small incident by incident, seemingly by chance. It is, as one might say, no accident that Doc and Kate, the two spouters of Latin axioms on the nature of fortune, are fingered as central to that celebrated shootout, a neat dovetailing of classical fatalism and Western myth. "If he hadn't talked Kate into going back to Doc," ruminates James Earp, some three years hence, shortly after the deadly confrontation, "that damn street fight in Tombstone never would have happened. Wyatt only got mixed up with Ike Clanton after Kate got mad at Doc one night and then got drunk enough to tell Sheriff Behan that Doc was in on the stagecoach robbery that touched the whole thing off. Her story was horseshit of the highest order, and as soon as she sobered up, she took it back."

In an "author's note," Russell says readers will wonder, "How much of that was real?" Her answer is "not all of it but a lot more than you might think." To which I will add that what is "real" includes, paradoxically, what she so deftly transmits: the luminescent aura of a tragic myth.