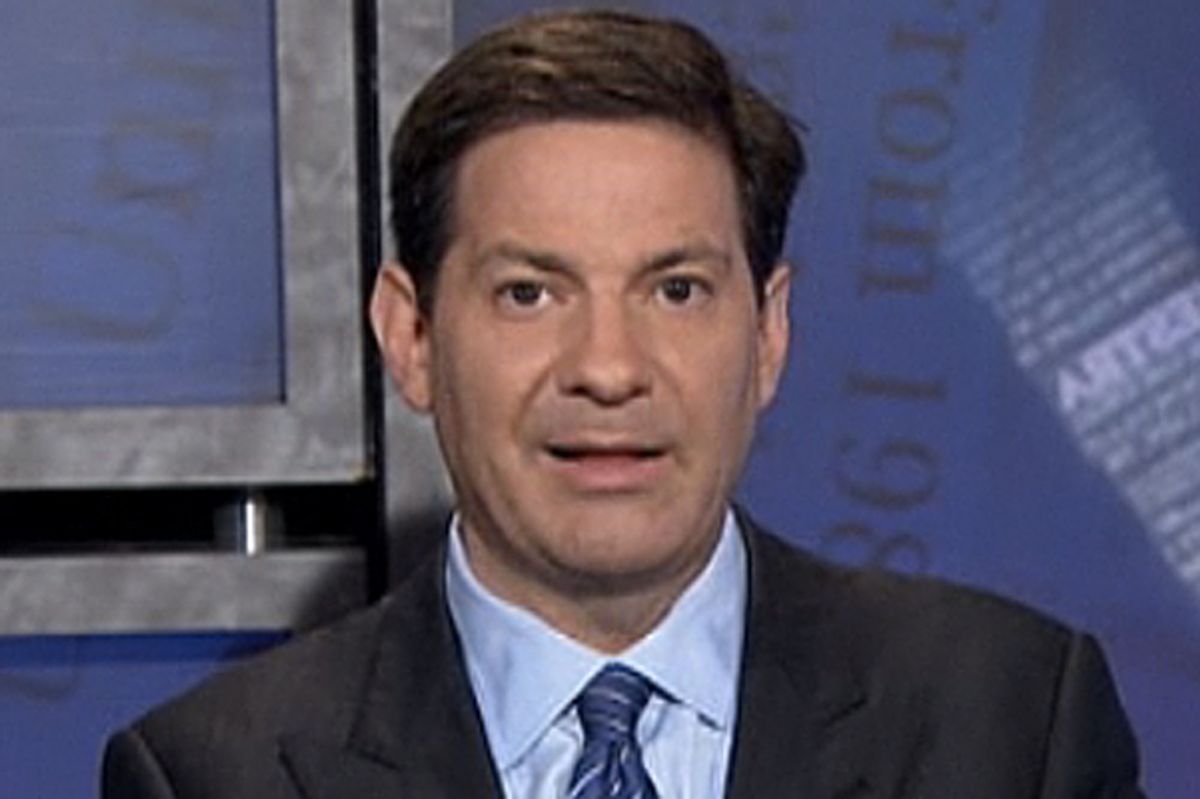 Mark Halperin is a "senior political analyst" for MSNBC, because he co-wrote (with a real reporter) a book full of inane gossipy stories about the 2008 election. If it hadn't been for that book, I like to imagine that he'd be blogging for free for the AOLington Post or something, because he is not a very good political analyst. He demonstrated his inability to "analyze" politics on last night's "Last Word With Lawrence O'Donnell," where he was asked to spend like two minutes saying reasonably intelligent things about Donald Trump and Sarah Palin, which he failed to do:

So, first of all, he thinks Sarah Palin is actually running for president, and that "if she entered this race now and got a few breaks and handled herself well ... she'd be the leader in the national polls and a strong candidate in Iowa and South Carolina at least." OK, fine. I don't think she's going to run still, but I can accept that reasonable people will disagree. But then...

After Lawrence O'Donnell says that a governor who quit her job for no reason before finishing her term doesn't seem interested in running for higher office, and wouldn't win if she tried, Halperin explains that she quit because she was being hounded by ethics complaints!

And she quit the governorship -- I'm not here as an apologist for her -- under the laws of the state her family was going to be bankrupt by litigation and public records requests. She wasn't interested in doing that. I'm not saying that's a positive for her, but I don't think it's a reflection of her ambition, her level of ambition or her interest in public service.

Mark Halperin: Not an apologist for Palin, just repeating what she says, uncritically, on TV.

The "I left office because liberals were bankrupting my family" line is pure nonsense, which is to say it's something Sarah Palin said. Palin owed something like $500,000 in legal bills, mostly stemming from Troopergate, which came well before the small flood of ethics complaints lodged against her after the 2008 election. $500,000 is a lot on an Alaska governor's salary, but it's less onerous when you get a more than $1 million advance per ghost-written book. (Not to mention the fact that Palin is able to raise ridiculous sums of cash from her worshipful followers by typing a paragraph of nonsense on Facebook.) Palin quit to make money. And because she hates governing and seems pretty sick of Alaska, but mostly to make boatloads of cash as a television personality and author.

But that was just a warm-up to Halperin's masterpiece of brainless repetition of things he heard liars say. Next, he insists that Donald Trump's presidential run was real, and that Trump is a strong candidate who could win the nomination if he decided to jump back in. Halperin is very clearly just parroting stupid things Trump and Palin have said, as if those things were either true or noteworthy. This is when O'Donnell begins seeming especially annoyed with Halperin's credulity:

O'DONNELL: Donald Trump has admitted that his NBC contract prevents him from even pretending to run for president again for another 11 months, whereupon he is pretending that he has the kind of wealth to launch an independent presidential campaign. Of course, he doesn't. He works for a living for NBC like you and I do, he doesn't have the money to do it. Is there any possibility that the media can be fooled by Donald once again?

HALPERIN: Yes, although I don't see eye to eye with you on this one either, completely. I think he's much more serious about running before than you do. He spent a fair amount of time about talking to people working for his campaign. I don't know why he would have gone through hours and hours of meetings if it were all just a charade.

O'DONNELL: Because he needed to complete the charade, that was very well done by him.

HALPERIN: He didn't really publicize the meetings very much, they weren't --

O'DONNELL: He got it out to you. He managed to link it out to the people who needed to know it so that he could fake people out. That's the game.

HALPERIN: I think that the reality is you're more right than wrong, but he, like Sarah Palin, looks at this field and says, this is a field that can be taken down by a strong, late entry. And if you've got the ability to manipulate the media as both of them do to an extraordinary extent, you could imagine a scenario of getting in late and riding a populist wave to the Republican nomination. It's never happened before, but they both have the ability, I think, and they both have the ambition to think about doing it more seriously than you do.

According to Halperin, Donald Trump doesn't just want to reenter the race, he could totally drop in late and "ride a populist wave" to the nomination, along with Sarah Palin. Yes, of course. He could totally be the president if he wanted to, he just doesn't want to right now.

Those polls showing that as his fake campaign dragged on actual Republican voters liked him less and less? The fact that his campaign was only ever a thing in the first place because no real candidates were actually campaigning yet and political reporters were bored? The fact that his one solitary "issue" was the president's long-form birth certificate, and the president thoroughly humiliated him on it? I dunno, I heard Trump say he is very popular and could win, so the smart money says Trump is very popular and could win. Political analysis is so easy!