The sneaky excellence of "Men of a Certain Age" 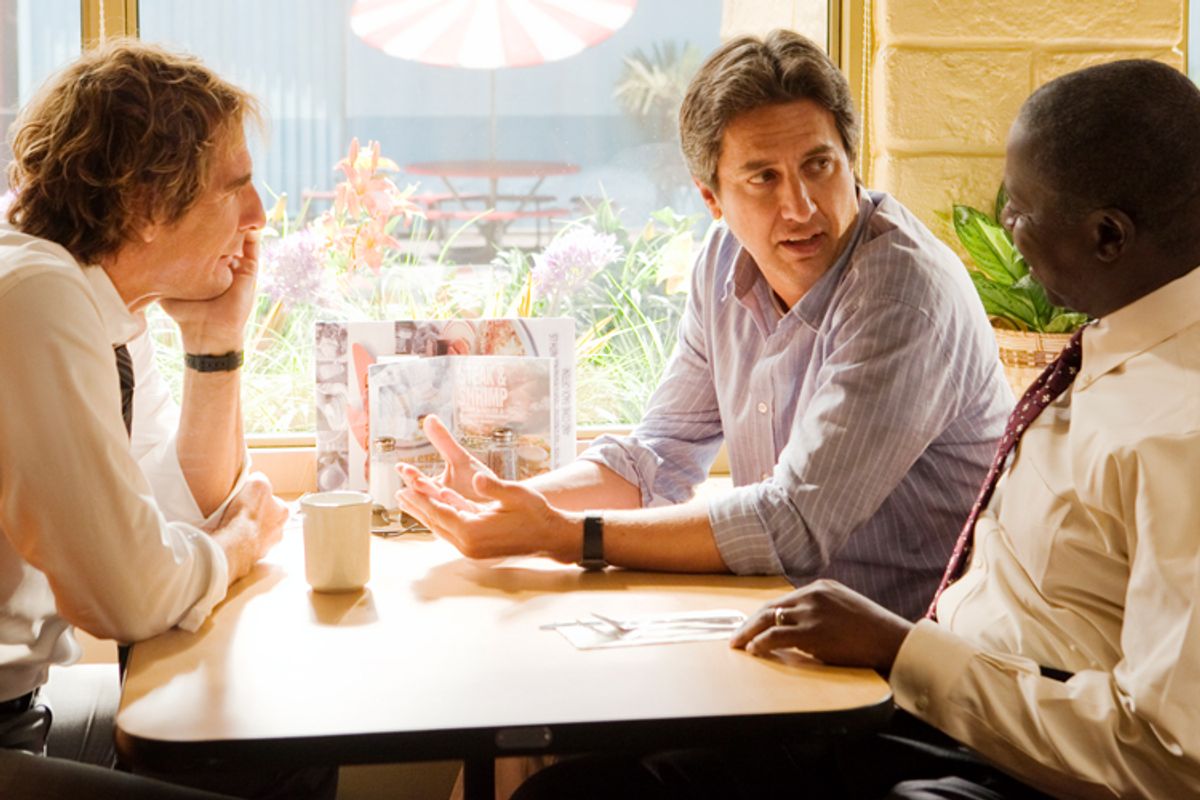 If you'd told me 10 years ago that the star of "Everybody Loves Raymond" would be the driving force behind a smart, poignant, laugh-track-free, beguilingly adult comedy-drama, I might have scrunched up my face like Gary Coleman on "Diff'rent Strokes" and asked, "Watchoo talkin' 'bout?" But here we are in 2011 with Romano's' TNT series "Men of a Certain Age" in its second season, building on an already formidable skill set to become a show worth recapping each week.

Last night's premiere had a provocative title: "The Great Escape." I think it was meant ironically, and that you could interpret it in a couple of different ways -- as an ass-backward confirmation that these guys (and the women in their lives) are stuck with each other (I love Romano's Joe and Penelope Ann Miller's Sonia drifting back together) and that there's ultimately no escape from the mundane irritations of life except, well, you know.

The "you know" is of course being faced head-on by Manfro (the great Jon Manfrellotti), Joe's former bookie turned improbable and awkward friend. I love the relationship between these characters; it feels real, right down to the uneasiness at its core -- the sense that Joe is making a commitment to really, truly be Manfro's friend, rather than simply his associate, because the bookie's got cancer and is heading into chemotherapy, even though the guys have little in common personally and seem to talk at each other rather than to each other, and Joe's passive-aggressiveness and subtle narcissism makes him a terrible listener.  (In the next few episodes, their relationship deepens in surprising and uncomfortable ways.)

I love the subplot with Owen Thoreau (Andre Braugher) being pushed to sell his dad's car dealership and actually considering it with his wife, Melissa (Lisa Gay Hamilton -- how fantastic it is to see her in a real, substantial part), and making promises that he may have trouble executing, and even more trouble keeping. (Braugher is a fantastic light comedian, a quality that was often easy to forget on NBC's "Homicide" because Braugher's role was often so intense; his romantic spirit and masterful phrasing of quips is a tremendous asset to "Men.")

The third plotline seemed, at first, to be the lightest and least special. Terry (Scott Bakula) getting close, probably too close, to Erin (Melinda McGraw), and realizing to his horror that the identity he's built for himself as a no-strings-attached good-time lover is finally coming back around to bite him. He's been such a man-whore for so long that the poor bastard can't even try to get a serious relationship going without having it be interrupted by awkward chats with various women he's slept with. (Bakula's hairpiece, alas, is still dreadful; but on the plus side, this season the other characters are acknowledging it and joking about it.) But Terry's story also deepens in upcoming episodes. He's got some scenes in the third and fourth episodes that may be Bakula's finest moments as an actor, and the ones that tease out that vulnerability that always made him vastly more interesting than most TV leading men.

On a general note, I love how this series is built around small moments and wordless observations. So much will be said with a reaction shot of someone eavesdropping on another character, or a close-up of a significant object. It might sound strange, but at times the show that "Men of a Certain Age" most reminds me of is ABC's uneven but often sneakily powerful domestic drama "Once and Again," which was likewise set in a world of attractive but realistically weathered 40-somethings, and that rarely built its stories around things that couldn't happen in life.