Time is running out for the White House. A lesson from the failed reelection bid of George H.W. Bush 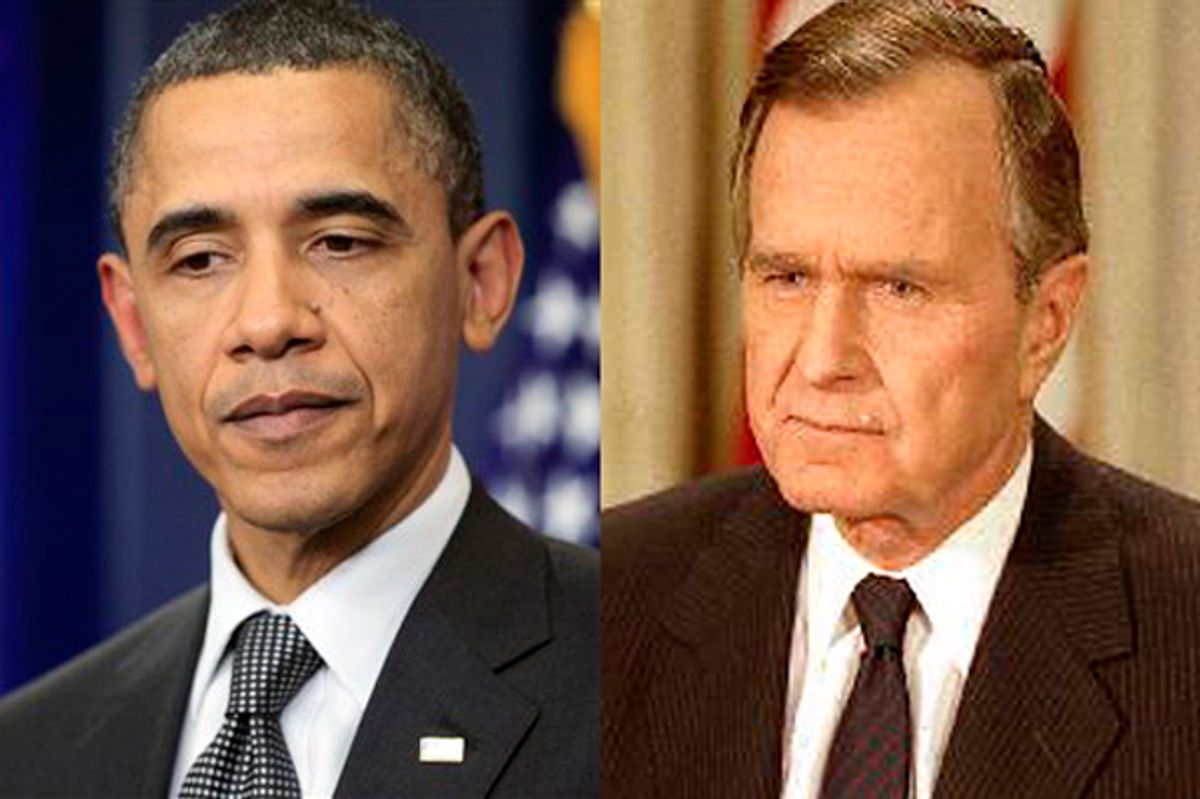 On Oct. 27, 1992, less than a week before Election Day, the Commerce Department reported that the U.S. economy had grown by a surprising 2.7 percent in the third quarter. Seizing his last chance to refute Bill Clinton's "it's the economy stupid" campaign strategy, President George H.W. Bush jumped all over the new numbers.

"We have now had six straight quarters of growth in the United States," Mr. Bush said as he campaigned through Iowa, Kentucky and Ohio. "And yet the Democrats keep telling us that everything is going to hell. And they're wrong."

Ronald H. Brown, the chairman of the Democratic National Committee, said Mr. Bush's reaction was "another example of a failed President grasping at straws."

And specialists working in the campaign of Gov. Bill Clinton, the Democratic nominee, noted that growth in the last six quarters had averaged 1.8 percent -- less than one-third the rate for comparable periods in the other eight postwar recoveries. They said the third-quarter advance could not be sustained.

Guess what? George H.W. Bush was right. Bill Clinton was wrong. The U.S. economy had turned the corner well before the election. Unemployment had been falling steadily from its 7.8 percent peak in July. A month after the election, GDP growth was revised upward to a "surprisingly robust" 3.9 percent.

As the White House awaits the government's next monthly jobs report on Friday, I'm betting that the lessons of 1992 are not forgotten. Everyone knows that a slumping economy can kill an incument's chances of re-election, but more to the point, even a recovering economy, if it happens too late, won't offer much succor. Time is running out for the Obama administration. How voters feel about the economy can't be changed quickly. The next few months will be critical in shaping perceptions, and tomorrow will offer a major reality check.

The tragedy of tomorrow's numbers, however, lies the fact that whether they come in high or low -- and the consensus view fears the latter -- the policy status quo in Washington is more likely to change for the worse than for the better. The Federal Reserve is unwilling to do anything more to stimulate the economy, and House Republicans are determined to prevent the White House from engaging in any kind of aggressive fiscal policy.

House Republicans told the president that they would not support new spending to spur growth during a meeting at the White House on Wednesday.

"The discussion really focused on the philosophical difference on whether Washington should continue to pump money into the economy or should we provide an incentive for entrepreneurs and small businesses to grow," said Eric Cantor, the majority leader. "The president talked about a need for us to continue to quote-unquote invest from Washington's standpoint, and for a lot of us that's code for more Washington spending, something that we can't afford right now."

Sure, there are philosophical differences between Republicans and Democrats. But there's also a serious problem with the Republican position. The GOP purports to believe that spending cuts will provide the necessary incentive "for entrepreneurs and small businesses to grow." But the empirical support for such a theory is thin. When unemployment is high, and there is clear excess capacity in the economy -- idle factories, etc -- subtracting demand from the economy by cutting government spending is far more likely to result in economic contraction than growth. It would be far better to do nothing at all than engage in premature budget cuts.

George H.W. Bush never had it this bad. The economy is currently slowing down, but the most likely policy action to address this will come in the form of spending cuts tied to a vote to raise the debt ceiling. Depending on how quickly those cuts are implemented, the U.S. could be headed directly back into a recession by early 2012. Not only will  there will be no shortage of Republican presidential candidates eager and willing to blame that peformance on another "failed president," but there won't be any time to recover from such a disaster, either.