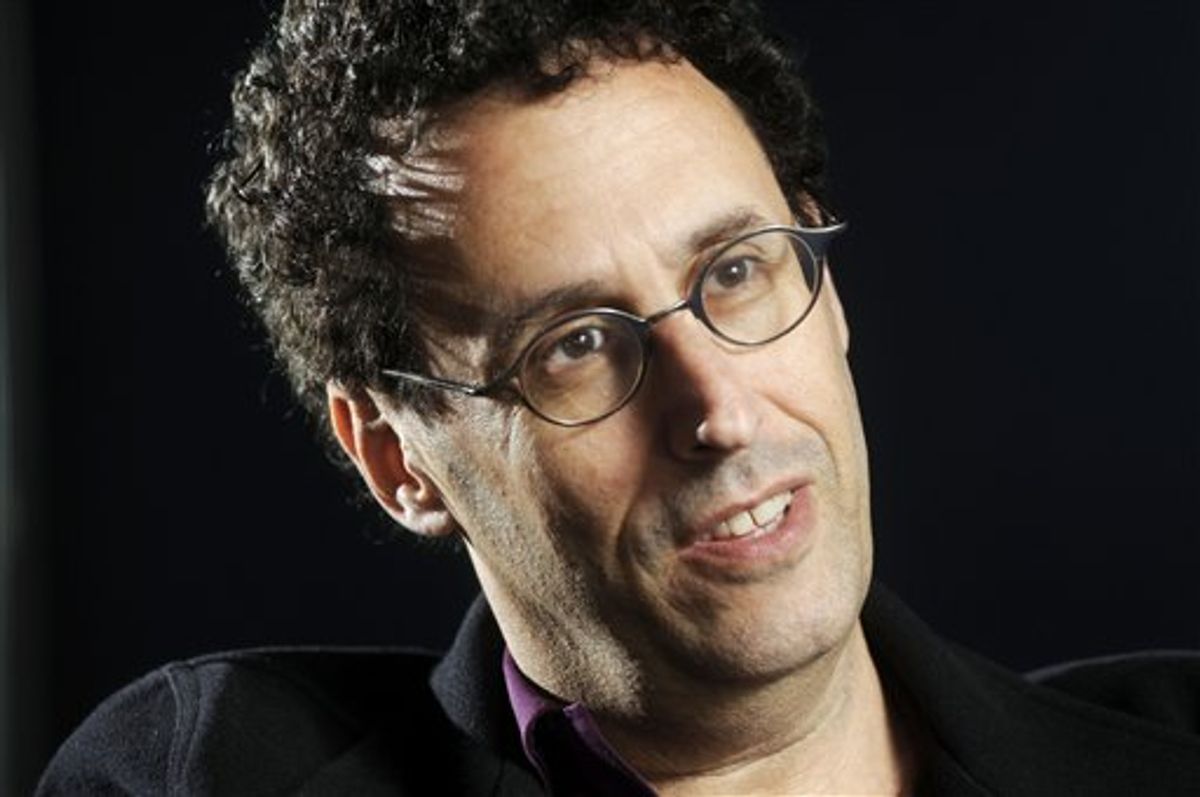 FILE - In this April 30, 2009 photo, Tony Kushner is shown during a break from rehearsal of his new play at the Guthrie Theatre in Minneapolis, Minn., Kushner won a Pulitzer Prize for "Angels in America," his epic play about the AIDS epidemic, and is a New York literary fixture who has received more than a dozen honorary degrees from American colleges and universities. So it was a shock when the Board of Trustees of the City University of New York voted last month to withhold a promised honorary degree after a trustee said the playwright was anti-Israel. CUNY later backtracked under a barrage of criticism, and Kushner will accept his degree on Friday, June 2, 2011. (AP Photo/Craig Lassig) (AP)
--

Tony Kushner won a Pulitzer Prize for "Angels in America," his epic play about the AIDS epidemic, and is a New York literary fixture who has received more than a dozen honorary degrees from American colleges and universities.

So it was a shock when the Board of Trustees of the City University of New York voted last month to withhold a promised honorary degree after a trustee said the playwright was anti-Israel.

CUNY later backtracked under a barrage of criticism, and Kushner will accept his degree on Friday.

But he is still smarting over how a seemingly uncontroversial invitation to a graduation ceremony ended up with trustee Jeffrey Wiesenfeld blasting Kushner as "a Jewish anti-Semite" and a "kapo," a term for Jews who worked for the Nazis in concentration camps.

"I'm not happy about having been called a kapo in the Jerusalem Post," Kushner said.

In the aftermath, critics including The New York Times editorial board called for Wiesenfeld to resign. Some also now are questioning the way trustees are chosen at CUNY, a public university system with 262,000 degree-seeking students at 23 schools. Trustees now are chosen by either the governor or the mayor.

Karen Kaplowitz, head of the faculty senate at CUNY's John Jay College of Criminal Justice, said a committee of faculty members would study how other university systems are governed and make recommendations for possible changes.

"We do think there are better ways," Kaplowitz said. She suggested that an expert panel might be convened to recommend candidates.

The union that represents faculty issued a statement calling for Wiesenfeld's resignation and for changes to the way trustees are chosen.

Union head Barbara Bowen said the board should be composed "of qualified people with genuine expertise in higher education, who will respect the faculty, staff and students in whose interests they serve."

Disputes over honorary degrees are not unusual but typically involve complaints from outside the university administration.

In 2008, students and faculty members at Washington University in St. Louis decried the granting of an honorary degree to anti-feminist crusader Phyllis Schlafly.

When President Barack Obama was invited to give a commencement address at the University of Notre Dame in 2009, thousands protested in an online petition, saying his views on abortion contradicted Roman Catholic teachings.

The brouhaha over Kushner was unusual because a trustee who wants to scuttle an honorary degree would typically voice his or her concerns in private rather than airing them first at a public meeting, as Wiesenfeld did on May 2, said Scott Jaschik, editor of the website Inside Higher Ed.

"Controversies are common," Jaschik said. "This one played out in an unusual way."

Kushner's name was removed from a list of honorary degree candidates after Wiesenfeld, the son of Holocaust survivors, made a speech denouncing Kushner's views on Israel and the Palestinians.

Wiesenfeld said Kushner had accused Israel of "ethnic cleansing." He did not quote directly from Kushner's writings but cited statements from Kushner that he attributed to the website of Norman Finkelstein, a political scientist who angered many Jewish groups with his book "The Holocaust Industry: Reflections on the Exploitation of Jewish Suffering."

Kushner accused Wiesenfeld of distorting his position and complained that he was given no chance to present his own views.

"It's very inappropriate for a trustee to use the board as a platform for grinding axes in public," he said.

Wiesenfeld said he was objecting to Kushner "even if I am the lone dissenter," but the board ended up tabling Kushner's nomination.

Some trustees said afterward they were "blindsided" and thought more discussion was needed. But since there were no regularly scheduled meetings before graduation, the tabling effectively denied Kushner the degree.

The move sparked outrage among academics and fans of Kushner's work -- and some support from conservative organizations. It was reversed in a hastily called executive committee meeting, though Kushner at first said he wasn't sure he would accept the honor anyway.

He changed his mind after Kaplowitz, an associate professor of English at John Jay, asked him to reconsider.

"I told him that we so much wanted to celebrate him, and the faculty wanted to remediate this terrible wrong to him, and have the opportunity to thank him for his incredible contribution to the arts and to public discourse," she said.

Kushner will attend both morning and afternoon ceremonies at the Jacob K. Javits Convention Center because the graduating class of more than 2,000 is too big for one commencement.

His address, he said, "will not be a diatribe about what happened to me. That would be inappropriate."

Wiesenfeld was appointed to the board by Republican Gov. George Pataki, for whom he served as a political operative. His second seven-year term expires in 2013.

Democratic political consultant Hank Sheinkopf, who is acting as Wiesenfeld's spokesman, said Wiesenfeld "was attacked mercilessly" for standing up for his beliefs and is planning to finish his term.

"He expected that he would be alone in the vote," Sheinkopf said, "but the others joined him."