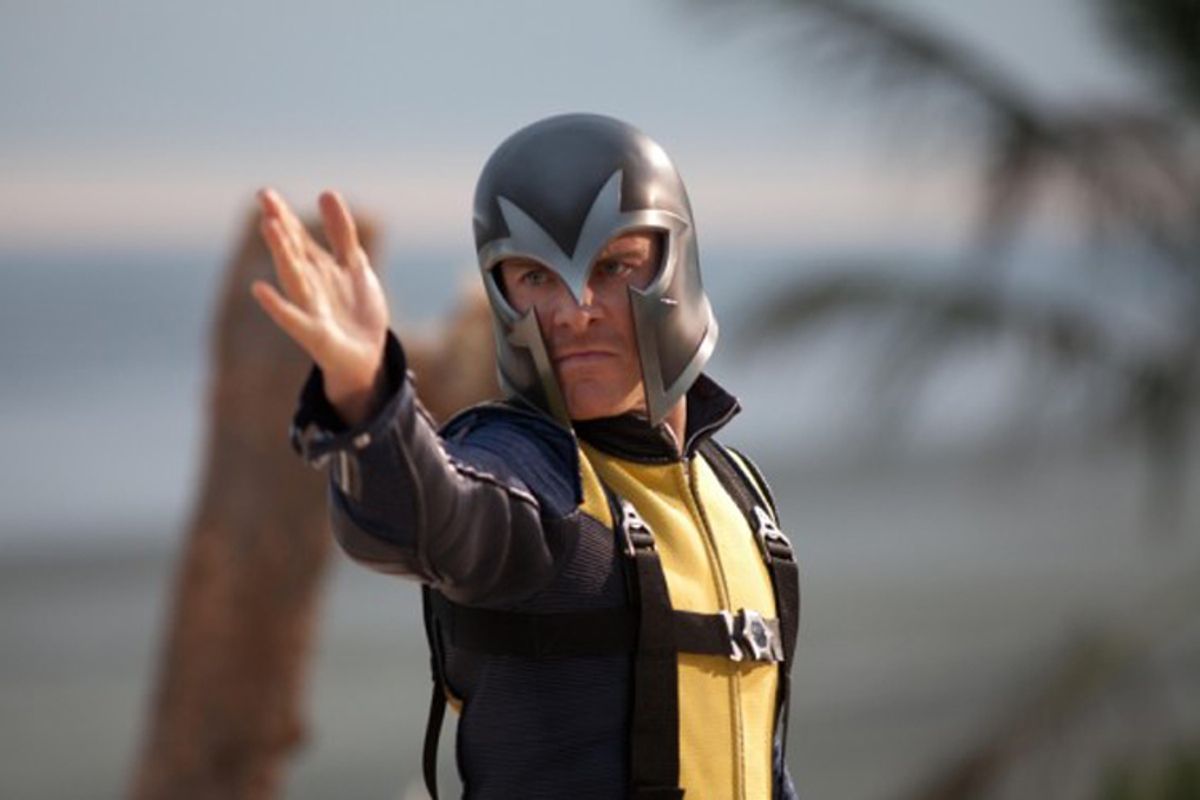 I don't necessarily want to be the guy who tries to hang a discount-store T.S. Eliot essay about the Death of Culture on yet another mediocre Hollywood sequel, but there's something a little depressing about all the hype and excitement surrounding "X-Men: First Class," the new Marvel-Fox product that's expected to be among the summer's biggest hits. Are zillions of people genuinely psyched about an Anakin Skywalker-style back story prequel to a comics-based movie franchise that almost everyone agrees had run out of juice after four installments? (Just from inspecting cast lists and plot synopses, I can't even tell you for sure whether I've seen all of them.) And if so, why?

Oh, OK, I know why. I'm just playing Socratic idiot. It's summertime in spirit if not in fact, and people are covered in beer and bug-juice and have collectively lowered their expectations. They've convinced themselves that they want to see a big, exciting adventure with cool guys and pretty girls and maybe the faintest hint of moral significance but not much resemblance to real life. I suppose a ridiculous yarn about how a group of superhuman genetic mutants in silly costumes intervene to resolve the 1963 Cuban missile crisis (after starting it in the first place) fits the bill, somewhat. But I'm pretty sure that those who are claiming that "X-Men: First Class" is actually good are engaged in the kind of brainwashed magical thinking that goes along with a culture where the entire media and most of the public have to behave like savvy insiders all the time. This is a movie that definitely could have been worse. (Put that on your poster!) It looks good and has some nice acting moments; as a friend of mine used to say about poetry readings, it's better than some TV. If it makes a butt-load of money, all of us parasites on the sweaty underbelly of the film industry are hypothetically better off, so we might as well like it.

This long-winded exposition of the early relationship between comic-book antagonists Professor X, aka Charles Xavier (James McAvoy) and Magneto, aka concentration-camp survivor Erik Lehnsherr (Michael Fassbender), has the brisk, superficial manner and the handsome production design of an early Bond film. (In case you need a primer, those are the characters played by Patrick Stewart and Ian McKellen, respectively, in the earlier-slash-later movies.) In that Bondian spirit, it offers "Mad Men" ice queen January Jones in a succession of revealing and/or form-fitting hotsy-totsy outfits. Unfortunately it's also like a Bond film that's been dragged out, Spielberg-style, to stupefying lengths and overstuffed with episodes and themes, until what began with the feeling of leisurely, almost urbane entertainment starts to feel completely random. I was startled to look up the running time and discover that "X-Men: First Class" is only 104 minutes; the second half is so clunky it feels much longer.

Early in the movie, director Matthew Vaughn ("Kick-Ass") and his credited screenwriters -- there are six of them! Six! -- actually do capture the unhurried, character-rich storytelling style of Marvel Comics. We cross-cut between mind-reading prodigy Xavier (played as a boy by Laurence Belcher), growing up in upper-crust Anglo-American loneliness in a castle north of New York, and Lehnsherr (Bill Milner), experimental subject of a sadistic Nazi who has noticed his telekinetic gift. Said evil Nazi, who will later be known as Sebastian Shaw, is played by Kevin Bacon, and can I just say that Bacon's later career as a sneering villain with perfect, deadpan line delivery is so far superior to his early leading-man career that it's not even funny?

These two boys grow up and turn into sharply dressed adult characters played by McAvoy and Fassbender, but neither of them is all that appealing. Xavier is a simpering, lecherous Oxford don who can read women's minds in pubs, and Lehnsherr can move metal objects with a great deal of emotional pain and bowel-movement grunting. Lehnsherr pursues Shaw through Swiss banks and Argentine gaucho taverns and luxury yachts that turn into submarines, while Xavier gradually learns that he and his blue, feathery, awkward stepsister Raven (a severely disappointing performance from Jennifer Lawrence, last year's Oscar nominee) belong to a tiny but detectable new subgroup of the human species.

Once Vaughn has Erik's hunt for Shaw, Xavier's secret CIA project to recruit and train mutant warriors, the tense friendship between the two of them that will eventually go awry and their incipient erotic triangle involving the perpetually boy-crazy Raven, that's way more than enough story for one 21st-century summer action flick. But it's as if each of the six writers were assigned one plot thread and couldn't be fired, so we keep getting more and more wounded mutant characters -- some of whom are killed off or defect to the dark side before we even know their names -- and more and more levels of soap opera.

There's a girl with dragonfly wings and a guy with prehensile, ape-like hand-feet and the cool black guy who dies right away (it's the early '60s, after all, and African-Americans were even more subject to Early and Unexpected Movie-Negro Death Syndrome than they are today) and a guy who seems to be a human cleaning product and a different guy whose mutant gift is that he's actually Satan. There's January Jones clad in diamonds -- and I mean entirely encased in diamonds -- and/or white lingerie, using her remarkable gift to be beautiful and almost entirely anti-erotic at the same time. There's Shaw's scheme to launch World War III and follow it up with a mutant-led Fourth Reich, there are a bunch of knockoff-"Strangelove" scenes in Moscow and Washington where guys in uniforms plot nuke-ular war. There are some reasonably energetic mutant-fu fight scenes, but the more of them Vaughn packs in the worse they get. The problem with fights between superhuman characters is that we don't understand what they can and can't do, so the rules of physics don't apply and it all starts to look like visual clutter very quickly.

While the whole film is professionally executed and goes down smoothly enough, the underlying stupidity of its subject matter can't help but show through in the end. I was left wondering why I'd spent more than two hours in the dark watching a story about how a kid who survived the concentration camps grew up to be an adult who wears an embarrassing faux-Spartan helmet and calls himself Magneto (rhymes with neato). I kept waiting for McAvoy and Fassbender, two first-rate young actors who generally have shown pretty good judgment, to burst out laughing and chuck the ludicrous costumes overboard. Yeah, there are some interesting issues submerged in "X-Men: First Class," if you insist on looking for them: the intense, not-quite-erotic relationship between Xavier and Lehnsherr; the level of racial and cultural allegory; the fact that everything the evil Shaw says about the human-mutant relationship is true. But mostly this is a movie that's trying to get by on cool threads, a general air of suavity and the fact that it's not quite as terrible as things that are truly terrible.