Mladic tells court he does not want to enter pleas 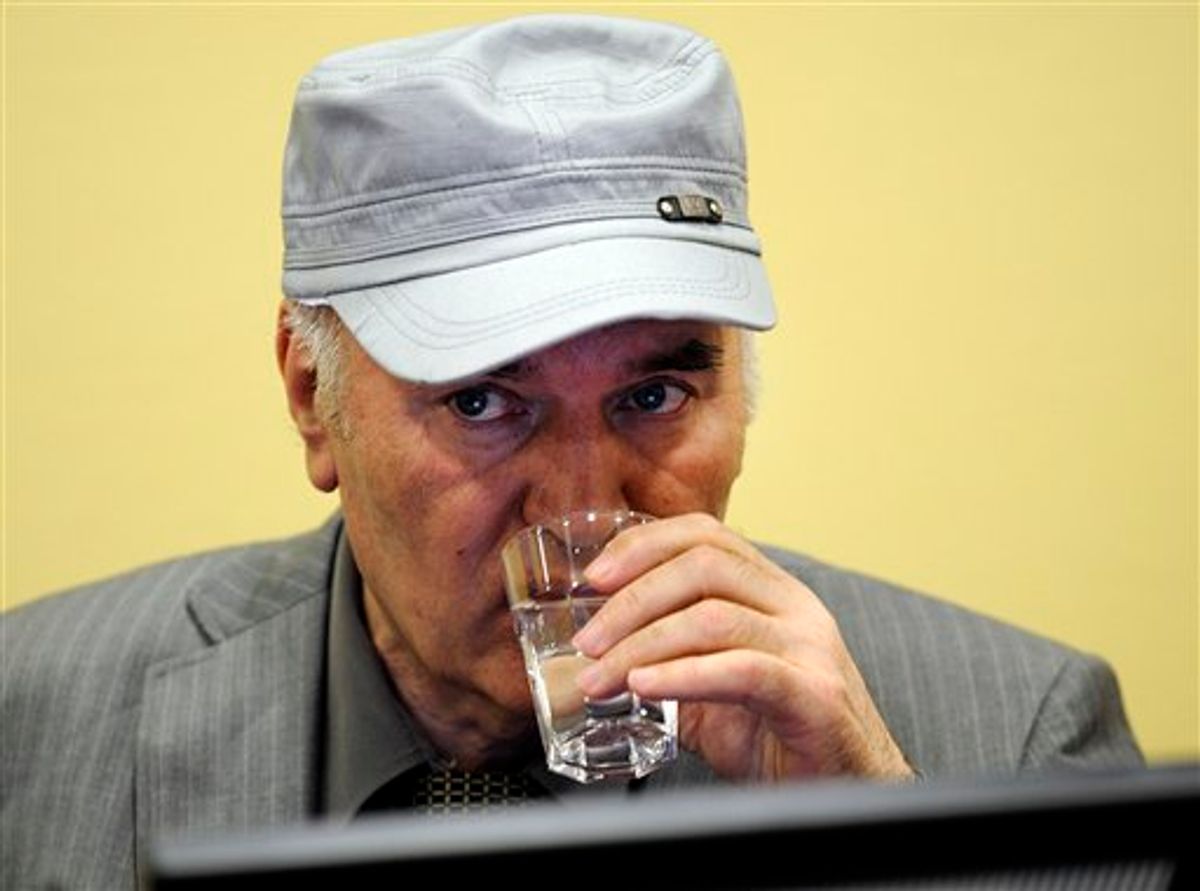 Former Bosnian Serb Gen. Ratko Mladic drinks water in the court room during his initial appearance at the U.N.'s Yugoslav war crimes tribunal in The Hague, Netherlands, Friday, June 3, 2011. Mladic's appearance Friday at the Yugoslav war crimes tribunal in The Hague is his first public appearance since he went into hiding nearly 16 years ago, when he was indicted for genocide and war crimes committed in the 1992-95 Bosnian war. (AP Photo/ Martin Meissner, Pool) (AP)
--

Asked by Presiding Judge Alphons Orie if he understood his rights as a suspect at the Yugoslav war crimes tribunal, Mladic said he was gravely ill and needed more time to understand the charges.

He gruffly told Orie he did not want "a single letter or sentence" of his indictment read in court and when asked if he wanted to enter pleas, replied that he did not want to respond to the "obnoxious charges" and "monstrous words."

Mladic asked for the hearing to go into private session -- meaning the public and media could not hear what he said -- to discuss his health.

His family said after his arrest last week that he had suffered two strokes while on the run from an indictment for genocide and war crimes committed in the 1992-95 Bosnian war.

Mladic appeared unable to use his right hand during the hearing and his voice sounded slightly slurred. Guards had to help him put on a headset so he could listen to a simultaneous Serbian translation of the hearing.

But he had lost little of the bluster he demonstrated during the war. He saluted -- with his left hand -- to the public gallery at the start of the hearing and gruffly told Orie he did not want "a single letter or sentence" of his indictment read in court.

Orie, nevertheless, read a summary of the 38-page indictment and all 11 charges.

After Mladic said he would not enter pleas, Orie said he has 30 days to do so and scheduled a fresh hearing for July 4. If Mladic continues to refuse, the court will file not guilty pleas on his behalf.

Mladic's arraignment was his first public appearance since he went into hiding nearly 16 years ago. Wearing a gray suit, tie and cap, he stood looking bullish between two guards, who each held one of his arms to support him, as the hearing started. He took off the cap when he sat down to reveal a nearly bald head.

He spoke slowly -- his stare as steely as during the war when he was the strutting leader of the Bosnian Serb army -- and appeared to understand the proceedings clearly.

"I am Gen. Ratko Mladic," he said in Serbian as Orie asked him to confirm his name.

Mladic's one-time political boss, former Bosnian Serb President Radovan Karadzic was appearing Friday in a neighboring courtroom at the war crimes tribunal for his own trial on identical charges of masterminding Serb atrocities, including ethnic cleansing purges of non-Serbs, the shelling and sniping campaign that terrorized Sarajevo for four years and the 1995 massacre of 8,000 Muslim men and boys in Srebrenica.

Mladic and Karadzic were indicted together in 1995, but their cases were separated after Karadzic was arrested on a Belgrade bus in 2008.

Mothers and widows from Srebrenica were among the dozens of people watching the arraignment from a public gallery separated from the courtroom by a wall of bulletproof glass. One man stood outside court with a white banner emblazoned in red letters with the text: "Mladic, Butcher of Srebrenica!"

They expressed fears that Mladic may be too ill to complete the trial process that is expected to take years.

Axel Hageldoorn, a lawyer representing victims, said "it's a big relief that he finally can be brought to court. But we are a bit concerned he is too sick to follow the trial to its end and there will be no verdict."

That fate overcame former Yugoslav President Slobodan Milosevic, who died of a heart attack in his cell in 2006 before his trial could finish.

Munira Subasic, Head of the Mothers of Srebrenica Association, said she had mixed feelings about Mladic's appearance.

"Happy to be here to see, once again, the bloody eyes of the criminal who slaughtered our children in 1995," she said. "And I am sad because many mothers didn't live to see this -- mothers who found bones belonging to their children, buried them without heads and hands and the only wish they had was for him to be arrested. But they didn't live to see it."

Subasic was overcome by emotion as Orie read out details of the Srebrenica massacre, appearing to wipe tears from her face.

Mladic finally was arrested last week by Belgrade security authorities in a move expected to speed Serbia's accession to the European Union.