How John Edwards nearly ruined everything 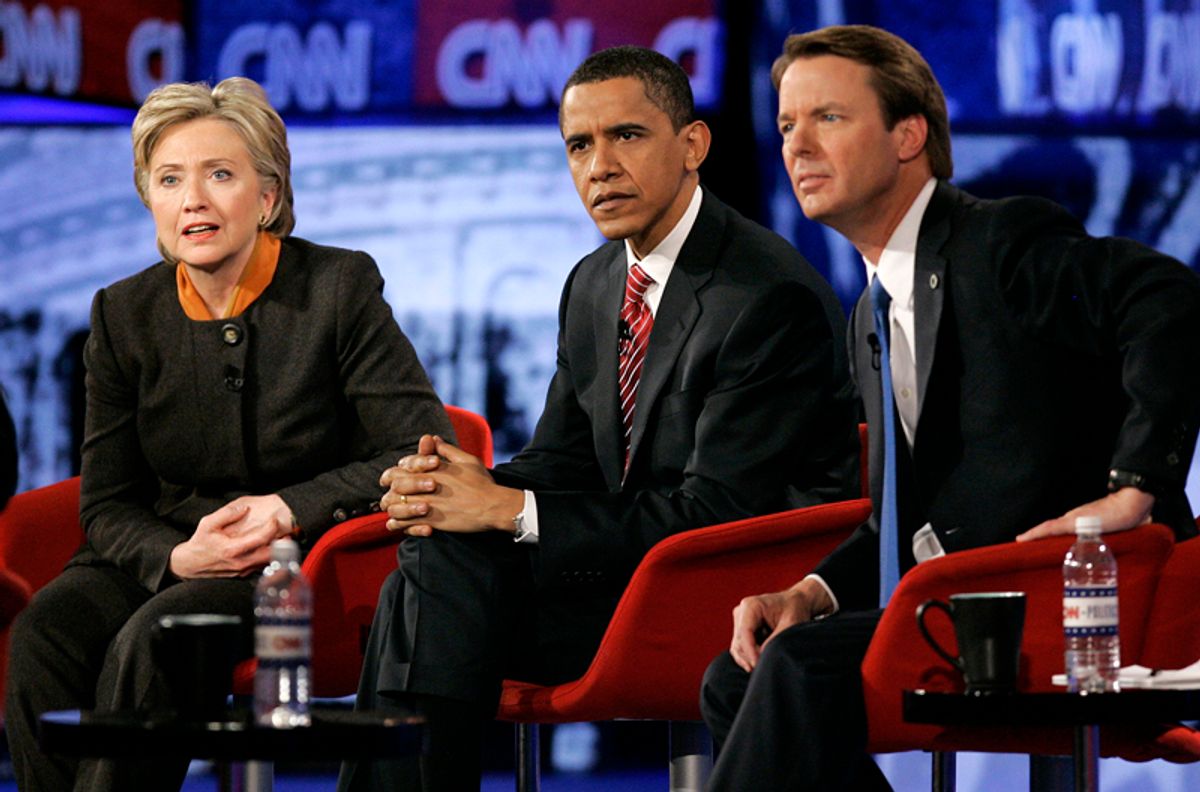 History will record that John Edwards -- who was finally indicted Friday after a protracted investigation into his use of campaign money to hide a mistress -- didn't win a single state in his 2008 presidential campaign and earned just 26 pledged delegates before dropping out of the Democratic race after finishing third in the South Carolina primary. But things could have easily gone far, far better for him -- and far, far worse for his party.

It's easy to forget now, but in the early stages of the '08 race, things were setting up remarkably well for Edwards. After making a favorable impression in the 2004 primaries and performing adequately (if not quite as well as many had expected) as John Kerry's running mate that fall, Edwards sought to reinvent himself as a truth-telling populist, angling to inherit the army that Howard Dean had briefly assembled in the '04 race. He began by apologizing for his own vote as a senator in 2002 for the Iraq invasion and took to railing against Democratic leaders in Washington for their supposed spinelessness in standing up to George W. Bush and congressional Republicans. It helped that he was now a former senator, free to travel the country spouting absolutist rhetoric in casual clothing.

There was a very specific purpose to this. Hillary Clinton would be the overwhelming front-runner for the 2008 nomination, everyone knew, the favorite of many of the big donors and pragmatic establishment types that Edwards had cultivated in '04. The only room would be to Hillary's left, where grass-roots Democratic voters and activists remained infuriated by the role their party's national leaders had played in authorizing the war. This was the turf Edwards would seek out.

And for a while, it worked. Through 2005 and the first half of 2006, Edwards' support in national Democratic polls slowly ticked up, until he was running second to Hillary among likely '08 candidates. Meanwhile, Kerry, who very much wanted to run again, also tried reinventing himself as more blunt, unrestrained ideologue, but to little effect; his support steadily dropped into the single digits. And Dean took on the chairmanship of the Democratic National Committee, effectively removing himself from the '08 mix. The chief threat to Edwards' strategy, it seemed, was Al Gore, whose grass-roots popularity was soaring with the acclaimed release of "An Inconvenient Truth." But Gore was an unlikely and reluctant prospect. As the summer of 2006 wore on, a very real path to victory emerged for Edwards: Defeat Clinton in Iowa's activist-dominated caucuses, survive New Hampshire, then win again in Nevada with union support, and finish Clinton off in South Carolina, Edwards' native state.

Who knows what would have happened if at this same moment Barack Obama, then less than two years removed from the Illinois state Legislature, hadn't set out to help a few of his party's candidates in the '06 midterms and been overwhelmed by the size of the crowds that greeted him? During his first year in the Senate, Obama hadn't seriously considered a presidential run; in fact, he'd ruled it out over and over. And the press and political observers had no reason to doubt him: He hadn't done anything yet, barely had any experience on the national stage, and was famous only because of one speech. Obviously, he would wait until 2016 or some future date to run for president.

By December, it was clear Obama was running, and that was basically it for Edwards, whose dreams of cornering the grass-roots, anti-Hillary market were ruined. Now it was a Hillary-Obama race, with Edwards relegated to a supporting role. But he still had enough support to press on, even after the March 2007 news that his wife's cancer had returned and was now terminal. He'd need one of the front-runners to stumble -- and he finally saw his chance in the first week of January 2008.

Just weeks earlier, the first report of Edwards' affair with Rielle Hunter (and the child they had conceived) had emerged, but in the National Enquirer only; no mainstream outlet would touch them. Even if Edwards' story seemed a little fishy, everyone gave him the benefit of the doubt over a trashy tabloid, and the campaign proceeded as if nothing had happened. Thus, when the Iowa caucuses were held on Jan. 3, Edwards was able to finish a surprising second -- eight points behind Obama but slightly ahead of Clinton. Suddenly, Hillary the Inevitable was on the ropes. Her poll numbers nationally and in New Hampshire, which would vote five days later, crashed overnight, while Obama's surged. Edwards saw his opening: If Hillary suffered a bad loss in New Hampshire, she might be forced out (or at least marginalized). Then it would be an Obama-Edwards race, and the battleground would shift to the South. He could win a one-on-one race with Obama there, or so he and his team figured.

For the five days between Iowa and New Hampshire, Edwards did everything he could to bury Clinton, attacking her as a protector of the status quo, without laying a glove on Obama. It seemed to be working. Hillary's numbers kept falling. There was talk that Edwards, whose message and personality had never been a good fit for the Granite State, might edge her out for second place. Then came the debate, the Saturday night before the primary. To any fair-minded viewer, it looked like exactly what it was: Edwards and Obama -- the two men in the race -- ganging up on Hillary. The reviews were harsh. It was just too much. No one can be sure exactly why Hillary was able to reverse her polling slide and prevail in New Hampshire three days later, but it's hardly unreasonable to suggest that voters -- particularly female voters -- felt she was being treated too harshly by her opponents and the media and rallied around her, not wanting to see her campaign end so soon.

Whatever the explanation, Clinton's surprise triumph slammed the door on Edwards' nomination chances. It was still a Hillary-Obama race and Edwards was still an afterthought. By the end of the month, he was out of the race, and Democrats were safe. Obama went on to win the nomination and the presidency, but there's little doubt that Hillary would have been just as successful against John McCain.

But Edwards, as we all found out a few months later, would have been a complete and total disaster. And things didn't have to work out quite so neatly for Democrats. If Obama, truly a once-in-a-generation political phenomenon, hadn't emerged, Edwards probably would have gotten his one-on-one race with Hillary -- a race he could have won. And if Hillary hadn't engineered that miraculous New Hampshire victory -- a result that still baffles political observers -- he still might have found a way to win the nomination. For Democrats, he could easily have ruined everything.