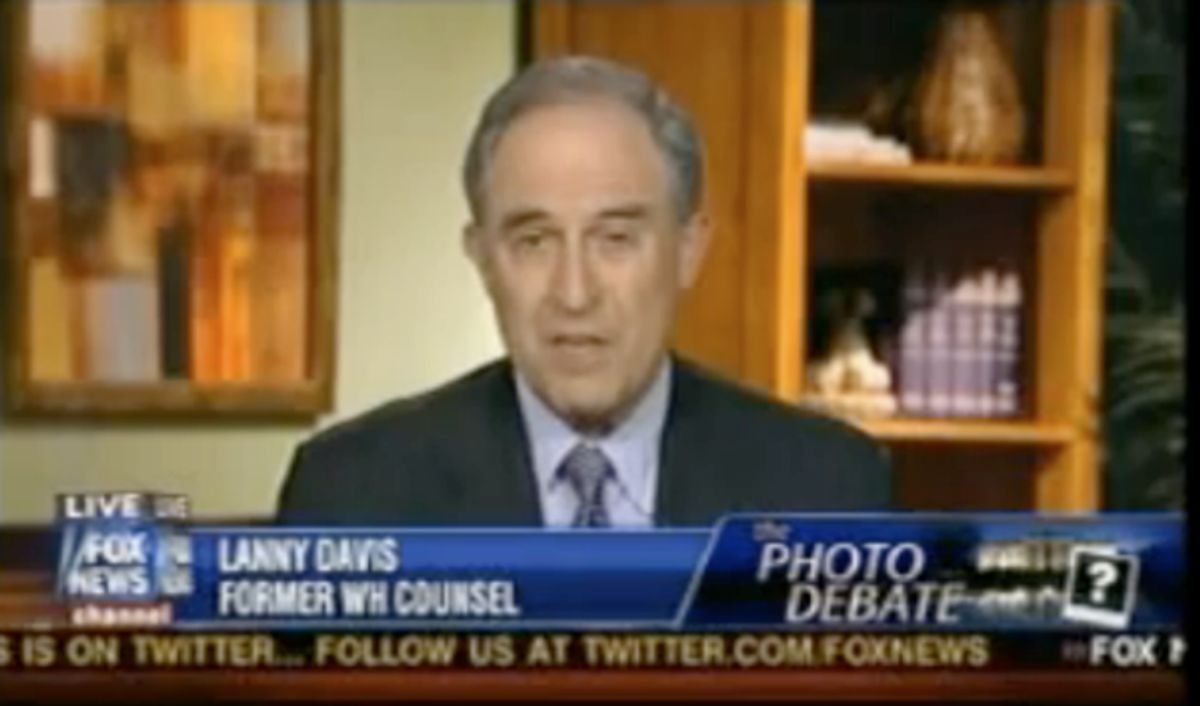 No one has gotten more mileage out of the phrase "liberal Democrat" than Lanny Davis.

The former special counsel to Bill Clinton and self-described "high-profile crisis manager" has built a lucrative lobbying career by offering himself up as a prominent Democrat who will push distinctly right-leaning causes. Ditto for his political punditry -- he writes a column that runs in the Hill, Huffington Post, the Daily Caller, and the website of Fox News (he's also a contributor to the network who frequently appears on the air).

His column this week -- which began with the phrase "As a liberal Democrat" -- caught our attention as a particularly striking example of Davis' M.O. The piece ran under the headline, "Time for Democrats to Put Up on Medicare Cuts." In it, Davis argues that the strategy being pursued by congressional Democrats -- the defense of Medicare in the face of GOP attacks -- is wrong. And he goes on to call for cuts in the popular program. Davis also refers to the national debt as "the great moral issue facing our nation," which sounds a lot like a Republican talking point.

Indeed, a review of his past statements shows that when Davis starts throwing around the phrase "liberal Democrat" or some variation, it's a good sign he's about to tack right. For future reference, we put together a quick guide to what Davis really means when he says he's a liberal Democrat:

What he said: "Beginning in 1968, and through 1992, we liberal Democrats had largely given up hope that we could maintain our liberal principals and still be competitive in presidential elections. It was the Democratic Leadership Council or DLC, created by a young congressional staffer from Indiana named Al From, who gave us back hope of winning back the presidency."

What he was advocating: A recommitment to Third Way-ism and the principles of the Democratic Leadership Council, a corporate-funded centrist outfit from the 1990s despised by most progressives.

What he said: "I’ve been a liberal Democrat all my life. I haven’t changed my values. But what am I supposed to do if the leader of a country comes to me and says he wants to get right with the world, and get right with the United States?"

What he was advocating: His own high-paid lobbying work for the Ivory Coast strongman who was violently attempting to hold on to power after losing an internationally recognized election.

What he said: "But what is ironic is that here I am a liberal Democrat -- if it was a Republican administration with a regulation that hurt minorities and poor and lower income students, we would be on our feet outraged."

What he was advocating: Defeat of regulations proposed by the Obama administration to crack down on abuses by for-profit colleges, whose source of revenue is federal student loans. Davis was a paid lobbyist hired by the for-profit industry.

What he said: "I am a pro-choice liberal Democrat."

What he was advocating: Acquiescence to the inclusion of the anti-abortion Stupak-Pitts Amendments in the health care reform bill -- which, of course, was fiercely opposed by liberal Democrats in Congress.

What he said: "Fellow Democrats, fellow liberals: Let's reach out to Republicans and independents in the country, show them we are willing to compromise and give up the public option ..."

What he was advocating: See above -- abandonment of the key progressive priority in the health care overhaul bill.

What he said: "I'm proud to call myself a pro-labor liberal Democrat who believes that reforms are needed to provide a level playing field for both labor and management, but not at the expense of a guaranteed option for a secret ballot by both workers and management and certainly not at the expense of preserving the historic process of private, voluntary collective bargaining."

What he was advocating: The defeat of a major progressive agenda item -- so-called card check -- that would have made it easier to form unions. At the time, Davis was working as a paid lobbyist for Whole Foods, Costco, and Starbucks.

What he said: "For the purpose of full disclosure, I must tell you that I am a liberal Democrat and a supporter of Sen. Barack Obama for President."

What he was advocating: The idea that John McCain should "create a positive narrative and theme by reminding voters that he is a Teddy Roosevelt-type of Republican." The column was titled, "Advice to John McCain: Be John McCain."