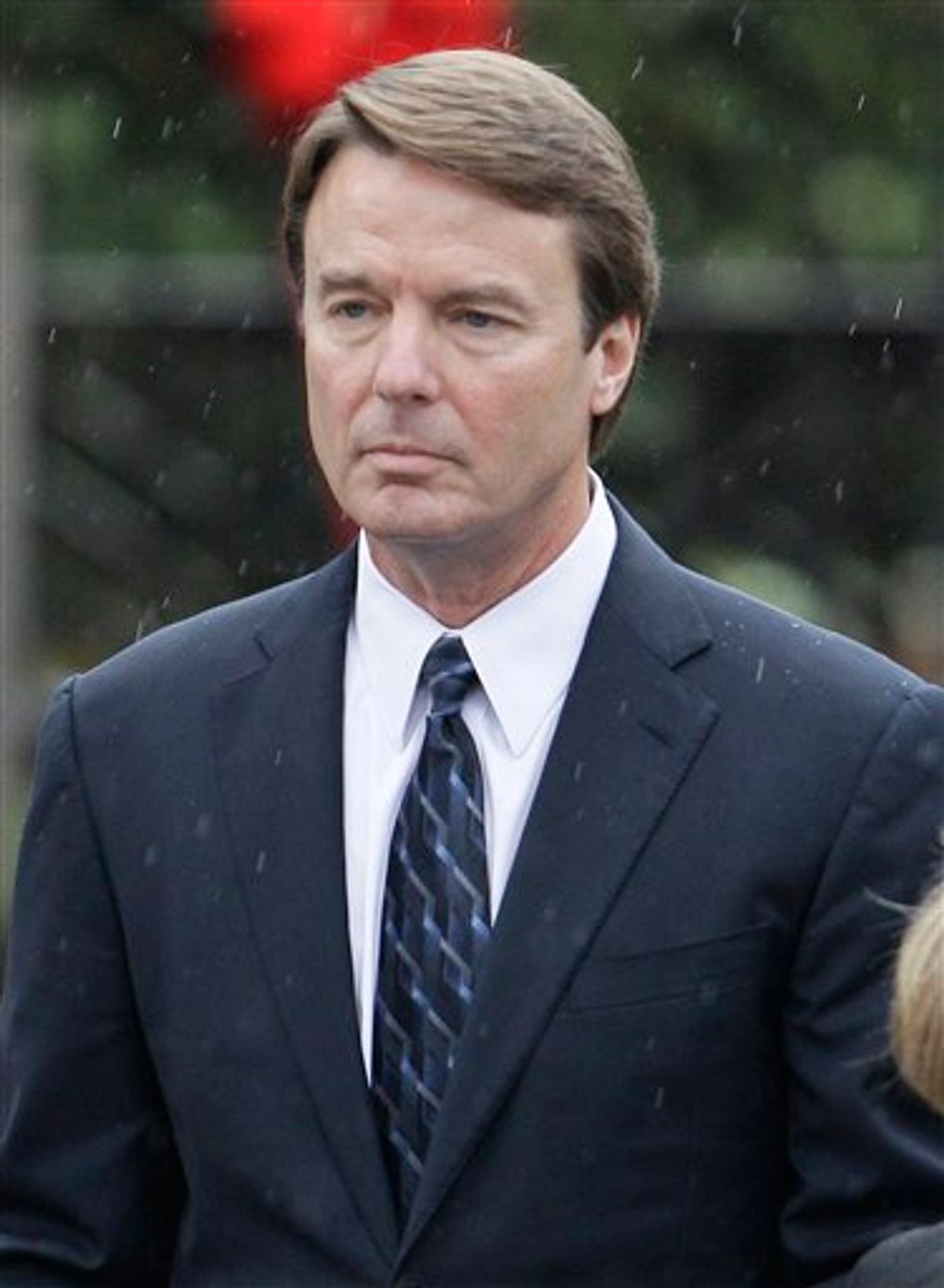 FILE - In this Dec. 11, 2010 file photo, former Democratic presidential candidate John Edwards is seen in Raleigh, N.C. Edwards and federal prosecutors are arguing over whether the money used to cover up his extramarital affair was a campaign contribution or just a gift from his old friends. An indictment of the 2004 Democratic vice presidential nominee appears imminent, but people on both sides still hold out hope for a last-minute deal for a guilty plea to a negotiated charge. (AP Photo/Gerry Broome, File) (AP)
--

A federal grand jury has indicted two-time presidential candidate John Edwards over massive sums of money spent to keep his mistress in hiding during the peak of his 2008 campaign for the White House.

The case of USA v. Johnny Reid Edwards contains six counts, including conspiracy, four counts of illegal campaign contributions and one count of false statements. The indictment was returned in the Middle District of North Carolina Friday.

An Edwards spokeswoman said she wasn't aware of the filing and declined immediate comment.

The indictment is the culmination of a federal investigation that lasted more than two years and scoured through virtually every corner of Edwards' political career.

Criminal charges were likely to be filed Friday against John Edwards, the culmination of a two-year federal investigation into money used to cover up an extramarital affair during the 2008 presidential election.

Edwards' attorney Greg Craig was traveling to meet with prosecutors in North Carolina, an indication that the former presidential candidate will likely be charged, either in a grand jury indictment or in a negotiated charge to which he would plead guilty.

A person with knowledge of the investigation said Craig, a Washington lawyer who was President Barack Obama's first White House counsel, planned to be in his client's home state Friday, where prosecutors were prepared to file charges. The source insisted on anonymity in order to discuss the private negotiations.

Prosecutors have told Edwards they will charge him Friday but plea negotiations continue, so a grand jury indictment or deal on a negotiated charge are both still possible, the person said.

Federal officials have approved criminal charges, deciding that the hundreds of thousands of dollars two Edwards donors gave to help keep his mistress in hiding were contributions that should have been reported publicly by his campaign fund because they aided his bid for the Democratic White House nomination. Edwards' lawyers have argued that the funds were gifts from friends intended to keep the affair a secret from his wife, Elizabeth, who died of cancer in December.

A plea to a felony charge involving campaign finances could strip Edwards of his law license and end any hope he could work as an attorney for the poor. And a trial would mean more sordid stories about his campaign affair and the child he fathered during it, further battering his reputation.

Even if he were to win the case, it appears the 2004 Democratic vice presidential nominee would do so by making a humiliating argument: that money used to keep his mistress and out-of-wedlock child in hiding was intended to shield the affair from his cancer-stricken wife -- not to aid his candidacy, which is what prosecutors believe.

"Trial or not, John Edwards is the Charlie Sheen of American politics -- great hair and no chance for rehabilitation," Democratic consultant Jack Quinn said.

Political sex scandals can either be just a career glitch (think Newt Gingrich, who recently announced a run for the presidency) or a career-ender (think Mark Foley, who recently declined a run for mayor of West Palm Beach, Florida). Many Democrats believe Edwards falls into the latter category, as someone who faces little chance of revitalizing his image even if he emerges victorious from his legal case.

Edwards' attorneys have denounced the investigation as a waste of resources and contend he did not violate the law.

Edwards has said he hopes that once this case is behind him he can revive his legal career, specializing in helping the victims of poverty he championed on the campaign trail. However, a lawyer in North Carolina who pleads guilty or no contest to a criminal offense faces disciplinary action by the State Bar, ranging from a mild rebuke to a loss of license to practice.

The case against Edwards focused on the private money used to keep Edwards' mistress in hiding. Andrew Young, a former aide to Edwards, initially claimed paternity of mistress Rielle Hunter's child and traveled around the country keeping her in seclusion. Young has said he received hundreds of thousands of dollars of support from two wealthy Edwards donors.

Another dent in an Edwards' revival is moving ahead in civil court, where Young and Hunter are battling over a purported sex tape involving the former candidate. Edwards has been deposed as part of that lawsuit.