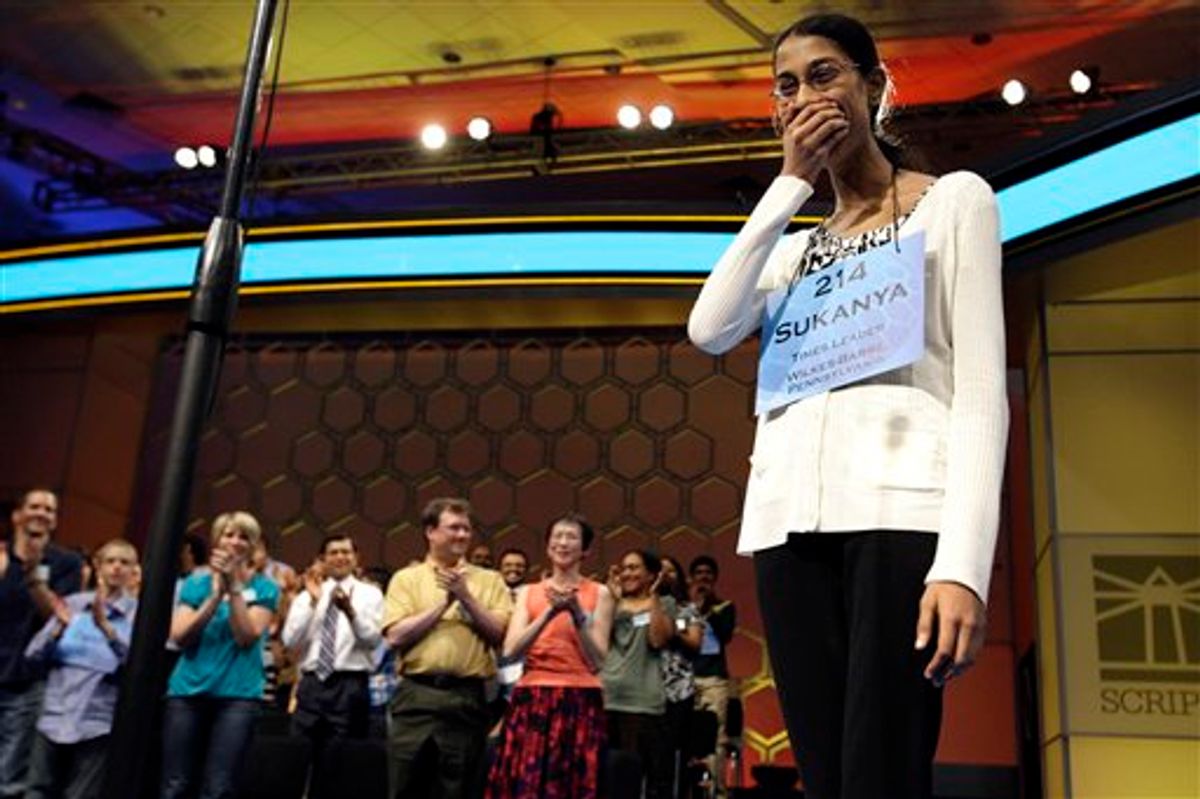 It went on and on and on. Five spellers who seemingly had memorized the entire dictionary simply could not be stumped with any word tossed their way. It was getting late, way past bedtime and well beyond the time slot allotted by ESPN for its telecast.

Finally, after 21 consecutive spellings without a miss, one of them finally flubbed a word. Eventually, the others were gone -- having heard the telltale bell of elimination -- except for 14-year-old eighth grader Sukanya Roy of South Abington Township, Pa., who took home the trophy and the more than $40,000 in cash and prizes Thursday at the 84th Scripps National Spelling Bee.

Sukanya's winning word was "cymotrichous," which relates to wavy hair. She likes hiking, rock climbing and ice skating, wants to travel and perhaps pursue a career in international relations. She is the fourth consecutive Indian-American to win the bee and the ninth in the last 13 years, a run that began when Nupur Lala captured the crown in 1999 and was later featured in the documentary "Spellbound."

"They look up to that. But I don't know how that impacted her," said Sukanya's farther, Abhijit Roy. "This is not something we pressurized her to do. She wanted to do this by herself, and we basically just helped her along. It's a few years; this didn't happened overnight."

Laura Newcombe of Toronto was the runner-up. The 12-year-old was trying to become the first Canadian to win the bee, but she went out on the word "sorites," her look of concentration turning suddenly to a sad one when she realized she'd misspelled it. Canadians have been a strong presence at the competition for many years and have had several close calls, with Nate Gartke of Alberta also finishing second in 2007.

"I was proud, happy and felt this was a privilege" to represent Canada, she said.

Thirteen spellers made the finals, an ever-growing chic-to-be-geek event that was broadcast in prime time for the sixth consecutive year. It was held at the National Harbor complex along the Potomac River, south of Washington.

Only one speller misfired in his first attempt in the finals: Samuel Estep of Berryville, Va., who couldn't handle "bondieuserie" and made the slow walk across the stage to receive a hug from his father.

The rounds kept getting tougher. Sriram Hathwar of Painted Post, N.Y., warmed everyone's hearts by greeting the audience with a "good evening" every time he stepped to the microphone, but he was ousted by the word "polatouche." Another Canadian, Veronica Penny, couldn't handle "rougeot" and made a ballerina-type wave as she walked away.

But then it came down to a final five that wouldn't give up. Sukanya, Laura, Dakota Jones of Las Vegas, Arvind Mahankali of New York and Joanna Ye of Carlisle, Pa., combined to spell everything -- from "abhinaya" to "capoeira" to "cheongsam" to "opodeldoc" -- through Rounds 11, 12, 13, 14 and into 15.

"I thought the five spellers were going to be staying on stage for an eternity," Arvind said.

"I was, like, what if they could declare five-way, co-champions?" Joanna said. "I just didn't want to be the first one to break the streak."

When Dakota finally misspelled "zanja" to end the remarkable run, he received a standing ovation. The remaining spellers got eight in a row before Arvind missed on "Jugendstil," which he initially and hilariously pronounced "You could steal." He also got a standing ovation and gave the crowd a salute. Everyone stood again for Joanna when she missed "galoubet."

The two left standing were Sukanya and Laura. "Tired yet?" Laura asked the judges at one point.

But Sukanya couldn't be beat. She said she knew every word that was given to her -- never having to guess -- the result of her months of going through the dictionary twice from start to finish.

One of the new twists at this year's bee: Some semifinalists got to see ESPN's feature profiles of themselves on a big screen while they were airing on television. It might have seemed like a distraction, but it actually served to ease the tension. Grace Remmer of St. Augustine, Fla., giggled during the semifinals as she watched herself enjoying Disney World -- then calmed down and approached the microphone, where she correctly spelled "anaphylaxis."

The bee continued to exhibit a sense of humor in the sentences used by pronouncer Jacques Bailly. He used a "set of prison bars for the name Bernie Madoff" in his example for "brachygraphy" in the semifinals and later made a reference to the "The Jeffersons," a TV sitcom that went off the air some 10 years before the oldest of the spellers was born. In the finals there was the ice breaker: "The spellers' exsufflation at spelling the word correctly blew people's hair back in the front row."

The week began with 275 spellers. A written test Tuesday and two oral rounds Wednesday reduced the field for the semifinals.

The bee began the finals by remembering its first two champions. With Jeopardy uber-champion Ken Jennings and eight former winners in the house, the bee paid tribute to Frank Neuhauser and Pauline Bell, who both died in their 90s recently. Neuhauser won in 1925 with the word "gladiolus" and Bell won in 1926 with the "cerise," so bee officials placed an arrangement of cerise-colored gladioli at the base of the trophy pedestal onstage.

Joseph White can be reached at http://twitter.com/JGWhiteAP