The Gitmo no one talks about

Not only has Obama not closed Guantanamo, he has also vastly expanded a similar prison in Afghanistan 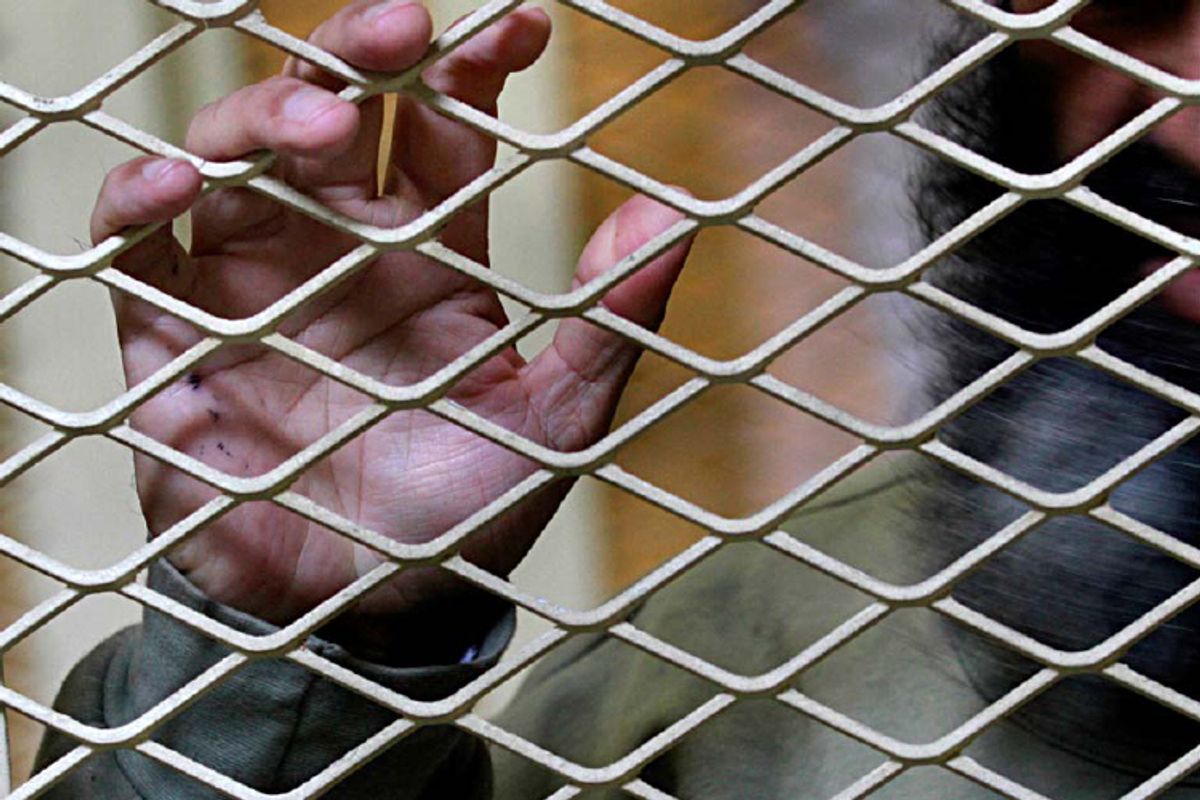 President Obama has presided over a threefold increase in the number of detainees being held at the controversial military detention center at Bagram Air Base, the Afghan cousin of the notorious prison at the Guantanamo Bay Naval Base in Cuba. It's the latest piece of news that almost certainly would be getting more attention -- especially from Democrats -- if George W. Bush were still president.

There are currently more than 1,700 detainees at Bagram, up from over 600 at the end of the Bush administration.

The situation at Bagram, especially the legal process that determines whether detainees are released, is the subject of a new report by Human Rights First. It finds that the current system of hearings for detainees "falls short of the requirements of international law" because they are not given "an adequate opportunity to defend themselves against charges that they are collaborating with insurgents and present a threat to U.S. forces." Human Rights First also argues that cases of unjustified imprisonment are damaging the broader war effort by undermining Afghans' trust in the military

I spoke to the author of the report, Daphne Eviatar, a senior associate in the law and security program at Human Rights First who traveled to Bagram to observe the situation first-hand. The following transcript of our conversation has been edited for length and clarity.

So to start with the basics, what is Bagram and what is its purpose?

It's a U.S. military detention center in Afghanistan that, like the Guantanamo detention center in Cuba, is on a military base. People who are sent there now are being picked up in Afghanistan. When it was first opened in 2001, there were some detainees brought in from other countries as well. The military has said that stopped in recent years. By the end of the Bush administration, there were about 600 or 650 detainees being held there. There are now more than 1,700.

What do we know about who the detainees are and why they were sent to Bagram?

We know that these are people who have been captured by the U.S. military during the war in Afghanistan or during the broader war on terror. The people who have been sent there recently were largely picked up during so-called night raids. The military will go into villages where they believe there are Taliban and raid a house. They take all the men out, and put the women and children in a separate area. If the soldiers find weapons when they search the house, the men are likely to be detained, and they may end up being sent from the village to Bagram. Some of those people end up being held at Bagram for years.

What legal status do the detainees at Bagram have? Are they prisoners of war?

The U.S. doesn't call any of the prisoners we keep in the context of the war on terror -- including Afghanistan -- "prisoners of war." They're called "unprivileged belligerents" which means that they don't have POW status. That's because we're at war with organizations like the Taliban or al-Qaida rather than a country or official government. But these detainees are supposedly being held under the rules of armed conflict.

What does this mean in practice about what sort of legal process they face and what rights these detainees have?

It depends who you ask. There are no laws under the rules of war governing how you treat detainees in this kind of armed conflict. So the position of most other civilized nations, most European commissions and human rights bodies is that international human rights laws should apply. The U.S. government says that those laws don't apply beyond its own borders, and therefore no laws apply.

Early on at Bagram, there were terrible abuses. There were reports of people being killed in custody and tortured. We believe that is not happening anymore. There is still something called the black jail at Bagram, what the government calls a "screening facility." It's called the black jail because there are no windows and no natural light, and no one knows what time of day it is. The conditions there are much worse than at the main prison. People who have been at the black jail complain of being strip-searched in humiliating ways, being subjected to extreme cold temperatures, lights on 24 hours a day, and not having a mattress. But still nothing as bad as the kind of torture that was reported early on.

You went to Afghanistan and attended some of the hearings for Bagram detainees. How does this all work and what did you find?

They are supposed to get a hearing on their detention after 60 days and then at six months and every six months after. The hearings sound good on paper but then when you actually attend them -- I hate to use the cliché -- it's Kafkaesque. They're not allowed to see much of the evidence against them because it's classified. So a military person will stand up and read the charges -- say that the detainee was found to be an IED maker. And the accused will say, "Well what is the evidence against me?" And the military won't produce it because it's classified. The accused does not get a lawyer; they get what's called a personal representative. That's a field-grade soldier who is assigned to represent a detainee -- but they have no legal training beyond a 35-hour course. Many former detainees told me they did not trust their representatives, who are uniformed soldiers. And at least in the public sessions, we did not see the representatives ever challenge evidence. There are also classified sessions, where we of course don't know what happens.

So what are the biggest problems at Bagram in your view?

The biggest is that it's not at all clear the military is getting the right people. They often depend on tips from unnamed informants who are unreliable or have a personal ax to grind. I wrote in the report about one man who was in detention for a year and a half before he was able to get his hands on court documents showing that he was in a dispute with another man who he thought might be his accuser. When he brought those documents into one of the hearings, he was finally released -- the implication being that the military realized its informant was giving bad information to promote his own interests.

Are there specific changes you'd like to see at Bagram?

The two biggest are to improve the representation for detainees and to reduce the reliance on classified evidence. Because really those things amount to detainees not being able to defend themselves. Even if the personal representative has access to the classified evidence, he can't tell his client what it is. So you really need someone with legal training who understands how to work within those limitations and to fight to declassify evidence.

And there are two reasons to do this. One is fairness and due process. The other is that eventually these detainees will be released and go back to their villages. You don't want these men going back and saying, "I was imprisoned by the U.S. military for three years for no reason." That's a good way to breed animosity among the local population.