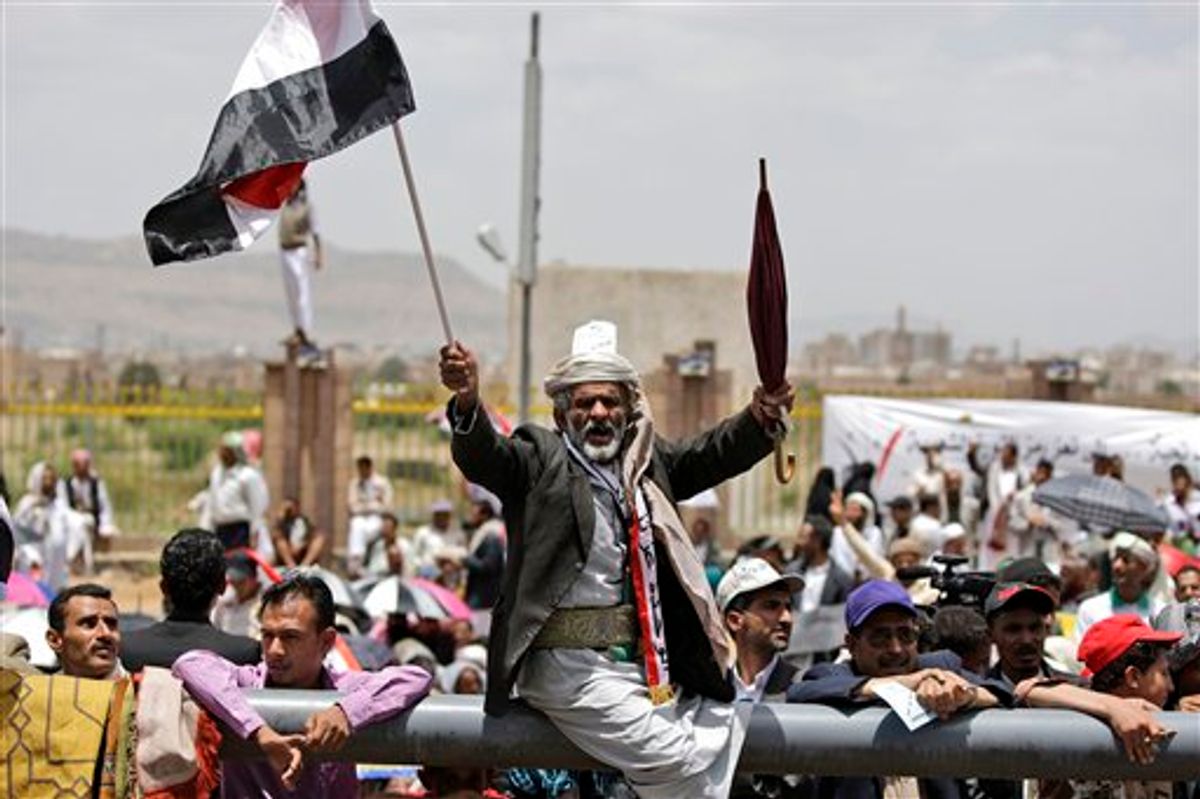 Five top members of the government were sent to Saudi Arabia for treatment of wounds they suffered in a rebel rocket attack on the presidential palace, the official government news agency reported Saturday. President Ali Abdullah Saleh was slightly injured.

Hisham Sharaf, minister of trade and industry, said he met with Saleh Friday night and that the president remained defiant in the face of escalating violence. Months of peaceful demonstrations to oust the regime have become a raging military conflict in the capital and elsewhere.

"He was in very high morale. The strike that doesn't break you makes you stronger. The strike made him more adamant that he won't handover the country until he is sure it will be safe and clear of militias," Sharaf said. He said he spoke with Saleh at a military hospital Friday night where he was treated for minor wounds before returning to the presidential palace.

But a senior official in the president's office said Saleh remains in the military hospital. The official spoke on condition of anonymity because he was not authorized to speak to the press.

Presidential spokesman Ahmed al-Sufi declined to comment. He accused the United States of orchestrating the attack on Saleh, saying all signs pointed to American involvement "because of the precision and the timing."

A military official said, however, investigators were trying to determine if there was a security breach in the palace guard.

Tribal and medical officials said, meanwhile, that 10 tribesmen were killed and 35 injured in overnight fighting in the Hassaba neighborhood, headquarters of opposition Sheik Sadeq al-Ahmar. A tribal leader said street fighting lasted until dawn. Many of the compound's buildings and surrounding houses have already been heavily damaged by days of bombardment.

Government and rebel forces exchanged rocket fire, damaging a contested police station. The rockets rained down on streets housing government buildings that had been taken over by tribesmen.

Since violence erupted in the city on May 23, residents have been hiding in basements as the two sides fight for control of government ministries and hammer one another in artillery duels and gunbattles, rattling neighborhoods and sending palls of smoke over the city.

Seven guards were killed in the rebel strike on the mosque in the presidential palace compound where Saleh and the other officials were at prayer. The news agency said the prime minister, a deputy prime minister, the president's top security adviser, and the two heads of parliament were sent to Saudi Arabia by air in the early hours Saturday. The security officer reportedly was in serious condition.

As for Saleh's injuries, Deputy Information Minister Abdu al-Janadi spoke of only "scratches to his face." But there were indications the injuries may have been more severe. Saleh, in his late 60s, was taken to a Defense Ministry hospital, while officials promised repeatedly that he would soon appear in public. But by late Saturday morning, state television had aired only an audio message from the president, with an old still photo.

"If you are well, I am well," Saleh said in the brief message, addressing Yemenis. He spoke in a labored voice, his breathing at times heavy. He blamed the rocket attack on "this armed gang of outlaws," referring to the tribal fighters, and called on "all sons of the military around the country to confront" them.

The bold assault directly on the president is likely to heighten what has been an increasingly brutal fight between Saleh's forces and the heavily armed tribesmen loyal to al-Ahmar.

The bloodshed comes as nearly four months of protests and international diplomacy have failed to oust Yemen's leader of 33 years.

The White House called on all sides to stop the fighting, which has killed more than 160 people.

"Violence cannot resolve the issues that confront Yemen, and today's events cannot be a justification for a new round of fighting," White House Press Secretary Jay Carney said in a statement.

President Barack Obama's Homeland Security and Counterterrorism adviser, John Brennan, discussed the crisis in Yemen with officials in Saudi Arabia and the United Arab Emirates during a three-day visit to the Gulf that ended Friday. He vowed to work with Yemen's powerful neighbors to stop the violence.

Washington fears the chaos will undermine the Yemen government's U.S.-backed campaign against al-Qaida's branch in the country, which has attempted a number of attacks against the United States. Saleh has been a crucial U.S. ally in the anti-terror fight, but Washington is now trying to negotiate a stable exit for him.

Germany said Saturday it had ordered the immediate closure of its embassy in Yemen "because of current developments."

"The embassy team that is still on the ground will leave the country as soon as it is possible and safe," the foreign ministry said in a statement.

Inspired by uprisings in Egypt and Tunisia, protesters have been trying unsuccessfully since February to oust Saleh with a wave of peaceful protests that have brought out hundreds of thousands daily in Sanaa and other cities.

Now the crisis has transformed into a power struggle between two of Yemen's most powerful families -- Saleh's, which dominates the security forces, and the al-Ahmar clan, which leads Yemen's strongest tribal confederation, known as the Hashid. The confederation is grouped around 10 tribes across the north.

Al-Ahmar announced the Hashid's support for the protest movement in March, and his fighters adhered to the movement's nonviolence policy. But last week, Saleh's forces moved against al-Ahmar's fortress-like residence in Sanaa, and the tribe's fighters rose up in fury.

Friday's attack was the first time the tribesmen have directly targeted the president. At least three rockets hit in and around Saleh's palace compound in Friday's strike, one of them hitting the front of the mosque, where he and his officials were lined up in prayer, according to a presidential statement.

The al-Ahmars were once uneasy allies of Saleh, and their Hashid confederation was key to his hold on power. But Sadeq al-Ahmar and his nine brothers have grown increasingly resentful of Saleh's policy of elevating his sons, nephews and other relatives to dominate regime positions, particularly in the security forces.

Their fight comes as Saleh's forces continue to crack down on the tens of thousands of demonstrators still massing daily in a central square of Sanaa and in other cities.

Troops fired on protesters Friday in the city of Taiz, south of the capital, wounding two. A Defense Ministry statement said four soldiers were killed and 26 others injured in clashes there with gunmen it said were from the opposition and Islamist groups.