How to drink, the Hemingway way

The self-destructive drinker knew what he liked when it came to alcohol. Here are some of his hard-learned tips 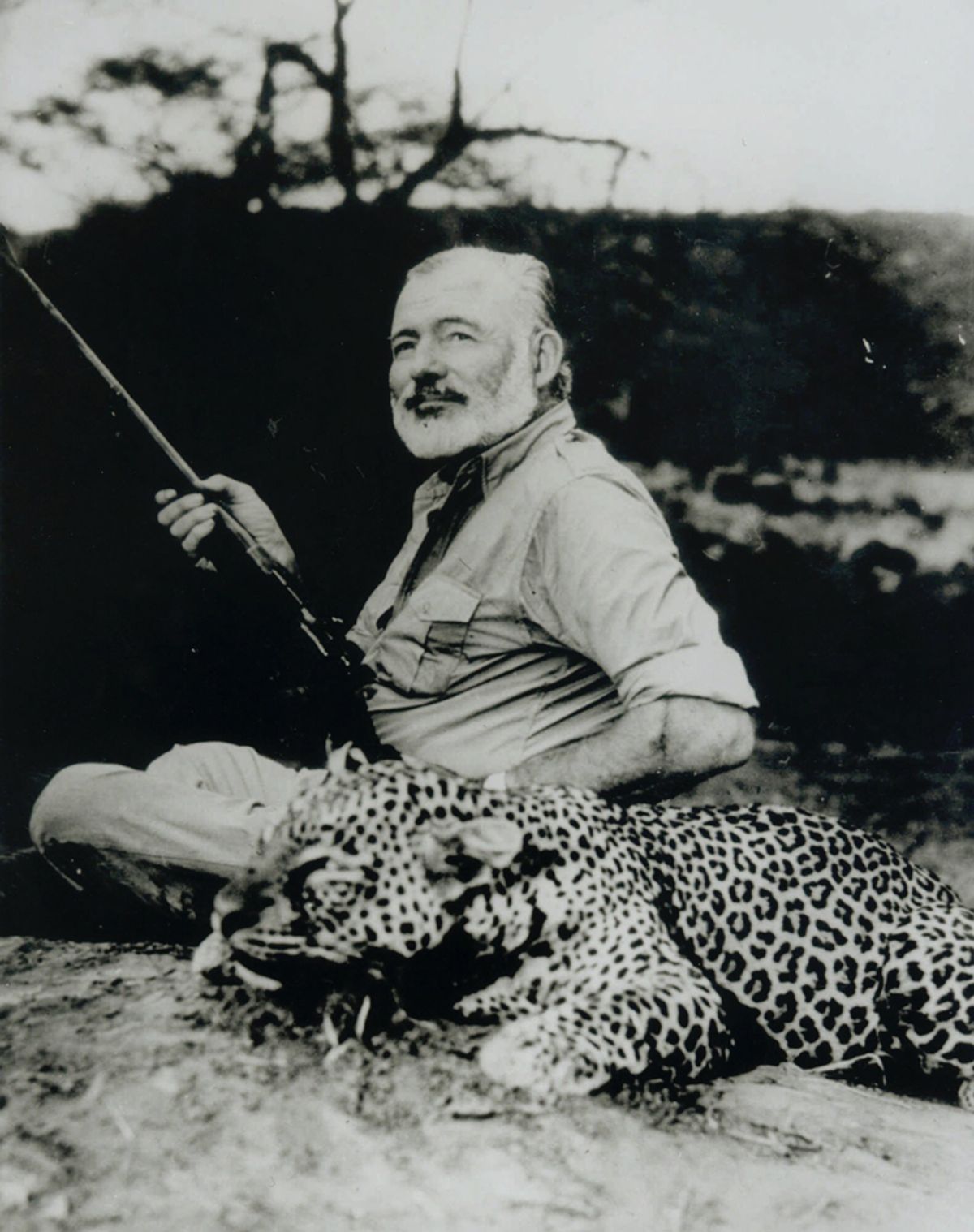 In this age of Mike's Hard Lemonade, Smirnoff Ice, Bacardi Breezers (flavors include pineapple, watermelon, mango, coconut, raspberry, blueberry, and probably estrogen), and other alco-pops marketed to prepubescent girls, it's easy to wonder: why should I drink throat-burning hard liquor when I can instead sip five-proof carbonated fruit juice? Or: why should I put hair on my balls when I'm just going to manscape them anyway?

But didn't Hemingway love daiquiris? you ask. Didn't Hemingway invent the mojito? Yes, Hemingway loved and invented lots of things -- such as freedom and gravity -- but only Richard Nixon could go to Red China. We must painstakingly follow his example (Hemingway's, not Nixon's) which means earning sufficient masculine credibility to experiment with unmanly pursuits, and thereby make them manly.

Amateurs, unlike aficionados, can't afford to break the rules, because (as Hemingway told the Paris Review) "what amateurs call a style is usually only the unavoidable awkwardnesses in first trying." You may consume a piña colada garnished with maraschino cherries and caramelized strawberries only after surviving trench warfare, the Running of the Bulls, two African safaris, four wives, and thousands upon thousands of piña coladas.

Men don't get loaded for the vitamin C. We get loaded because we have demons. We are dark, broody, and mysterious; we possess inexplicable desires and tempestuous temperaments. We can dull our torment with liquid intoxicants -- as the amputee endures his wretched condition with morphine -- but we cannot erase our misery. Nor would we want to do so, because "to suffer like a man" (like Santiago in "The Old Man and the Sea") makes us men.

Alcohol isn't about expressing this torment. The whole point is burying it deeper, which is why nobody likes a sad drunk. But some inconsiderate people -- specifically, people with vaginas -- cannot help themselves; they have an ounce of schnapps and then weep about their latest breakup (with yet another soul mate) or their backstabbing girl friends (those bitches) or their dead pet (more like toy) or their horrible daddy (the molester).

Whining is for women; whiskey is for men. The only shoulder a man cries on is marinated beef chuck, and the only tears he cries are tears of joy. "You don't want to mix emotions up with a wine," Papa implored in "The Sun Also Rises." "You lose the taste."

The only time Hemingway cried over alcohol: When Congress made it illegal during Prohibition. But he pulled himself together, as a man does always, and traveled to Paris, as a man does seldom. There Papa committed to a life of glorious, full-throttle chemical dependence alongside "The Great Gatsby" author F. Scott Fitzgerald, who said, "First you take a drink, then the drink takes a drink, then the drink takes you." In Fitzgerald's case, the drink took ten thousand drinks and then left him dead in the gutter.

During this time Hemingway composed "The Sun Also Rises," a novel about self-loathing, castrated Jake Barnes, who impresses women with his massive booze consumption, since he can't impress them with a massive anything else. (Original title: "The Junk Never Rises.") The book's characters drank more than a hundred and fifty types of alcohol on nearly eight hundred occasions, just like their creator before lunch. A decade and a half later, at the ripe old age of forty, Hemingway -- who wrote what he knew -- suffered from kidney and liver problems, hypertension, cramps, diabetes, insomnia, bloody urine, and (worst of all) erectile dysfunction. Life penis imitates art penis.

Doctors begged him to cut back from his average of three bottles per day. Hemingway agreed to compromise, reducing his intake to a detox diet of absinthe, whiskey, vodka, wine, gin, tequila, champagne, and beer for breakfast, according to numerous biographies. (You haven't tasted Cinnamon Toast Crunch until you've doused it with Guinness Extra Stout.) Papa even refused to shower, revealed his friend A.E. Hotchner in the memoir "Papa Hemingway," instead demanding "alcohol sponge-baths."

These physical and psychological maladies suggest that imbibing is a bad thing -- with negative consequences -- but Hemingway told us in "The Sun Also Rises": "It seemed out of place to think of consequences during the fiesta." Alcohol takes years off your life, but he told us in "A Farewell to Arms," it "always makes you happy," like a well-marbled steak drenched with blood and butter. (And with bourbon.)

A man works up quite a thirst while massacring ferocious beasts such as lions, tigers, and chipmunks with his personal arsenal of firearms and traps and machetes and blowtorches. On safari Hemingway often "drank a whiskey … to take the edge off so I would not be nervous" ("Green Hills of Africa") and got "too drunk to shoot straight." Like Dick Cheney, he probably scared away more hunting partners than wives.

This strategy was less successful on his boat, the Pilar, when -- drunkenly trying to kill a shark—he accidentally shot himself in both legs. (As opposed to purposefully in the face.)

Nevertheless, Hemingway advised, "you ought to taste [beer] on a hot day when you have worked a big marlin fast because there were sharks after him." But you ought to use liquor, not beer, to sterilize that gaping wound.

In WWI Hemingway always kept a bottle hidden under his bed for comfort. And when the Allies retook Paris during WWII, Papa's first priority was "liberating" the bar at the Hôtel Ritz. He miraculously even convinced starstruck U.S. Navy officers to stock the Pilar with bazookas, grenades, and machine guns to hunt Nazi submarines.

But the clandestine missions of Captain Hemingway devolved into combat-free "fishing trips" during which "grenades were hurled into the sea in drunken sport," as biographer Kenneth Lynn documented. His third wife left him because of this behavior, despite his epic defense: "Honey, drinking is war." Ironically, divorce court was the most vicious war zone of all.

You could pay a doctor to diagnose and treat your disorders, but alcohol "cures everything" ("For Whom the Bell Tolls"), especially alcoholism's withdrawal symptoms. Besides, a physician will order you to cut your consumption and take fancy-schmancy medicine instead. The greedy bastard just wants to make you dependent on his potions, unlike the benevolent angels of the adult beverage industry. "You're not supposed to drink," Hemingway scoffed in "True at First Light," "but I always did and I'm still here."

What kind of papa was Papa? According to Lynn, the kind who once told his puking ten-year-old son, "I'll fix you a Bloody Mary -- you've just got a hangover." But is triple-distilled vodka really unhealthier than McDonald's Happy Meals, which millions of deadbeat parents shovel down their morbidly obese tykes' gullets? Alas, vodka does not come with a collectible gizmo, unless a transplanted liver qualifies as a disposable plaything.

Unlike his prepubescent son, Hemingway rarely experienced hangovers, because "any man who drinks a great deal needs to eat." ("True at First Light") Load up on heavy carbohydrates: pizza, pasta, and "pretzels for … the good way they made the beer taste." ("A Farewell to Arms") Another good source of carbohydrates: beer.

Puritanical scolds object to "the obvious moral wrongness of the bullfight, just as people could refuse to drink wine which they might enjoy ..." ("Death in the Afternoon") But two wrongs obviously make a right. Whenever in Spain, Hemingway got loaded and hit the arenas, where heckling was tolerated because ("Death in the Afternoon" again) "bulls pay little attention to a drunk."

Men love solitude. We don't need conversation when a "bottle of wine was good company" and "[i]t was pleasant to be … drinking alone." ("The Sun Also Rises") An isolated cabin in the forest is the perfect home for us.

Unfortunately humans are social animals. We must communicate if we don't wish to go utterly off-the-rails insane. Alcohol can help with this tedious chore: martinis will make you "feel civilized" ("A Farewell to Arms") and will make the people you hate seem tolerable, because "[a]n intelligent man is sometimes forced to be drunk to spend time with fools." (Hotchner's "The Good Life According to Hemingway")

Booze improves every aspect of life, but it's going to cost you. If you piss away your fortune -- likely for a professional novelist instead of, say, an employed person -- find a wealthy woman (like Papa's first wife) to serve as your benefactor. Naturally you'll need to convince her that you're worth more in social status than she's worth in money, and you'll also need to convince her that you're not a "boozer and whorehound" ("A Farewell to Arms") who achieves "nightly alcoholic triumph." ("The Short Stories")

"To drink is nothing," Hemingway proclaimed in "For Whom the Bell Tolls." "It is to be drunk that is important."

This article is excerpted with permission from "The Heming Way"

Marty Beckerman has written for Esquire, Playboy, Salon, Discover, Gawker, AOL, the Daily Beast, and every other worthwhile publication of our time. His literary masterpieces include "Generation S.L.U.T." (MTV Books / Simon & Schuster) and "Dumbocracy: Adventures with the Loony Left, the Rabid Right, and Other American Idiots" (The Disinformation Company).