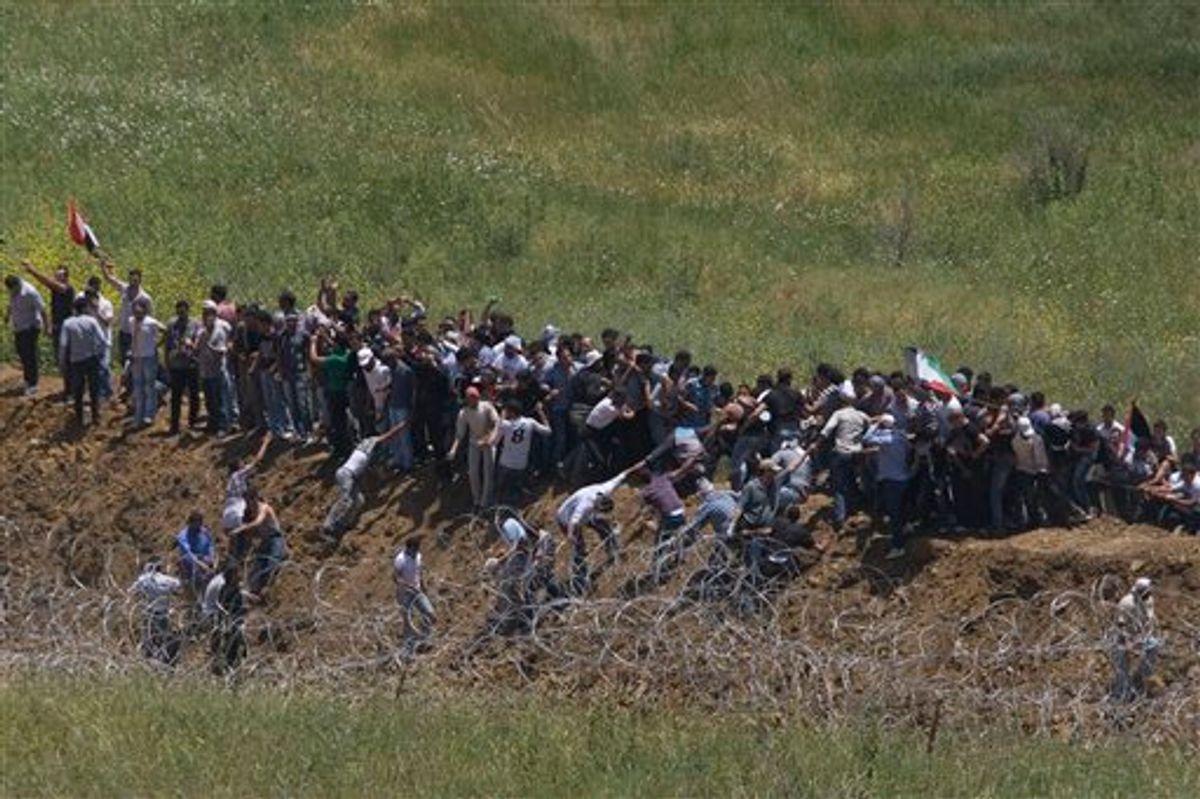 Pro Palestinians protesters try to break a fence along the border between Israel and Syria near the village of Majdal Shams in the Golan Heights, Sunday, June 5, 2011 . Israeli troops opened fire across the Syrian frontier on Sunday to disperse hundreds of pro-Palestinian protesters who stormed the border of the Israeli-controlled Golan Heights, reportedly killing four people in unrest marking the anniversary of the Arab defeat in the 1967 Mideast war. (AP Photo/Ariel Schalit) (AP)
--

Israeli troops opened fire Sunday at a crowd of pro-Palestinian protesters who tried to break into the Israeli-controlled Golan Heights from neighboring Syria, killing as many as six people and wounding dozens in a burst of violence marking the Arab defeat in the 1967 Mideast war.

Israel angrily accused the Syrian regime of orchestrating the violence -- the second border clash in less than a month -- to deflect attention from its bloody crackdown on a popular uprising at home.

Israel had promised to prevent a repeat of last month's deadly protests, in which hundreds of people broke through a border fence, entered the Golan and clashed with Israeli forces. Thousands of troops were mobilized in anticipation of possible unrest.

"Unfortunately, extremist forces around us are trying today to breach our borders and threaten our communities and our citizens. We will not let them do that," Prime Minister Benjamin Netanyahu told his Cabinet. He said security forces had been ordered to show "maximum restraint."

Despite Israel's warnings, hundreds of demonstrators -- a mix of Palestinians and their Syrian supporters -- passed by Syrian and U.N. outposts early Sunday and marched to the barbed-wire lined trench the Israeli military dug along the border after last month's unrest. Protesters waved Palestinian flags and threw rocks and trash over the fence.

As the crowd reached the border, soldiers shouted warnings through megaphones. "Anybody who gets close to the fence is endangering his life," they said.

When the demonstrators pushed forward, troops opened fire, sending crowds running in panic. Several wounded people were taken away by demonstrators, but dozens more continued heading toward the trench. Those evacuating casualties shouted "shahid," or "martyr."

Protesters, most of them young men, eventually managed to cut through coils of barbed wire marking the frontier, entering a buffer zone and crawling toward a second fence guarded by Israeli troops. Every so often, they evacuated a dead or wounded protester, and more men raced in to take their place.

Dr. Ali Kanaan, director of the Quneitra hospital, said five people had been killed and 94 wounded, among them six in critical condition.

"We were trying to cut the barbed wire when the Israeli soldiers began shooting directly at us," Ghayath Awad, a 29-year-old Palestinian who had been shot in the waist, told the AP at the hospital.

State-run Syrian TV reported six dead, including a 12-year-old boy, and 15 wounded. There was no immediate confirmation of those reports.

Mohammed Hasan, a 16-year old student, was wounded in both feet. "We want on this occasion to remind America and the whole world that we have a right to return to our country," he said.

The recent protests are designed to draw attention to the plight of Palestinian refugees who fled or were expelled from their homes during Israel's war of independence in 1948. The original refugees, and their descendants, now number several million, and they demand "the right to return" to the families' former properties.

Israel says a return of these people would spell the end of the country as a Jewish state, and says they should be resettled in a future Palestinian state alongside Israel.

Around half a million Palestinian refugees live across 13 camps in Syria, a country with a population of 23 million. Palestinians are allowed to work and study in government and private schools, but they do not have citizenship and cannot vote.

The Israeli military put the blame on the Syrian regime, which has killed more than 1,200 citizens during three months of demonstrations against the Alawite-dominated government of President Bashar Assad. The Syrian military, which tightly controls access to the border, did not keep the protesters from reaching the fence.

"This is an attempt to divert international attention from the bloodbath going on in Syria," said Lt. Col. Avital Leibovich, an Israeli military spokeswoman.

"In the end, we are guarding our border," she said. "I wish they had obeyed our verbal warnings, but they chose instead to clash with the soldiers."

The Israeli military said troops fired warning shots into the air after people started approaching the border fence, then issued verbal warnings to protesters to stay away. After some of the protesters reached the fence, soldiers opened fire at their legs, the military said.

Residents of Majdal Shams, ethnic Druse who remain Syrian citizens while living on the Israeli side of the frontier, watched the protest from rooftops, booing each time the military tried to speak and cheering on the protesters.

At one point, several dozen Syrian protesters stopped along a hillside to pray, bowing to the ground in unison. Later, protesters split into several groups, trying to throw off the army as they tried to cut through the barbed-wire trench. A burning tire was thrown into the trench, sending a plume of smoke into the air.

The demonstrators moved toward the frontier even after more than a dozen people were killed during similar attempts along the Syrian and Lebanese frontiers on May 15, the day that Arabs mourn the establishment of Israel.

Sunday's protest marked 44 years since the 1967 Mideast war erupted. That war, a humiliating defeat for Arab states, saw Israel conquer the Sinai Peninsula and Gaza Strip from Egypt, the Golan Heights from Syria, and the West Bank and east Jerusalem from Jordan, all in six days.

Israel has withdrawn from the Sinai and Gaza, but remains in control of the other areas. Israel annexed the Golan in 1981 in a move that was never recognized internationally.

Things were relatively calm on Israel's other borders on Sunday.

About 400 Gazans hoisting Palestinian flags and posters gathered near the main passenger crossing into Israel, but Hamas riot police prevented them from marching toward the crossing.

At the West Bank's main crossing into Jerusalem, several hundred Palestinian young people tried to approach the checkpoint. They threw stones at Israeli forces, who responded with tear gas and rubber bullets. No injuries were reported.