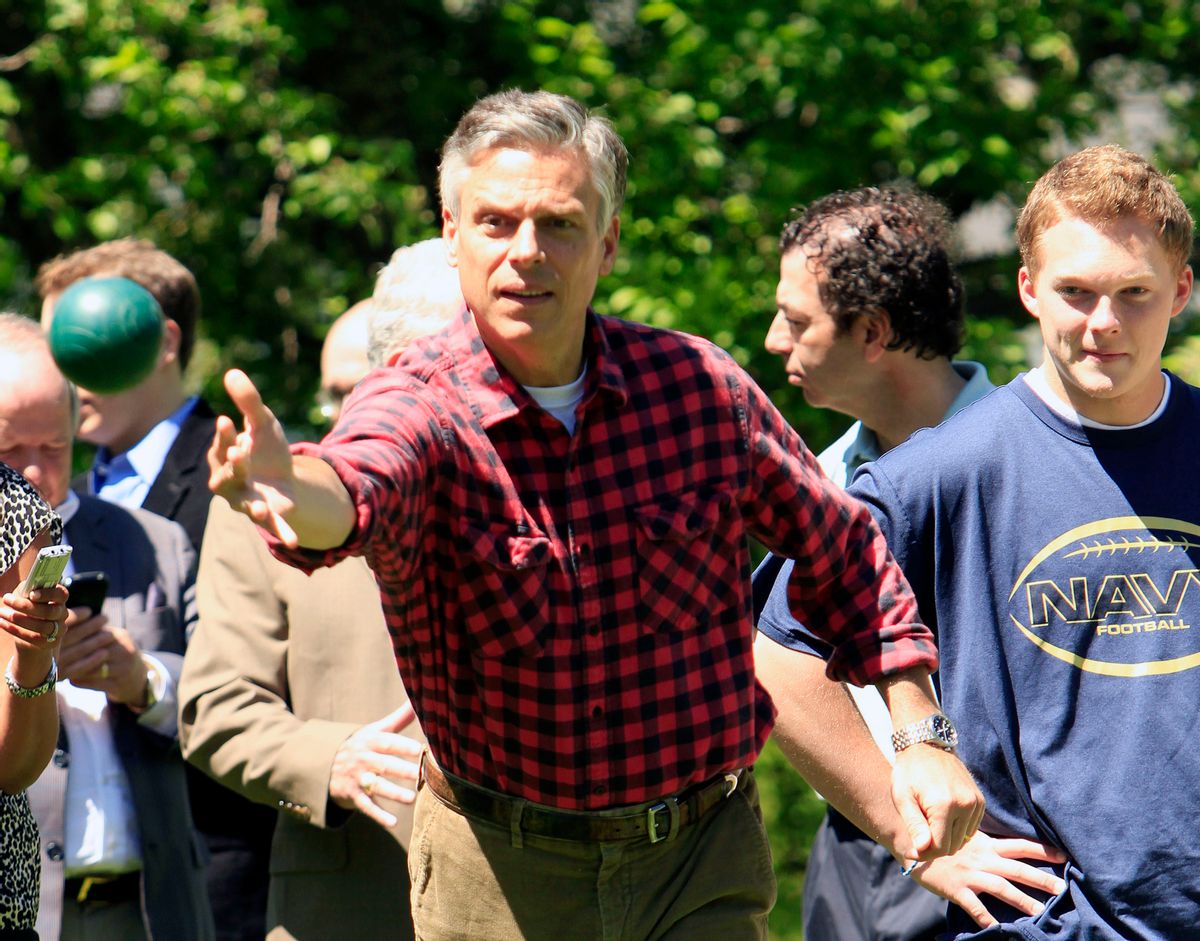 Jon Huntsman, the former Utah governor and Obama-appointed ambassador to China who is preparing to enter the Republican presidential race, has apparently decided that competing in Iowa would be a wasted exercise. Instead, he said over the weekend, he plans to focus his time and energy on New Hampshire, South Carolina and Florida.

The logic here is understandable. Huntsman is quickly emerging as the media's favorite candidate, the designated "reasonable" Republican in a pack full of panderers and unelectable wing-nuts. This represents a double-edged sword for him. Given his low name recognition, Huntsman badly needs any media attention he can get. But if he's seen as the preferred choice of non-conservative reporters and pundits, he risks earning the dreaded "RINO" tag from opinion-shapers on the right. And when it comes to Iowa, where the caucus electorate is smaller and more rigidly ideological than in other states, there just isn't much room for RINOs. Better to take a pass altogether, Huntsman seems to be thinking, than invest serious time and money only to suffer a drubbing.

In this sense, he's mimicking the strategy that John McCain used back in 2000, when the Arizona senator pulled out of Iowa early and focused his efforts on New Hampshire. In a way, McCain's strategy worked. Against limited competition (Steve Forbes was his main rival), George W. Bush won Iowa easily, then was ambushed in New Hampshire by McCain, whose message and style fit perfectly with the state's independent spirit. McCain crushed Bush by a stunning 19-point margin and became a national sensation overnight, raising millions of dollars and surging in national polls.

But then the limits of McCain's strategy became clear. Bush was the clear choice of the GOP's elites -- elected officials, activists, interest group leaders, opinion-shaping commentators -- and it was their hostility that had initially forced McCain to back out of Iowa, cultivate the media, and rely on independent voters. In his one-on-one race with Bush after New Hampshire, GOP elites portrayed McCain as a disloyal Republican who was being propped up by "mischievous" independent and Democratic voters. Bush regained control of the campaign and won the nomination with relative ease.

McCain's 2000 experience may be the best-case scenario for a candidate who skips Iowa, and Huntsman will be lucky if he can even begin to approach that level of success. For one thing, McCain came to the 2000 race with more built-in support. He'd been in the Senate for 14 years and had distinguished himself as a "reformer" through his campaign finance activism in the late '90s. His P.O.W. story was also well-known to many Republicans. Plus, McCain benefited from a vacuum in Iowa, where his departure left Bush to beat up weak competition (Forbes, Gary Bauer, Alan Keyes and Orrin Hatch). The only real threat to McCain getting his one-on-one race with Bush in New Hampshire was Forbes somehow breaking out and knocking off Bush in Iowa, and it was clear by the fall of 1999 that this wasn't going to happen. The political world spent months anticipating the Bush-McCain New Hampshire showdown.

There are more variables in Iowa right now. There's no clear front-runner, but Mitt Romney, Tim Pawlenty and (if he runs) Rick Perry all start out with at least a chance of emerging as the victor. There's also the possibility that someone like Michele Bachmann or Herman Cain could win the state or fare surprisingly well. There's a chance that whatever headway Huntsman makes in New Hampshire between now and January will all be washed away when the Iowa results come in and a pecking order is established. There's also a chance that Huntsman will make no headway at all in New Hampshire.

Still, in a way, you can't blame him for trying this approach. Between Iowa and New Hampshire, the latter is probably a much better fit for him and for his message right now. If he can gain some early traction there, survive the post-Iowa shakeup, and fare well in New Hampshire, Huntsman will have improved his standing on the national political stage significantly -- if not for 2012 then maybe for the next time around.