Attack punctuates one of the deadliest days for U.S. troops in the country in two years 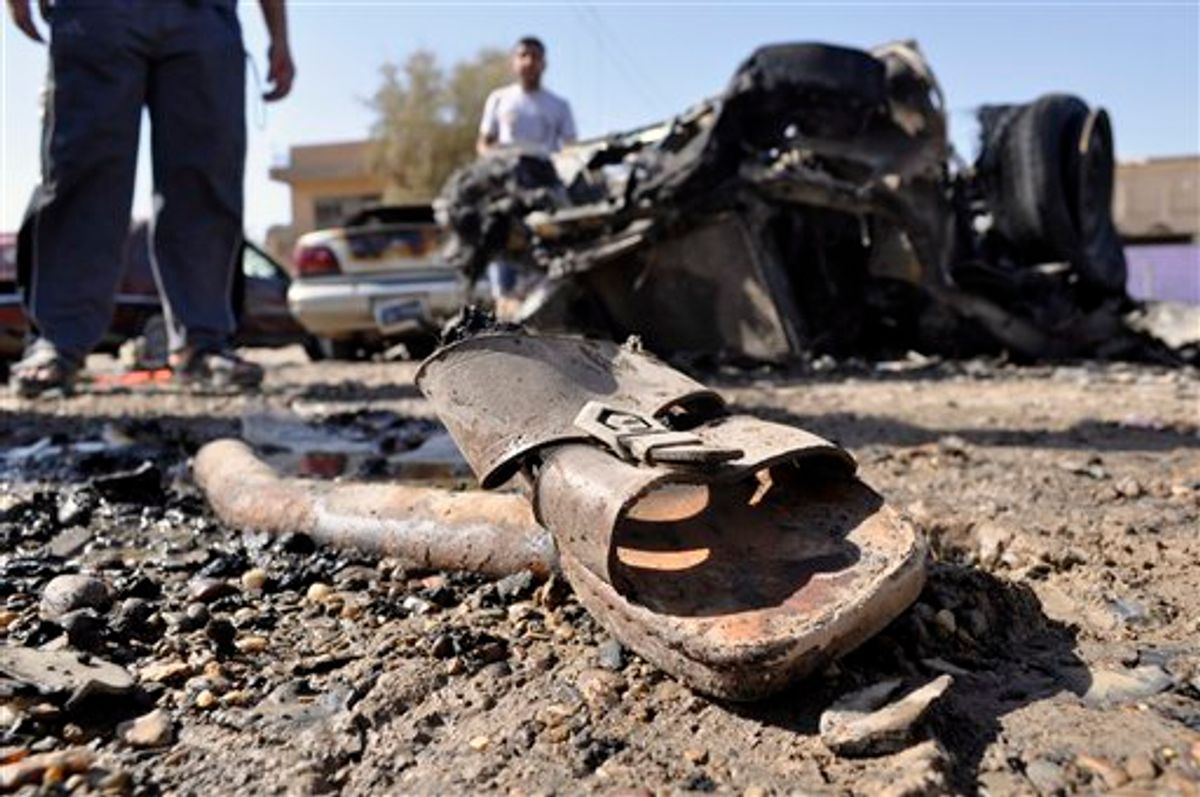 A discarded sandal is seen amid debris and destroyed vehicles the morning after four blasts killed several people in Ramadi, 70 miles (115 kilometers) west of Baghdad, Iraq, Friday, June 3, 2011. The blasts in what was the heartland of the al-Qaida-led insurgency are a reminder of the danger still facing Iraq, as it prepares for the departure of the remaining U.S. troops by the end of this year.(AP Photo) (AP)
--

Two Iraqi security officials say a barrage of at least three rockets hit an Iraqi base in eastern Baghdad on Monday morning and killed the five American troops.

Earlier, the U.S. military said in a brief statement that five troops were killed but gave no additional details about where the incident occurred or how they died.

The Iraqi officials say the Americans were staying on the Iraqi base as advisers and the rockets hit near their living quarters.

The Iraqi officials spoke on condition of anonymity because they were not authorized to speak to the media.

BAGHDAD (AP) -- Five American troops were killed Monday in central Iraq, U.S. officials said -- the single largest loss of life for the American military in Iraq in the past two years.

The military said in a brief statement that the five were killed Monday, giving no additional details about where the incident occurred or how they died.

The incident was under investigation and the names of the deceased were being withheld pending notification of the next of kin, the military said.

The deaths raised to 4,459 the number of American service members who have died in Iraq, according to an Associated Press count.

The U.S. currently has roughly 46,000 U.S. troops in Iraq, down from a one-time high of roughly 170,000. The American military officially ended its combat operations in Iraq last August and reduced its forces to less than 50,000 troops.

The remaining forces are focused on training and assisting Iraqi security personnel, and are not supposed to be actively engaged in combat operations. However, American forces still come under almost daily attack by rockets and mortars in their bases and get shot at and targeted by roadside bombs when they move outside of their bases.