Six things to know about "The Undefeated"

A former Bushie got a sneak peak over the weekend and offered to tell us all about it. We took him up on it 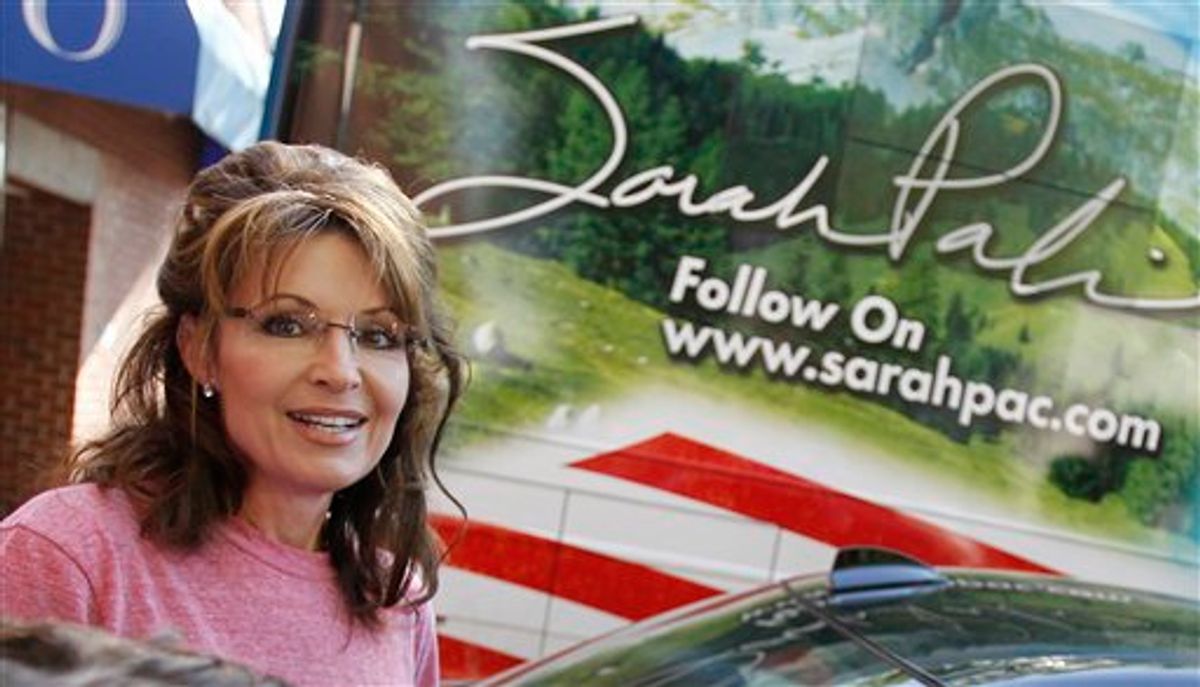 The long-awaited merger of Sarah Palin and Harvard University at last has taken place. This was the first takeaway from my advance viewing of the new (and uncritical) Palin documentary, "The Undefeated," the latest in a line of populist-oriented films by its likable director Stephen Bannon. Ironically, the anti-elitist Bannon not only worked on Wall Street in his early life, but graduated with honors from Harvard Business School. For some reason, I doubt most of his professors will be lining up for tickets.

"The Undefeated" is not the movie Palin critics would have longed for. There is not a single reference to Levi Johnston, not a glimpse (or even defense) of the infamous Katie Couric interview, no appearance by any serious critic of Palin’s gubernatorial record, and not a word about Paul Revere.  Nor, by the way, is the point ever made that the "undefeated" Palin was in fact defeated in the 2008 election. But the movie is earnest in offering those who are willing to take a second look at the beleaguered Alaskan. And, to his credit, Mr. Bannon, who spent $1 million on this film, does not hide his intentions. "I believe this is the leader we need," he said of Palin at the screening, perhaps unhelpfully adding that she recently had mispronounced his name.

So without further ado, my top takeaways from the film:

Matt Damon kicks sand in dead people’s faces. I am just getting comfortable in my chair when the screen suddenly fills with a montage of attacks on the former governor by Mr. Damon and about a dozen other celebrities (John Cleese calls her "a nice-looking parrot," David Letterman says she dresses like a "slutty flight attendant," I forgot what Rosie O’Donnell said, but whatever it was, she didn’t look good saying it). Then things take a truly vicious turn: Some nut paints a picture of Palin being crucified. Another idiot offers vulgarities about Palin and her newborn son, Trig. But that’s not the fun part. As the movie goes on, the attacks on Palin seamlessly segue into lions stalking and feasting on a defenseless zebra; an arrow protruding from the neck of a slain medieval archer; the most horrific car crash I’ve ever seen on film; a bridge (to nowhere?) collapsing; a man literally choking someone to death; a nuclear explosion; a volcano eruption; and, yes, sand being thrown onto the face of a nearly buried corpse. All that is missing is a depiction of Maureen Dowd taunting our dear Sarah while dancing the can-can with Osama bin Laden and setting the Constitution on fire.

Man, Alaska was a total mess. During most of the first hour, we are offered an education about pre-Palin Alaska and, folks, it ain’t pretty. Corrupt oil executives twirl their mustaches, legislators’ offices are raided every day by the Feds, cigar-chomping politicos in smoke-filled rooms rip off taxpayers. Specific Palin enemies -- like Sen. Lisa Murkowski and her father, the former governor -- are given the dreaded slow-motion treatment when they appear on-screen, as if their evil, corrupt ways impede them from normal movement. There is a service performed here, as it quickly became obvious why the state’s voters selected Palin in the first place. Everyone else in Alaska seems to have attended the Boss Hogg School of Good Government.

Believe it or not, Palin actually was a pretty good governor. Once upon a time, before Tina Fey, Katie Couric, "Saturday Night Live," the reality show, and her Twitter account, Sarah Palin was a political wonder: a mom who stood up -- and defeated – powerful members of her own party. Though a long time ago and in a galaxy far, far away, even the New York Times favorably noted that Palin "first rose to prominence as a whistle-blower uncovering ethical misconduct in state government."

"The Undefeated" deftly uses local news footage to document this early, now largely forgotten image of Palin (and, yes, she always talked like that). See Palin, apparently single-handedly, enact historic ethics reform, cut state spending, and work with Democrats and the detestable "lamestream media" to pass long-sought laws tackling the corrupt practices of Big Oil (Exxon’s publicist is not going to like this film). Palin’s legitimately earned reformer reputation helped her garner a sustained approval rating of more than 80 percent in her state.

As I watch this, I suddenly realize something: Whatever came to pass later, Palin’s short, 18-month stint in Juneau was never adeptly explained or exploited during her introduction to a national audience. The moral: The McCain campaign was an even bigger disaster than I already had suspected.

Nancy Reagan was not a consultant on this film. A chunk of the movie makes the risky move of equating Palin with the GOP’s golden-haloed Ronald Reagan. Comparisons to the Gipper of course are a cliché in the party these days, but there are a few surface-level similarities between the Californian and the Alaskan. Both were alternately feared and mocked by the GOP establishment, which, in both cases, was heavily populated by Bush cronies. Both had a charismatic effect on the right and a demonic effect on the left. Both were occasionally fact-challenged. Both saw themselves as conservatives fighting the entrenched interests of Washington. And both had cojones, unlike some other people that could be mentioned ...

John Boehner is missing some manparts -- and he's not the only one. The film offers an interesting medical hypothesis for why Washington’s Republican establishment is so dull, gutless and dreary. They are all "eunuchs." None, for example, has the manhood to defend Palin when she comes under attack or to accomplish much else for that matter. As this is said, the camera flashes not only to Speaker Boehner, but also Senate GOP leader Mitch McConnell and George H. W. Bush. I don’t know Boehner nor was this a topic one sought to explore when I briefly worked for Sen. McConnell. As for Papa Bush’s lower regions, the charge unquestionably is specious. I know this because his boy, George W., reveals as much himself in his massively bestselling memoir "Decision Points." The author, in fact, devotes six lines in this work of history to a joke about his father’s "black testicles." (See Page 20. I don’t want to spoil it for you.)

And the biggest takeaway:

The Palin saga makes women weep. "The Undefeated" was tested before focus groups of liberals who, according to the filmmaker, almost uniformly came away with a greater appreciation of Palin. This was especially true of women. Two different people told me that a liberal producer at a major television network (it was not Fox News) left the movie in tears after "realizing" how badly Palin had been treated by the media. Like all cold-hearted men, I confess that I was not in tears. But it is clear from the outset that I am not the film’s target audience. The movie really is geared to women. There are repeated references to Palin's gender, how she’s been discriminated against because of her dress and looks, and there is even an image of a campaign button that reads "You Go, Girl." But I won’t be able to ascertain the film’s true impact until I see Joy Behar weeping on air about how terribly she’s wronged the governor. And somehow I just don’t see that coming ...

Matt Latimer served as a senior speechwriter to Donald Rumsfeld and George W. Bush. He is the author of the New York Times bestseller " Speech-less: Tales of a White House Survivor ."