"State of Wonder": Dueling doctors in the Amazon 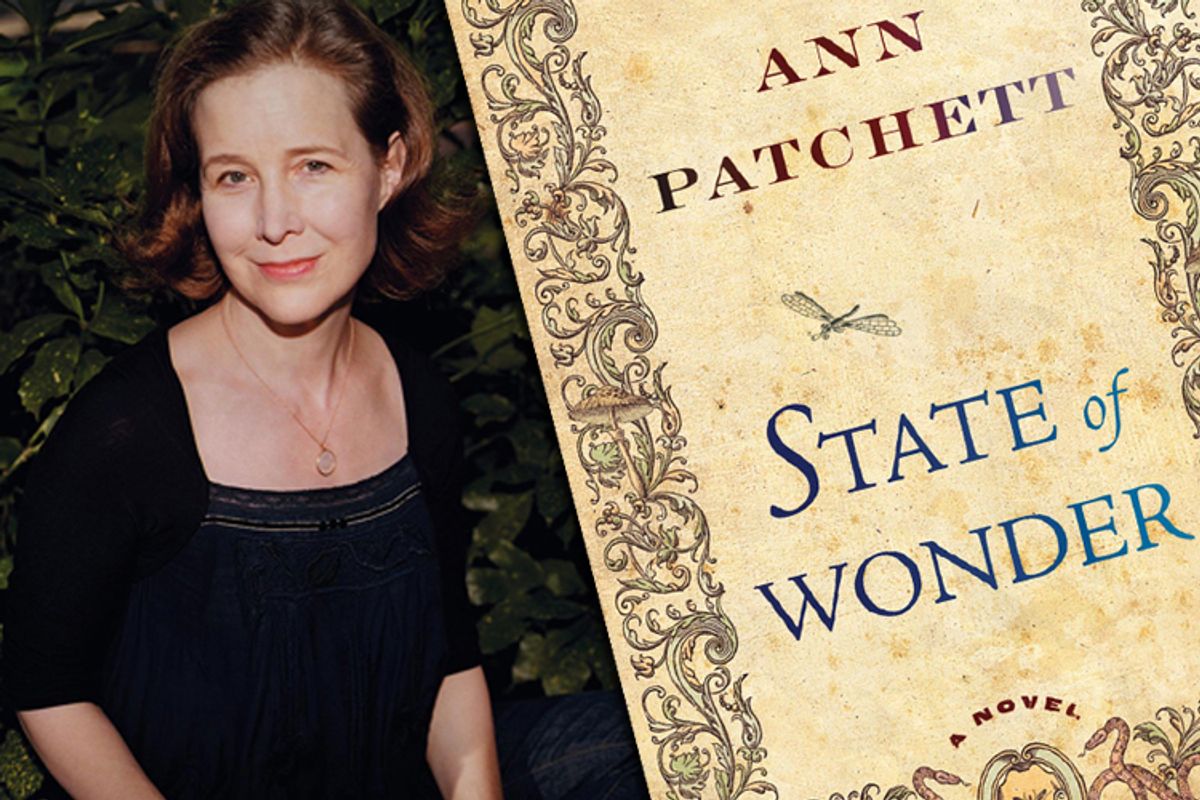 Joseph Conrad's "Heart of Darkness" is that rare work of challenging literature to fully infiltrate the popular imagination. The novella is, of course, about how encounters between the "civilized" and the "primitive" tend to draw atavistic urges out of the would-be civilizers, a dark theme indeed. But Conrad's masterpiece also has its naive side, represented by the narrator's quaint conviction that women live in a state of ignorance about the capacity for brutality in men. The colonial politics of the novella have been much commented upon; its sexual politics, less so.

With audacity and ambition, Ann Patchett has transfigured the story line of "Heart of Darkness" by setting it in the present day and turning both the seeker and the sought after into women. Her new novel, "State of Wonder," follows Marina Singh, a research pharmacologist, as she is sent to the Amazon. Her assignment: to check on Annick Swenson, a brilliant and imperious doctor who is developing a fertility drug in a remote village where the women are reputedly able to bear children into old age. Another scientist -- Marina's lab partner and friend -- has already died of fever while pursuing this quest. It takes the pleading of both her boss (who is also her lover) and her friend's widow to roust Marina from her beloved Minnesota and get her on that flight to Brazil.

As you might guess from her name, Marina's color (she's the daughter of an Indian man and an American woman) complicates the racial aspect of this story. Like Marlow, Conrad's narrator, she spends a lot of time cooling her heels in the antechamber -- in this case, a small city just outside the jungle -- while Dr. Swenson's minions decide whether she merits entry to the inner sanctum. Unlike Marlow, she doesn't find Brazil entirely alien. With her dark hair and skin, "she was able to pass in Manaus the way she was never able to pass in Minnesota." When Marina finally makes it upriver, tourists mistake her for a local and she gets dragooned into a sheepish performance of a "traditional" dance with a bunch of villagers. But that doesn't mean she feels at home in the Amazon, either; despite appearances, her internal landscape is "all prairie and sky."

Likewise, while everyone knows that she was a student of Swenson's over a decade ago, only Marina herself remembers that, as a resident, she let Swenson intimidate her into making a fateful mistake. Swenson is "the woman who fixed the course of Marina's life." The younger doctor will, then, have to contend with two forces of nature: the maddening jungle and her former mentor, who makes her feel "like Oliver Twist holding up his empty bowl." And she's not alone in that. The brutally honest and preternaturally focused Swenson has the entire Lakashi tribe cowed: "They were as afraid of her as any group of first year interns."

As with "Heart of Darkness," the seductions and corruptions of power haunt "State of Wonder," but it is the power of the Bad Mother -- in contrast to the Bad Father embodied by Conrad's Kurtz. Maternity is the awesome totem at this novel's center, the dubious object of Swenson's research and a demiurge capable of possessing Patchett's dueling doctors, compelling them to do terrible things. The jungle itself is fertility run amok, with its impacted woods, its waters filled with snakes (there's an almost hallucinogenically vivid fight scene with a 15-foot-long anaconda) and the relentless insects, "the hard-shelled and soft-sided, the biting and stinging, the chirping and buzzing and droning" that "flew with unimaginable velocity into the eyes and mouths and noses" of every human being in sight.

The ideas in Patchett's work often get overlooked, perhaps because they're so seamlessly integrated with the drama and color of her storytelling. (Also, probably, because her best-known book, "Bel Canto," is about love.) But make no mistake, this is a decidedly 21st-century novel, innovative not in its form but in its orientation. Patchett doesn't argue for the potency of her female characters, but simply takes it for granted. Neither Marina nor Dr. Swenson act "like men," that is, like the heroes who might be expected to reign over an exciting jungle adventure story like this one, but they preside all the same. And, like Mr. Kurtz, they are indelible.