Primer: Should we be happy about Yemen? 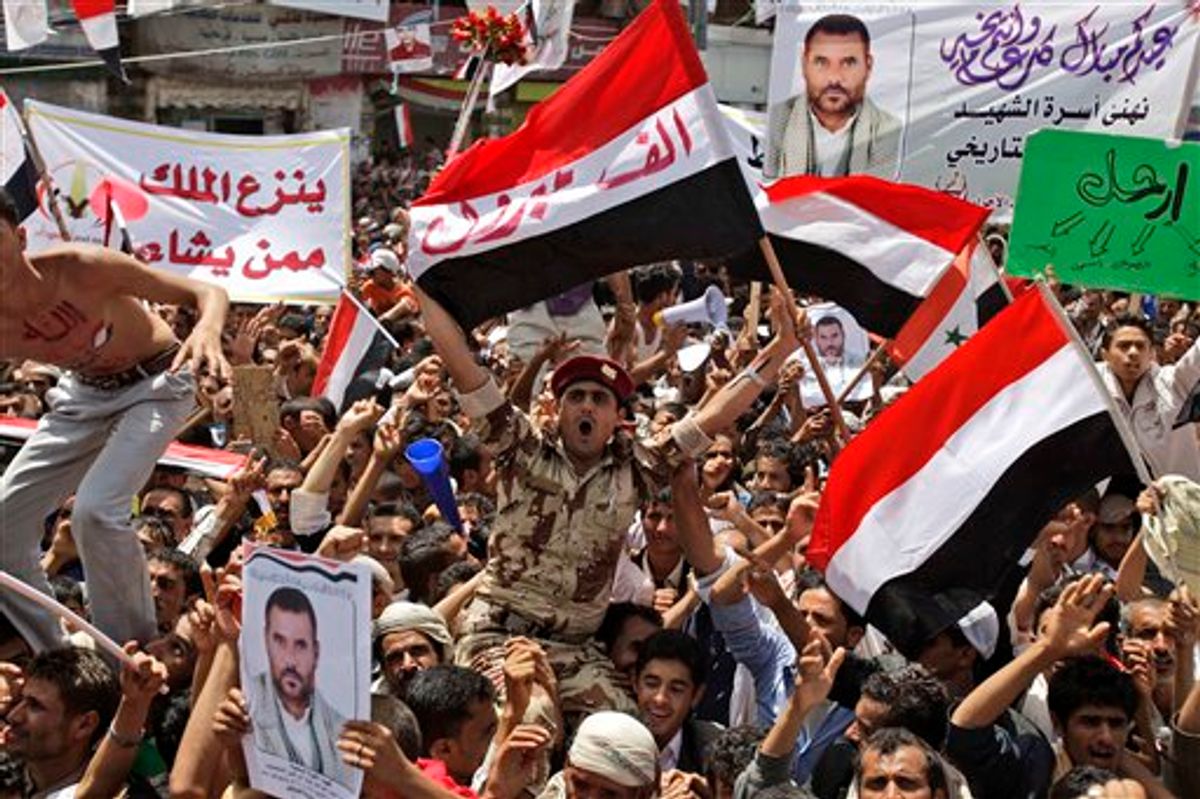 A Yemeni army soldier, center, lifted by anti-government protestors, reacts holding up his national flag with Arabic reads on it, " A thousand congratulations", as he and other demonstrators celebrate President Ali Abdullah Saleh's departure to Saudi Arabia, in Sanaa, Yemen, Sunday, June 5, 2011. Thousands of protesters are dancing and singing in the Yemeni capital Sanaa after the country's authoritarian leader flew to Saudi Arabia to receive medical treatment for wounds he suffered in a rocket attack on his compound. (AP Photo/Hani Mohammed) (AP)
--

The front page of British newspaper the Independent Monday morning proclaimed: "The Arab Spring claims its third despot." It may, however, have spoken too soon.

On Saturday, Yemen's President Ali Abdullah Saleh departed the country for Saudi Arabia to be treated for injuries incurred during an attack on his presidential palace; powers were transferred to his vice president. Tens of thousands of Yemenis took to the street Sunday to celebrate Saleh's departure after 33 years of ruling: they chanted celebratory chants and held signs hailing a "New Yemen," the Guardian reported. But Yemeni government officials are already promising Saleh's return within days.

Yemeni officials are now insisting that Saleh's visit to Riyadh is only a temporary one and he will return once he is healthy enough to resume work. "The president will return to Sana'a after he has recovered from his medical procedures. There is no doubt in this," said one Yemeni government official, speaking on the condition of anonymity.

Saleh's return is more uncertain than the government official line would hold and is also more likely than the joyous scenes in Sana'a would indicate. NPR's Jackie Northam reported that Christopher Boucek, a Middle East expert with the Carnegie Endowment for International Peace, says it's unlikely the president will return. According to Boucek, it was a condition of his treatment in Saudia Arabia (which reportedly involved removing shrapnel from his chest) that Saleh not return to resume presidential powers.

Time's Boone emphasizes though that even in Saleh's absence, the "shadow" of his oppressive rule looms large, predominantly in the shape of the loyalist military:

Military checkpoints still dot the city; and, more ominously, soldiers of the Central Security Forces, the only Yemeni military branch that has remained ostensibly loyal to President Saleh, still roam the streets.

Meanwhile, a Saleh opposition coalition -- Yemen’s Joint Meeting Parties -- are supportive of presidential powers being transferred to Yemen's vice president, Abduraboo Mansur Hadi, Bloomberg reports. Yet, according to the Guardian, Hadi is "considered a political lightweight, a non-charismatic and shadowy figure who enjoys little support inside or outside the military -- always a powerful player in Yemen's volatile politics" and as such seems unpromising as a leader for a divided nation in crisis.

And beyond this, as the Atlantic notes at some length, Yemen's Joint Meeting Parties are by no means the only prominent opposition group and that Saleh's opposition is itself fractured and faces collapse.

So with or without Saleh's return, Yemen faces a tumultuous future, as was evidenced when six people were killed over Sunday and Monday, reportedly by government snipers despite a tenuous truce agreement having been established between Hadi and tribal opposition leader Sheikh Sadiq al-Ahmar.