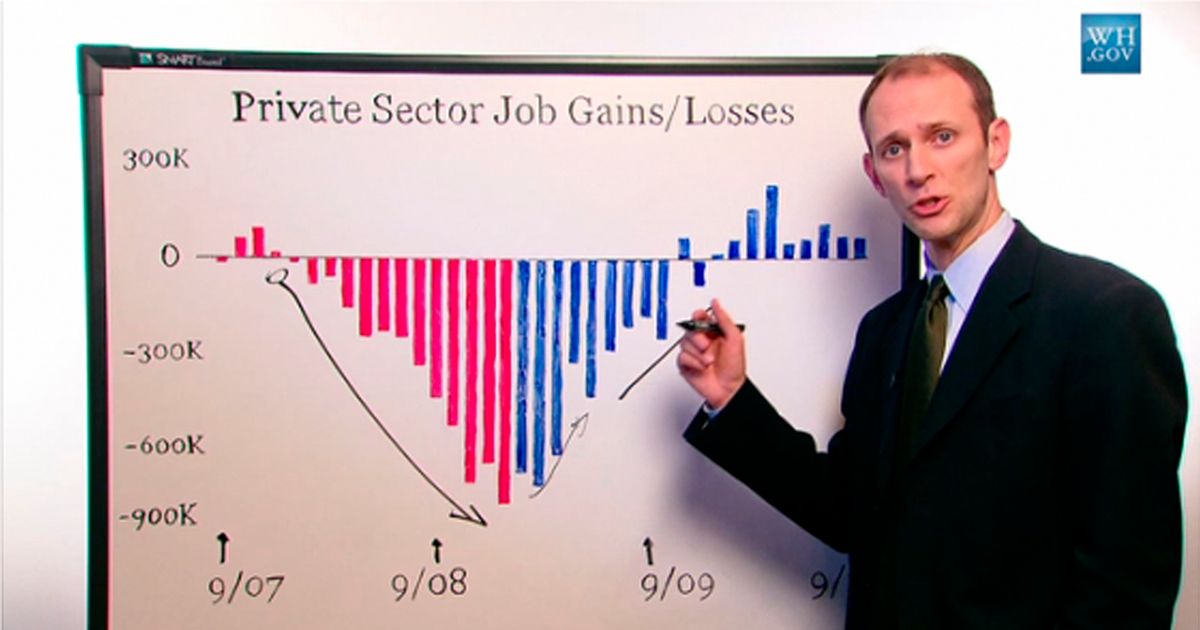 ** HOLD FOR RELEASE UNTIL 12:10 AM EST TUESDAY NOV. 22, 2010 ** This image provided by the White House shows chairman of President Barack Obama's Council of Economic Advisers, Austan Goolsbee, during a White House White Board video series. Pay a visit to the White House blog, Facebook or YouTube and you'll find Goolsbee planted in front of a dry-erase board deconstructing the president's economic policies on matters such as taxes and jobs. Four times this fall, Goolsbee has taken marker in hand to frame complex economic matters in viewer-friendly terms. (AP Photo/White House) (AP)
--

The collective sigh of resigned gloominess emanating from the econoblogosphere at the news that Obama's chief economic advisor, Austan Goolsbee, is leaving the administration provides a good, if depressing, snapshot of the state of economic policy in the United States. Pessimism reigns. A common theme: It's just no fun to be an economist in the White House anymore. The U.S. economy is slumping, but Washington is locked in partisan gridlock. Even if Obama wanted, with all his heart and soul, to push for more fiscal stimulus, the political reality is that pretty much the only positive option left for the White House is a dreary effort to limit the damage that a budget deal might further inflict on the economy.

With the 2012 presidential campaign beginning to gear up, posturing and spin will dominate all economic discourse for the foreseeable future. Combine that with the news that the most recent polling gives Obama some of his worst marks yet for managing the economy, and you can see why Goolsbee might not want to stick around. With his whiteboards and folksy manner, he's an effective spokesman for the administration, but the prospect of delivering his spin into a vicious headwind for the next 16 months, while not actually being able to meaningfully affect policy, can't be alluring.

Even worse, from a progressive's point of view, is where his departure leaves the White House. Of course, Obama's economic team never leaned to the left, by any standard -- even Goolsbee, who is being portrayed in some accounts as having supported more aggressive fiscal stimulus from the outset, is more properly seen as a centrist. (Remember the NAFTA fiasco?) But there's no question: Right now, there are no economists of stature within the administration who present any serious counterpoint to Treasury Secretary Timothy Geithner and White House Chief of Staff William Daley.

The Huffington Post has the best wrap-up and analysis of Goolsbee's departure, but you don't have to read further than the first paragraph to capture the essence:

Austan Goolsbee, one of President Barack Obama's longest serving policy advisers and the chairman of his Council of Economic Advisers, leaves his post pretty much as he inherited it: with the economy moribund, no clear path to vigor in sight and the unemployment rate stubbornly elevated.