Turn this plane around

A fight breaks out in-flight over a reclined seat. The crew opts to return to the D.C. airport. Overreaction? 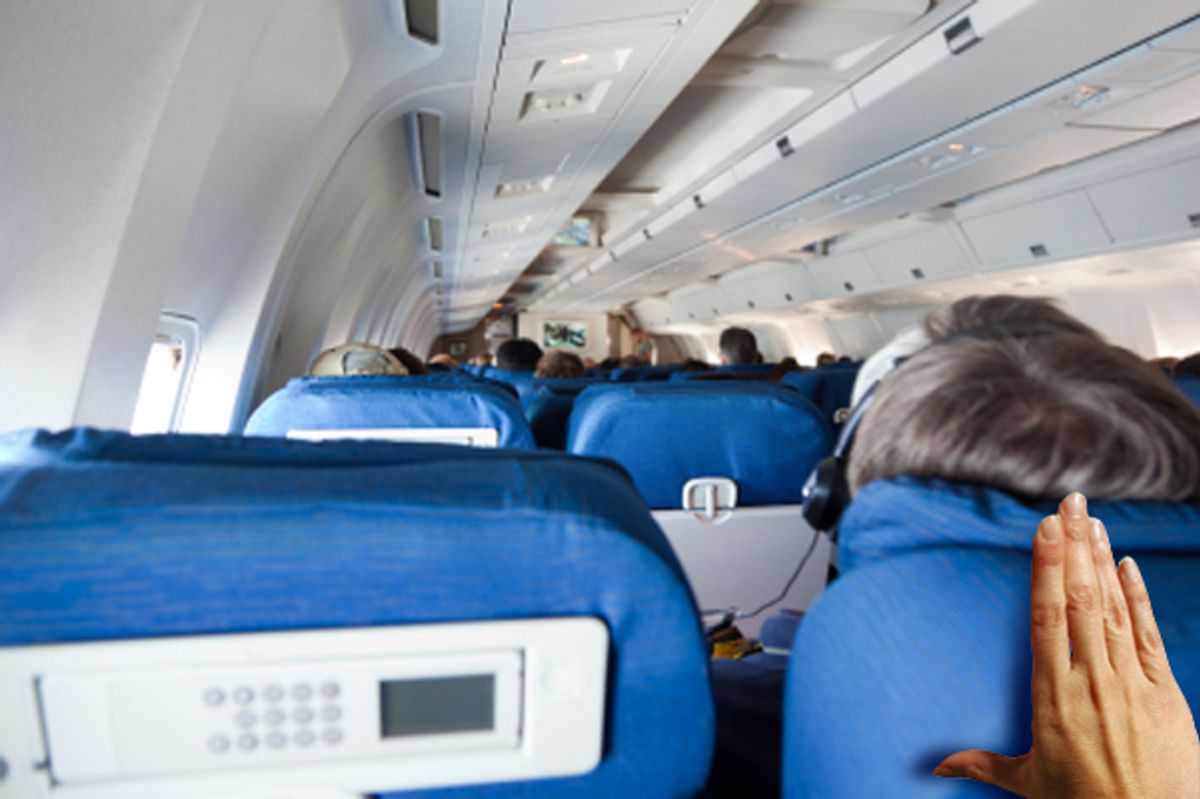 I'm expected to say something about last week's in-flight rumble aboard a United Airlines flight headed from Washington, D.C., to Accra, Ghana.

When a fight broke out on Flight UA 990 shortly after takeoff -- apparently over a reclined seat -- the crew elected to return to Dulles Airport, and did so under escort from a pair of F-16 fighters, dumping thousands of gallons of jet fuel along the way.

For airlines, diversions like this are a logistical nightmare, and the trickle-down costs can run into the hundreds of thousands of dollars. You've got fuel costs, crew costs, passenger rebooking and misconnect costs, and so forth. Not only was the outbound flight to Accra delayed, but the return flight as well, affecting hundreds of people.

Considering the stakes, the question people are asking is this one: Was the return really necessary? Couldn't they have just kept going rather than inconveniencing everybody else on the plane?

I would like to give everyone involved the benefit of the doubt. Assault, for one, is a serious crime, and if somebody was struck or beaten, a U-turn was probably the prudent, if unfortunate course of action. Do you delay arresting somebody because it happens to be a hassle to others? Imagine a police officer saying to an alleged perpetrator, "Just hang here, we'll be back to get you in 10 hours." There also was the danger of things escalating later in the flight. That's a long ride to Ghana, and at a certain point diversion options would be limited. Better to be back at Dulles than pulling into Senegal or the Cape Verde Islands at 4 a.m.

The problem is, nobody was arrested, and no charges were filed. The "assault," apparently, was nothing more than a slap. The choice of returning to the departure point was ultimately up to the captain, though it's likely things would have been coordinated with company dispatchers and security staff. For whatever reasons, this was their choice.

None of us knows for certain what the scene was like on board that 767, and media reports of in-flight incidents, especially those that rely on quotes from passengers, tend to paint a misleading and incomplete picture of what actually happened. But all things considered, it appears to be yet another overreaction in the name of "security." We've seen an awful lot of these in the past nine years or so.

Certainly the scrambling of the fighter jets strikes me as a clear (and taxpayer-funded) case of overkill. For better or worse, this is standard procedure now when anything unusual happens in the skies over the nation's capital. We needn't be reminded about the horrors of Sept. 11, 2001, and the catastrophic potential of a suicide hijacking. But some sanity, please. Two guys are fighting over a seat, and the next thing you know a tandem of F-16s is hovering off the wingtip, ready, if need be, to shoot the airplane down?

But don't get me started.

Incidents like this are always so rife with excess.

Consider too the dumping of the fuel. Thanks mostly to structural concerns, a plane's maximum allowable landing weight is often substantially less than its takeoff weight, and can be further restricted by runway length and other conditions. For a widebody jet on a long-haul flight, a quarter or more of its takeoff weight consists of fuel (passengers and their bags account only for around 10-15 percent). If the plane needs to return or divert before a certain amount of fuel is burned away, fuel will be jettisoned through valves in the wings (a cheaper and more effective alternative to tossing people and their luggage overboard). An overweight landing is always an option if time becomes critical, but otherwise every effort will be made to get as close as possible to a legal landing weight.

(While it is wasteful, unless the dumping takes place very close to the ground, as would only be the case in a serious emergency, the fuel will not sink to the ground coating people and their houses in a film of kerosene. It atomizes quickly into the atmosphere. Granted it's environmentally unfriendly -- but so is burning it through the engines. More about fuel dumping here.)

The incident also brings up the politics and ethics of recline. Considering the cramped quarters of economy class, is it right to recline simply because one's seat is able to do so? Some say yes, others say no. My own feelings are mixed. And while I wouldn't clock somebody in the head for stealing my space, I admit to harboring a sharp resentment for, as I call them, "assault recliners" -- those people who come hauling backward at full speed without the slightest regard for who is behind them or what might be resting on his or her tray table. How many laptop computers, I wonder, have been crushed by this ignorant behavior?

There are those who feel strongly that economy class chairs be made un-reclinable. This strikes me as a touch severe. And full as flights tend to be, that the seat behind you is sometimes empty. Some have chosen to take matters into their own hands through the purchase of a Knee Defender. This mischievous gadget locks the seat in front of you in place, allowing you to be a tad more comfortable while making your fellow traveler a tad less comfortable. My sympathies if you've had your laptop nut-cracked by an assault recliner; nevertheless I can't really endorse such a thing. You won't find the Knee Defender listed in the in-flight magazine alongside the usual contraband -- cellphones, GPS devices, radios -- but that doesn't mean you should use one.

So, all right, I've wrought some useful fodder from this lousy story, maybe. Yet it vexes me that we're talking about it in the first place. Is it just me, or does every, even slightly abnormal occurrence involving an airplane somehow worm its way into the news cycle?

The Flight 990 flap was splashed all over the Web, and got its share of newspaper and TV coverage as well. Why? Sure, such things are helpful for business (mine), and I suppose a story about passengers slugging it out mid-flight feeds a certain morbid curiosity and an appetite for novelty. But from all important perspectives this was a non-event. Twenty thousand commercial flights take off in this country every day of the year. And every day, out there somewhere, for this or that operational reason, one or more of them will be diverted or return to its point of origin, perhaps dumping fuel in the process. The vast majority of these "incidents," this one included, are meaningless from a safety point of view -- and neither are they particularly entertaining.