The case against "American exceptionalism" 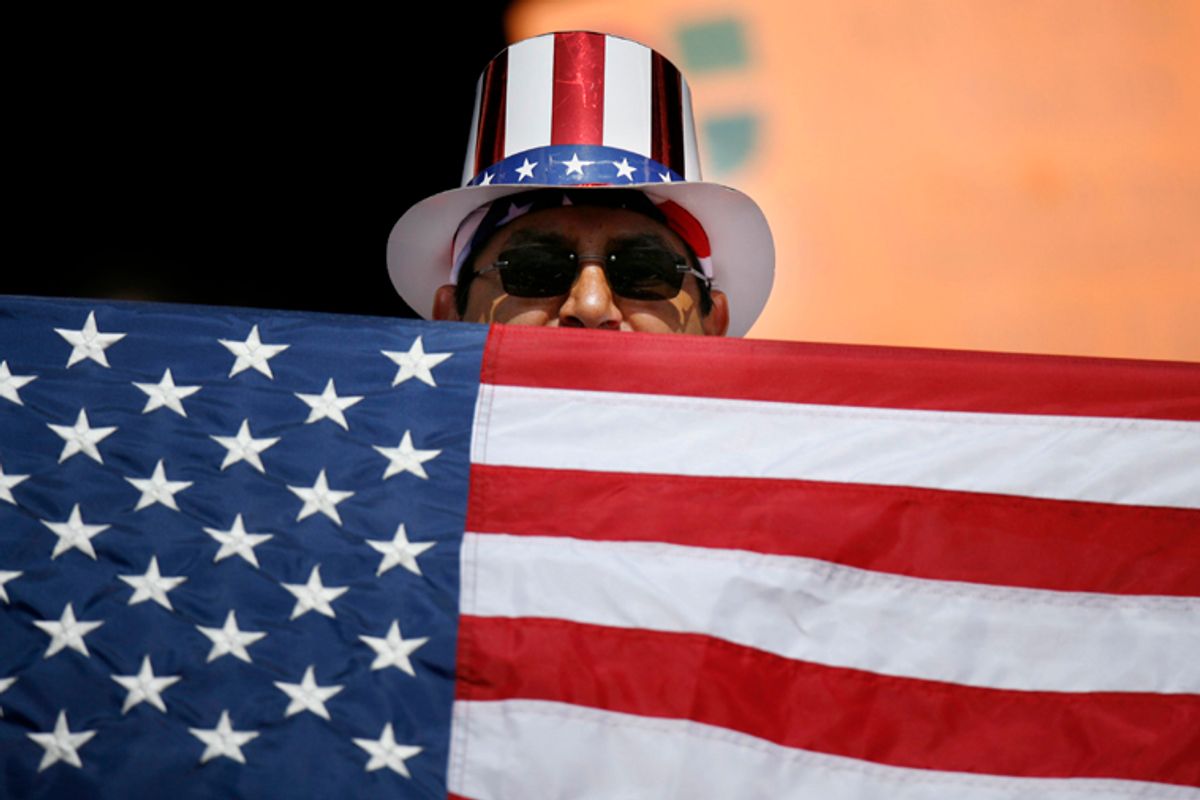 "There is no denying it: America is the greatest country in the world," according to Herman Cain, former CEO of Godfather’s Pizza and Republican presidential candidate, writing in the March issue of the American Spectator. Cain is upset that President Obama, while in France, did not inform the French and other Europeans that, compared to us, they were inferior and unexceptional:

Unfortunately, some politicians have either forgotten or chosen to ignore the glory of our founding. In April 2009, President Obama told a reporter in Strasbourg, France: "I believe in American exceptionalism, just as I suspect that the Brits believe in British exceptionalism and the Greeks believe in Greek exceptionalism." In saying this, the president implied that American Exceptionalism is nothing terribly special and instead simply chalked it up to the romanticism of patriotism.

"Let me be clear, President Obama," Cain concludes. "America is the greatest nation on Earth. We are not just any other nation, and we are certainly not analogous to our friends in Europe and elsewhere."

So says the former CEO of Godfather’s Pizza, pizzas and mafia godfathers being as American as apple pie. You might expect a little more modesty from the would-be first magistrate of a country that cannot produce adequate numbers of decently paying jobs, cannot share the gains from economic growth with the majority of its people, cannot address its long-term challenges because of political paralysis, and cannot seem to achieve a clear victory in any of its three ongoing wars.

Cain’s attitude would be amusing, if it were not so dangerous to America’s future.

The ideology of American exceptionalism holds that the Founders of the United States were the most brilliant individuals who ever lived and that the future prosperity and power of the country are to be attributed chiefly to the genius of the federal constitution, drafted in 1787 in Philadelphia (never mind that this was the second U.S. Constitution, replacing the first, the Articles of Confederation, a miserable failure). In the same way that Bible-thumping fundamentalists insist that all of the answers to all of today’s problems can be found in the Good Book, American exceptionalists thump the Federalist Papers. If the history that followed the American founding provides any guidance to us today, it is only the subsequent history of the United States itself. As good American exceptionalists, we are not allowed to peep beyond our borders, to learn from the successes and mistakes of people in other countries.

Americans have always been proud of their republic -- but not too proud to learn from others. When America worked, Americans did not hesitate to copy the innovative ideas and best practices of other countries.

Consider the two 19th-century "American systems." One was what was known as the American system of manufacturing -- the use of interchangeable parts in production. The other was the American System of Henry Clay and his allies and disciples, including Abraham Lincoln -- a coherent plan for industrializing the United States, based on a combination of infant-industry protectionism, national banking and national investments in infrastructure. Both American systems were influenced by -- cover the ears of your children, America! -- the French.

The American system of manufacturing ought to be called the French system, because it originated as le systeme Gribeauval. Jean-Baptiste Vaquette de Gribeauval (1715-1789) was a French general who proposed to rationalize French arms production by assembling standard weapons from standardized components. Gribeauval’s idea was developed by Honore Blanc. While serving as the U.S. ambassador to France, Thomas Jefferson reported on his visit to Blanc’s factory in a 1785 letter to Secretary of War Henry Knox: "Supposing it might be beneficial to the U.S., I went to the workman. He presented me with the parts of 50 [musket] locks taken to pieces and arranged in combination. I put several together myself taking pieces at hazard as they came to hand, and they fitted in the most perfect manner. The advantages of this, when arms need repair, are evident."

Jefferson sent a copy of a pamphlet by Blanc to Knox. In 1793, a French military engineer who had served in the American war of independence with Lafayette named Major Louis de Tousard fled the French Revolution and joined the U.S. Corps of Artillerists and Engineers when it was formed in 1795. Tousard’s 1798 proposal for a School of Artillerists and Engineers influenced the design of West Point, and in 1809 he published a three-volume treatise, the American Artillerist’s Companion. The ideas of Gribeauval, Blanc and Tousard were brought with them by the American military engineers who worked at the federal armories founded in 1794 at Springfield, Mass., and at Harper’s Ferry, Va., in 1798. From here the American system of manufacturing spread to the sewing machine, bicycle and automobile industries, contributing to 20th-century mass production.

Then there is the American system of Henry Clay, which, building on Alexander Hamilton’s support for federal promotion of strategic industries, laid the foundations for the emergence of the U.S. as the world’s dominant industrial power by 1900. In an 1824 speech calling for industrial protection to shelter American industries until they were powerful enough to compete on their own, Clay cited the policies "of the Edwards, of Henry the Great, of Elizabeth, of the Colberts, abroad; of our Franklin, Jefferson, Madison, Hamilton, at home."

Then Clay quoted "the master spirit of the age" -- Napoleon. During the Napoleonic Wars, Napoleon had promoted the Continental System in France and French-occupied Europe, a program of government sponsorship of industries undertaken in response to Britain’s blockade. Napoleon’s Continental System and Clay’s American System had the same geopolitical purpose: economic independence from Britain. Clay quoted Napoleon: "I at first confined myself merely to prohibiting the web, then I extended the prohibition to spin cotton; and we now possess, within ourselves, the three branches of the cotton manufacture, to the great benefit of our population, and the injury and regret of the English ..."

In technological innovation, America lagged behind Britain, France and Germany until the 20th century. The 19th century U.S. textile industry was founded by industrial espionage on the part of individuals including Samuel Slater, a British immigrant, and Francis Cabot Lowell, a Boston merchant, who pirated British technology in defiance of British law. Many Americans believe that Edison invented the light bulb and that Henry Ford invented the car. In fact Joseph Swan, a British inventor, developed the light bulb, and British courts compelled Edison, who had filched from Swan, to share his British profits with Swan. The automobile was invented by Germans and improved by French innovators, before Henry Ford and other American automakers got into the business.

Only in the mid-20th century did the "exceptionalist" U.S. catch up in technological creativity with the Europeans. And Uncle Sam did so by copying Kaiser Bill.

Computer technology, nuclear energy, the space program, advanced biology and pharmaceuticals and medicine -- in all of these areas the United States has led the world because of our federally supported system of research universities and research institutes. We shamelessly copied this system from Imperial Germany. Historians credit the modern system of government support to the Prussian minister of education, Friedrich Althoff (1839-1908), who with Kaiser Wilhelm’s support, in the late 19th century developed research universities and publicly  and privately funded R&D institutions. The German model was copied by Stanford and MIT, which have contributed disproportionately to modern technological innovation. Following World War II, the U.S. government adopted the recommendation of Vannevar Bush, an MIT engineer who invented an early version of the computer, to follow Germany’s example and provide permanent, peacetime funding for scientific R&D through the National Science Foundation, as well as through the Pentagon and the National Institutes of Health.

Unfortunately, American exceptionalism persists in healthcare. Today the U.S. is unique among developed democracies in having out-of-control healthcare costs threatening government budgets and the private economy. Inasmuch as every other industrial country manages to control medical costs better than we do, you would think that American politicians and pundits would be consumed with curiosity about how they do it. You would think that Democrats and Republicans would be touring Europe and East Asia on fact-finding missions and that the halls of Congress would be filled with discussions of Swiss fee schedules or the British single provider model or the German nonprofit sickness funds.

Instead, we find Democrats afraid to point to successful cost containment models of the kind used in other countries, like government-imposed fee schedules, for fear of accusations that they are Yursymps (European sympathizers). Republicans like Paul Ryan fantasize that the market can control healthcare costs -- even though they cannot point to a single country with reasonable healthcare costs that relies on free market competition to set the prices of drugs, operations, hospital stays and physician fees. Not a single country. Not even Chile, which, under the tyrannical mass murderer Gen. Augusto Pinochet, implemented the American conservative fantasy of privatized social security, to the detriment of its retirees.

But we’re special. We’re Americans. We’re exceptional. If we want to learn how to keep healthcare costs from devouring the economy, we don’t need to study the methods used by comparable countries -- because no other countries are comparable to us, in our virtue, our wisdom, and our divinely inspired founding. No, instead of sending fact-finding commissions to other nations to meet with their medical experts, we’ll turn to the Federalist Papers, and try to deduce what Hamilton, Madison and Jay might have said about physician reimbursement rates.

The irony is that even right-wing American exceptionalism is borrowed from abroad. The pompous conviction that our nation is uniquely blessed by God is part of America’s cultural inheritance from Britain, along with our baffling common law and our even more incomprehensible medieval British system of weights and measures. In his novel "Our Mutual Friend," Charles Dickens satirized the Victorian era’s "British exceptionalism," expressed by his character Mr. Podsnap:

'And OTHER countries,' said the foreign gentleman. 'They do how?'

'They do, Sir,' returned Mr Podsnap, gravely shaking his head; 'they do--I am sorry to be obliged to say it--AS they do.'

'It was a little particular of Providence,' said the foreign gentleman, laughing; 'for the frontier is not large.'

'Undoubtedly,' assented Mr Podsnap; 'But So it is. It was the Charter of the Land. This Island was Blest, Sir, to the Direct Exclusion of such Other Countries as--as there may happen to be."

Herman Cain is engaging in purest Podsnappery when he writes: "Unfortunately, some politicians have either forgotten or chosen to ignore the glory of our founding."

Maybe if we learned to do some things better from our neighbors on this planet, we’d be able to boast about the glory of America’s future, and not just the glory of its past.