Amina Abdallah Arraf, the supposed author of "A Gay Girl in Damascus," has reportedly gone missing. Or has she? 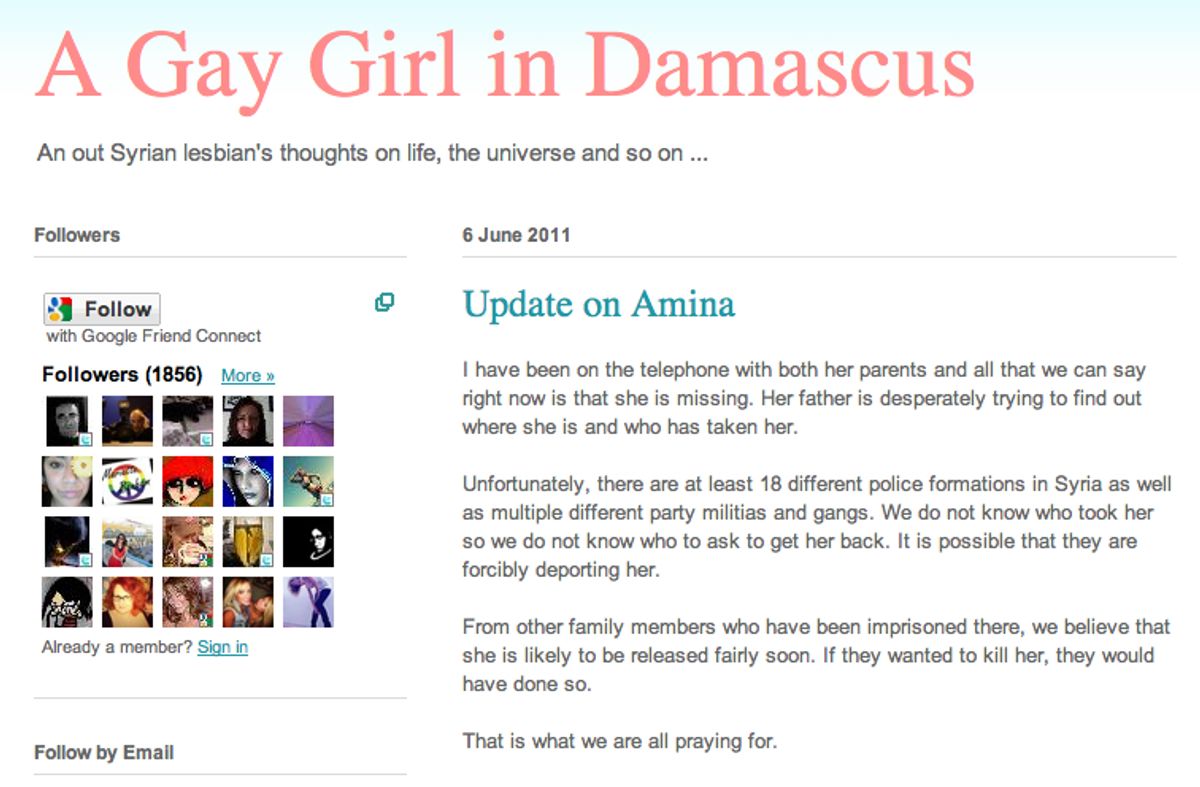 Yesterday, we reported that the Syrian-American author of a blog called "A Gay Girl in Damascus" had apparently been "abducted." Journalists have since begun to call the blogger's identity -- and even her backstory -- into question. No absolute conclusions can be drawn, but this is what we know so far.

News of Amina Abdallah Arraf's alleged detainment surfaced on Monday when a note was left on her blog by her "cousin," Rania Ismail. Rania wrote the following:

Earlier today, at approximately 6:00 pm Damascus time, Amina was walking in the area of the Abbasid bus station, near Fares al Khouri Street. She had gone to meet a person involved with the Local Coordinating Committee and was accompanied by a friend.

Amina told the friend that she would go ahead and they were separated. Amina had, apparently, identified the person she was to meet. However, while her companion was still close by, Amina was seized by three men in their early 20’s. According to the witness (who does not want her identity known), the men were armed. Amina hit one of them and told the friend to go find her father.

One of the men then put his hand over Amina’s mouth and they hustled her into a red Dacia Logan with a window sticker of Basel Assad. The witness did not get the tag number. She promptly went and found Amina’s father.

The men are assumed to be members of one of the security services or the Baath Party militia. Amina’s present location is unknown and it is unclear if she is in a jail or being held elsewhere in Damascus.

In a lengthy TweetDeck post yesterday, Carvin (whom The New York Times describes as "an expert at debunking Internet rumors") wrote the following:

Earlier this week I got a tip from an LGBT Syrian source who didn't believe Amina existed. ... Independently of this, two other Syrian sources I knew mentioned similar speculation to me. They didn't say she was fictitious, per se, but they were skeptical of the circumstances described in her My Father The Hero blog post. My first source also expressed similar skepticism.

He went on to say that he had been unable to find anyone on Twitter who had ever met Amina in person -- and that a more extensive investigation of her acquaintances had revealed that even a close Canadian "friend" (who we believe is Sandra Bagaria, identified elsewhere as Amina's "partner") had never actually met the blogger in the flesh, instead communicating only electronically. (As far as we are aware, as of this afternoon, Carvin has still not found anyone who claims to have actually seen Amina; The New York Times confirms that Sandra Bagaria says she has never met Amina Arraf.)

Despite his doubts and investigations, Carvin himself has been non-committal:

I still have many more questions than answers, but I currently believe Amina is a real person, but one who is much more expressive about herself online than offline. It is possible that Amina Arraf is a pen name, to protect herself in Syria, but so far I can't prove it one way or another. If it is just a pen name, that might explain why the sources I talked to said they'd never met a person by that name. Even so, I wouldn't be surprised if I indeed found people who know her in person. It's just taking longer time than I would have liked.

However, yet another red flag was raised by the Wall Street Journal this morning, when Isabella Steger reported that many photos of "Amina" published online since her supposed capture appear to depict another, unrelated woman -- called Jelena Lecic -- who lives in London. (It's less than clear why Lecic and Arraf might have been confused, since Lecic does not acknowledge any relation to the blogger.) Steger writes:

A London publicist said Wednesday that the photos [of "Amina"] circulating on the Web and in the media show someone else entirely. The photos are of Jelena Lecic, who lives in London, according to publicist, Julius Just. A press release he distributed includes a photo of a woman who he says is Ms. Lecic, who appears to be the same woman in the photos accompanying stories about Ms. Araf. Mr. Just said Ms. Lecic’s ex-husband contacted him when he saw that the photos circulating of Ms. Araf were in fact of his ex-wife. ...

The Atlantic Wire's Uri Friedman has located a Facebook profile for Jelena Lecic that does appear to show a woman resembling the one in photos of "Amina" reproduced yesterday.

It's also interesting to note that in posts on "A Gay Girl in Damascus," Amina sometimes referred to an "autobiographical novel" she was working on. The New York Times's Lede blog elaborates:

A State Department spokesman told The Lede on Tuesday: “Officials in Damascus and Washington are working to ascertain more information about Ms. Arraf, including confirmation of her citizenship.” If the first chapter of a book posted on the Gay Girl in Damascus blog in February -- described by the author as both an autobiography and a novel -- is factual, her American roots are very deep indeed.

In this text, Ms. Arraf wrote that she was born in Staunton, Virginia, in October 1975 to Abdallah Ismail Arraf and Caroline McClure Arraf. The McClures, she explained, emigrated to Virginia from Ulster in 1742.

However, it is not entirely clear which parts of this autobiographical novel are fact and which are fiction. Much of the same text was posted almost four years ago on another blog, Amina Arraf’s Attempts At Art (and Alliteration), that first appeared online in September 2007.

Finally, Melissa Bell and Elizabeth Flock from The Washington Post add the following information about another one of Amina's correspondents:

Paula Brooks, an American blogger started communicating with Arraf via e-mail, but was initially suspicious about her identity when she saw the location of Arraf’s I.P. address. It seems to have been routed through Edinburgh in Scotland. Arraf told Brooks she occasionally used proxy Web addresses to protect her safety in Syria, a procedure some Middle East bloggers have turned to under Internet blockades. ...

Arraf also sent Brooks a photo of herself in February that matches the photos Jelena Lecic claims were taken from her Facebook page.

We'll update with more information as soon as it becomes available.