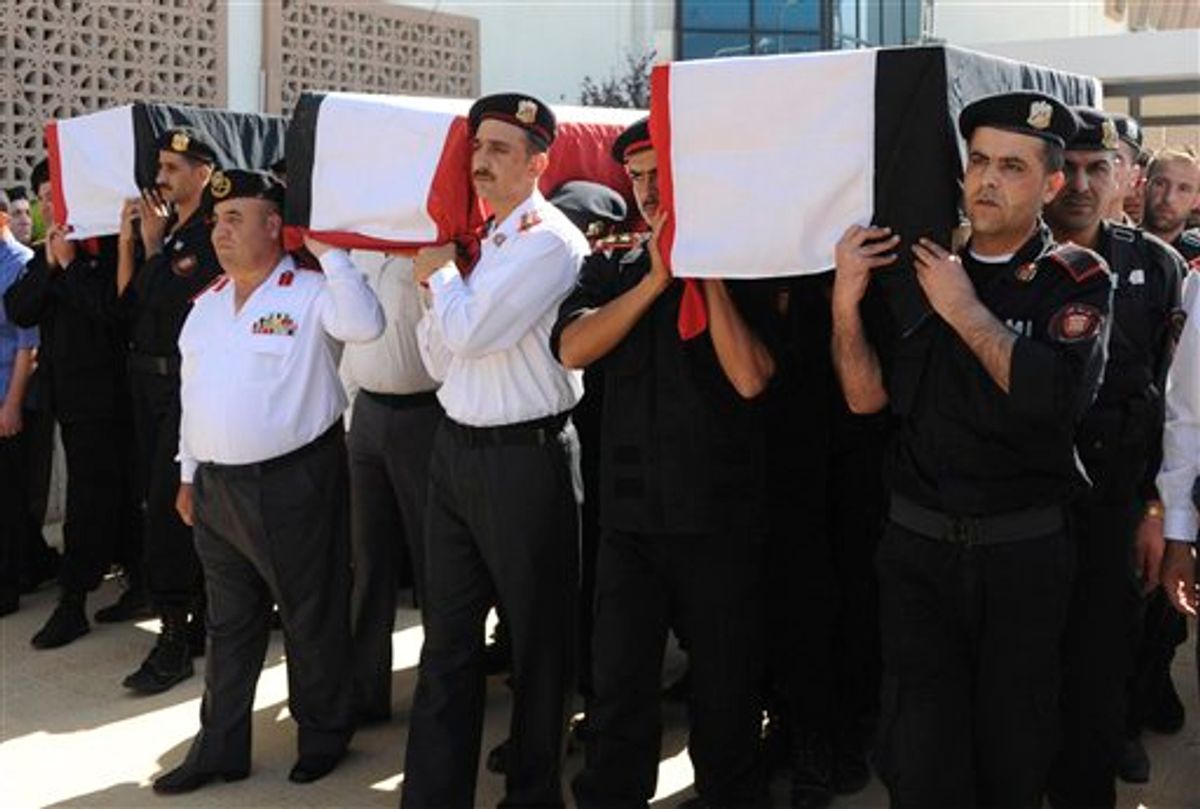 In this photo released by the Syrian official news agency SANA and according to them, Syrian policemen carry the coffins of their comrades who were killed in recent violence in the country, during their funeral procession at the Police Hospital in Damascus, Syria on Tuesday, June 7, 2011. Residents fled the northern region of Jisr al-Shughour on Tuesday where authorities said weekend clashes between armed men and government troops killed 120 security forces, fearing retaliation from a regime known for ruthlessly crushing dissent. (AP Photo/SANA) EDITORIAL USE ONLY (AP)
--

The United States and its allies pushed ahead Wednesday with efforts to bring Syria before the U.N. Security Council for failure to cooperate with the International Atomic Energy Agency, despite opposition from China and Russia.

A draft of a resolution obtained by The Associated Press finds Syria in "non-compliance with its obligations" with IAEA requirements to allow inspectors access to all nuclear facilities to ensure they are not being used for military purposes.

The draft criticizes Syria's lack of cooperation with "repeated requests for access" by the U.N. nuclear agency to information about a facility at Dair Alzour that appears to have been a nuclear reactor capable of producing plutonium, which is used to arm nuclear weapons. The site was destroyed in 2007.

The draft was circulated Wednesday to the 35 ministers who serve on the IAEA's board of governors to be discussed and put to vote. It needs majority approval from the board before it can be sent to the Security Council.

The IAEA has tried in vain since 2008 to follow up on strong evidence that the Dair Alzour site, bombed in 2007 by Israeli warplanes, was a nearly finished reactor built with North Korea's help.

Drawing on a May 24 report by IAEA chief Yukiya Amano, the resolution expresses "serious concern" over what it calls "Syria's lack of cooperation with the IAEA Director General's repeated requests for access to additional information and locations as well as Syria's refusal to engage substantively with the Agency on the nature of the Dair Alzour site."

Some nations have expressed misgivings about bringing Syria before the Security Council over an unresolved nuclear issue while there is a nationwide crackdown on a revolt against President Bashar Assad, but diplomats have indicated that a majority should be possible.

But without China and Russia the question remains whether that is enough, given the power of those nations to veto any measures that come before the Security Council.