Blaze is now more than twice the size of Chicago 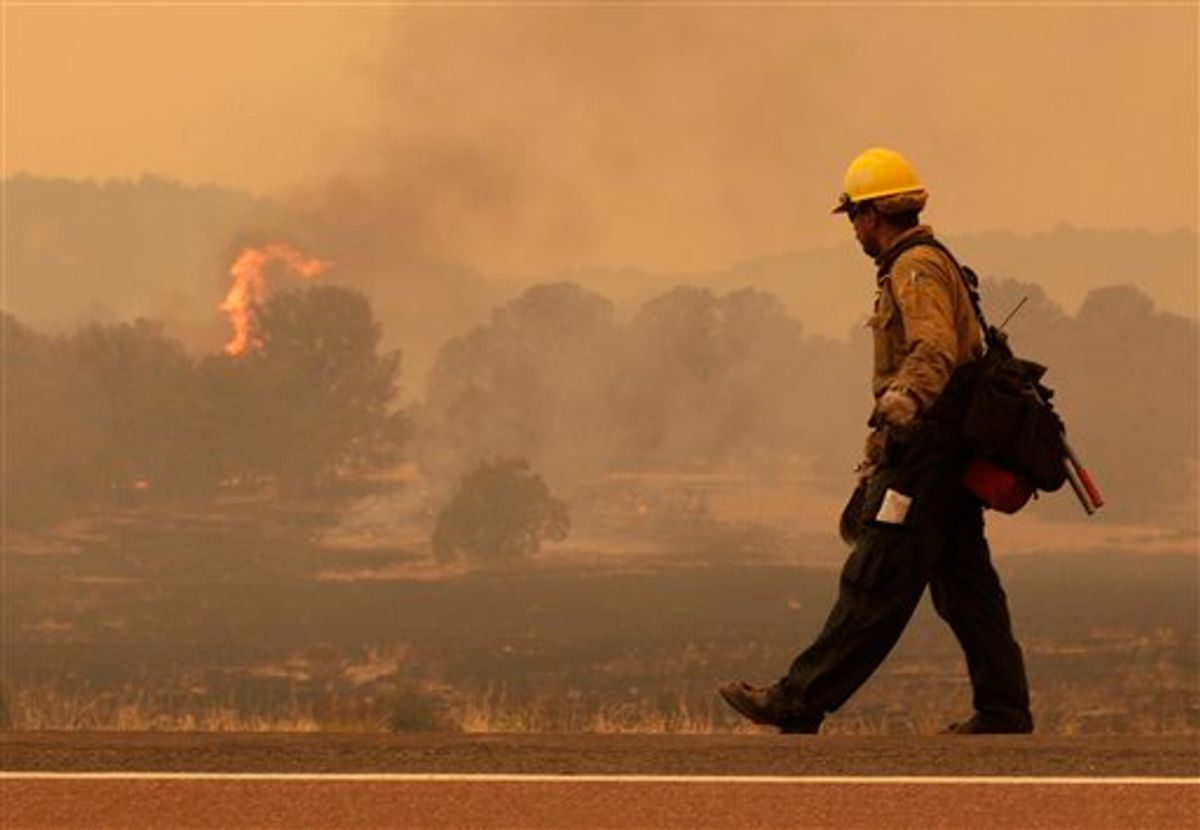 Firefighter Rigoberto Torres, of Orange Cove, Calif., walks along the road while watching a flame during the Wallow fire in the Apache-Sitgreaves National Forest near Springerville, Ariz., Tuesday, June 7, 2011. Officials say the blaze has already burned 486 square miles and winds have been driving the flames 5 to 8 miles a day since the fire began a week ago. (AP Photo/Jae C. Hong) (AP)
--

Officials are hoping their efforts overnight will keep a mammoth forest fire from cresting a ridge and racing into two eastern Arizona towns, giving firefighters the upper hand on the 11th day of what has proved to be an overwhelming battle.

About half of the 4,000 residents who call Eagar home were forced to leave Tuesday afternoon as flames from the Wallow fire licked the ridges surrounding the area. Residents in the rest of Eagar and in neighboring Springerville grew worried as they awaited word of whether they will have to flee, too.

"Everybody that's here is suffering from anxiety from this," Apache County Chief Sheriff's Deputy Brannon Eagar told residents who gathered for a public meeting Tuesday night.

"We never thought we'd see this roll over the hill, but it's here and we're going to deal with it the best that we can. Some people are frustrated, and I can understand that, and I'm sorry," he said.

As daylight waned Tuesday, cars, trucks and trailers loaded with belongings streamed out of Eagar as sheriff's deputies and police officers directed traffic. Flames dotted a ridge on the southeastern side of Springerville, and columns of orange smoke rose from the hills. Ash rained from the sky, which was filled with thick smoke, and when the sun peeked through, it was blood-red.

Crews worked feverishly overnight to ignite unburned areas of grass and other fuel to starve the fire in case it burned over the ridge and into the grasslands and stands of trees that border the two towns.

"Right now, it's not moving as fast," fire commander Joe Reinarz said. "This is our chance. When we get it down here in the pinon and juniper and the grasslands, we can make a lot of advances on getting a corral around this thing."

The blaze has burned 486 square miles of ponderosa pine forest, driven by wind gusts of more than 60 mph, since it was sparked May 29 by what authorities believe was an unattended campfire. Now more than twice the size of Chicago, the fire became the second-largest in Arizona history Tuesday.

No serious injuries have been reported, but the fire has destroyed 10 structures so far. It has cast smoke as far east as Iowa and forced some planes to divert from Albuquerque, N.M., some 200 miles away.

By late Tuesday, the flames were about two miles from Springerville and Eagar, fire officials said. The blaze did skirt around Greer because crews were able to keep it out of the canyons surrounding the small resort town.

Along with the back burns overnight, crews Wednesday planned to continue scraping away brush and trees to create a barrier around Springerville and Eagar. More fire personnel and police were also expected to descend on the area, known as Round Valley.

Thousands of firefighters, including many from several western states and as far away as New York, are already helping.

Dozens of them worked Tuesday alongside a stretch of U.S. 191 about two miles outside of Springerville, burning vegetation along one side of the highway to keep the approaching fire from jumping across and heading into town. Other crews removed brush from around homes near the foothills.

Angie Colwell, her husband Mike and their two children were loading up their belongings as authorities ordered their Eagar neighborhood to evacuate.

"We love the mountains and we're just afraid of what's going to be left after the fire comes through," the longtime resident said.

The Apache County sheriff's office issued the evacuation order for areas south of state Route 260 and east of Greer just before 4 p.m. The highway was closed after the evacuation, and patrol cars were stationed at checkpoints leading south.

Eagar has about 4,000 residents, while Springerville has another 2,000. In all, about 7,000 people have been ordered to prepare for evacuation in recent days.

With a blaze as large as this being driven by unpredictable and gusty winds, putting the fire out is a gargantuan task. All fire managers can do is try to steer it away from homes and cabins by using natural terrain, burning out combustible material first and trying to put out spot fires sparked by embers blowing in front of the main fire front.

While he gave no guarantees, Reinarz told residents he thought the towns were defensible as long as the wind cooperated and firefighters were able to use the lowlands to their advantage.

Reinarz and his crews have the confidence of residents, some who spoke up during the public meeting to offer support. Signs of appreciation have also popped up in front of businesses and homes.

For those who have been forced to leave, the American Red Cross has an evacuation center at a high school about 15 miles west in Lakeside, Ariz. The center was opened at Blue Ridge high after last week's evacuation of about 2,700 people from mountain communities, but only about 50 were there before the new evacuations Tuesday.

The cost of fighting the Wallow fire has approached $8 million, and forest supervisor Christopher Knopp said it's likely to get more expensive as more resources and personnel are used.

Another major wildfire was burning in southeastern Arizona, threatening two communities. The 166-square-mile Horseshoe Two fire has devoured three summer cabins and four outbuildings since it started May 8.

Arizona's largest blaze came in 2002 when flames blackened more than 732 square miles and destroyed 491 homes west of the Wallow fire. A fire in 2005 burned about 387 square miles in the Phoenix suburb of Cave Creek and consumed 11 homes.

Christie reported from Phoenix. Susan Montoya Bryan can be reached at http://twitter.com/susanmbryanNM