The four ways this can end for Anthony Weiner

A triumphant reelection victory? A humbling defeat to the GOP? A cable news deal? Here's where it could go 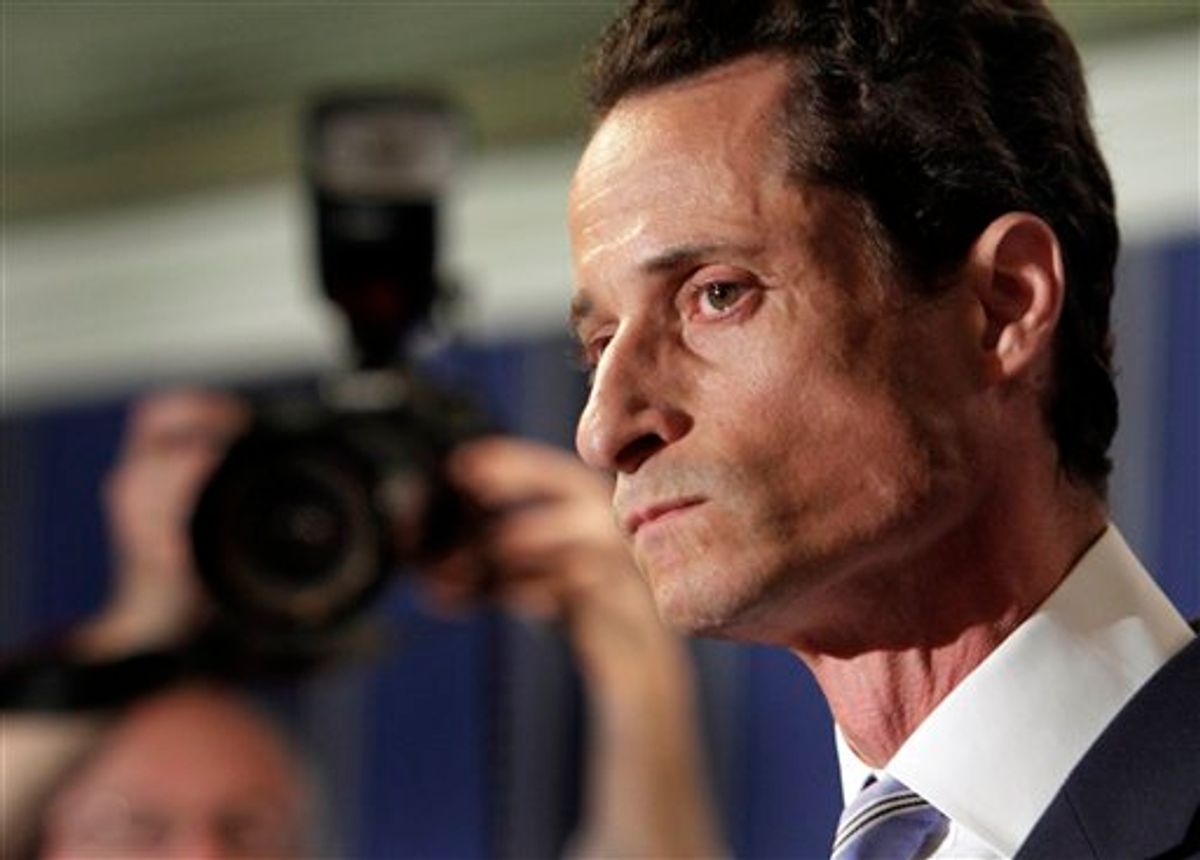 U.S. Rep. Anthony Weiner, D-N.Y., addresses a news conference in New York, Monday, June 6, 2011. After days of denials, a choked-up New York Democratic Rep. Anthony Weiner confessed Monday that he tweeted a bulging-underpants photo of himself to a young woman and admitted to "inappropriate" exchanges with six women before and after getting married. (AP Photo/Richard Drew) (AP)
--

The calls from his fellow Democrats for Anthony Weiner to resign his House seat are only increasing, but the New York congressman still seems intent on riding out the storm.

Where is this all heading? Here are the four most likely outcomes. Note that all of them assume that the 2013 mayoral campaign that Weiner had long been planning is now not a reasonable prospect:

1. He resigns. Most politicians instinctively say they won't quit when a scandal hits. Even Eliot Spitzer initially refused to resign when his prostitution scandal broke, but a few days of international press coverage -- and the realization that no one in his party had his back -- prompted him to change his mind.

Democrats are sending Weiner clear messages now that they want him gone. He already had a poor to nonexistent relationship with most of his colleagues in the House -- not to mention his party's leadership -- and staying now will only make things worse. Plus, the two main reasons he's been in Congress -- to position himself for a mayoral bid and to be a cable news star -- are now inoperative. The actual day-to-day work of a congressman has always bored Weiner, but that's about all there is for him to do now. And even if he decided to throw himself into legislative work like never before, he'd still probably be frustrated, with so many of his colleagues resenting him and giving him the cold shoulder. So why stick around?

Add in the news late Wednesday afternoon that Weiner's wife, Huma Abedin, is pregnant and the logic of quitting now only seems to increase.

2. He stays in Congress -- for a long time. Like Charlie Rangel last year, Weiner surely understands that it's in the self-interest of many of his Democratic colleagues -- particularly those from marginal districts -- to distance themselves from him and to demand his resignation. And he surely knows that no one in leadership is about to rally to his defense, since he has no powerful allies and few friends within the caucus.

But he also understands that there's really nothing they can do. Sure, Minority Leader Nancy Pelosi has embarrassed him by referring the matter to the ethics committee, but the investigative process there can drag on for months, even more than a year, and rarely results in anything more than a slap on the wrist. And even if Weiner ends up being reprimanded by his colleagues at some point down the line, it won't necessarily hurt him with his constituents back home: Barney Frank and Gerry Studds famously proved this, and Rangel (sort of) did too.

So Weiner could conceivably endure a few more days of media grief and resignation demands until the story dies down, formally announce at some point soon that he won't run for mayor in 2013 and will instead redouble his commitment to his 9th District constituents, issue another round of apologies if and when an embarrassing ethics committee report is released, and survive the primary and general elections in 2012, likely with diminished margins. With no mayor's race to enter in 2013 (when a Democrat will presumably win, meaning 2017 will probably be out too), Weiner would then essentially be a congressman for life, a role he never previously envisioned himself -- perhaps he'd then throw himself into the nitty-gritty legislative work he's avoided for the first 13 years of his House service? (He could also, over time, gradually return to his role as a cable news regular, albeit with less swagger -- and maybe, just maybe, find his way back into the mix for a mayoral election well into the future.)

3. He stays in Congress -- and gets the Solarz treatment.  Under this scenario, Weiner spurns his colleagues' resignation demands and sets about shoring up his support in the 9th District. But then he's hit with a curve ball: His own party in Albany serves him up.

As Mark Greenbaum explained here the other day, New York must trim its congressional delegation by two in the coming reapportionment process. The assumption is that each party will choose one seat to sacrifice, and Weiner's Brooklyn/Queens-based district is now a very tempting target -- both because Democrats in New York don't like Weiner and because they now see him as weak. The 9th District is hardly a Democratic bastion; it have strong support to George W. Bush in 2004 and John McCain in 2008 and is winnable for a Republican under the right circumstances -- like, say, a scandal involving the incumbent Democrat. Redistricting is always a painful process in New York, which has been shedding seats for decades, but Weiner's troubles could make the current round fairly easy for Democrats, who could protect every other incumbent at the expense of the one who nobody likes -- and who nobody fears anymore, either.

He wouldn't be the first nationally prominent New York City Democrat to see his career ruined by redistricting. The same fate befell Steve Solarz, a nine-term incumbent who became the party's premier foreign policy voice in the 1980s, when his district was carved up by lawmakers in 1992. Solarz chose to fight on in an almost completely new district with a heavy Hispanic population. But despite pouring millions of dollars into his effort, he lost the primary by six points to Nydia Velazquez, finishing with just 28 percent. If Weiner's district is sacrificed next year, he'll still have the option of running again, but it would be on very unfriendly turf -- with a high probability of defeat.

4. He stays in Congress, keeps his district, and still loses. It isn't automatic that Weiner's district will disappear next year. Governor Andrew Cuomo is now pushing a plan that would overhaul the redistricting process, taking the power away from legislators and handing it to an independent commission. If this happens, then Weiner will have an excellent chance of keeping his district.

But, as noted above, this is still only half the battle. The 9th District is the second most conservative New York City-based district, behind only the Staten Island-based 13th (which is now represented by Tea Party Republican Michael Grimm). Against weak opposition last year, Weiner was still held to just 60 percent of the vote. (Yes, the powerful anti-Democratic national tide was a factor, although its also worth noting that the statewide GOP ticket in New York performed feebly last November.) Republicans may have a strong candidate in Eric Ulrich, an ambitious young city councilman from Queens. In a race against Weiner, Ulrich would have no trouble raising money from conservatives nationally, and New York's tabloid press -- the Post, in particular -- would surely be his friend during the campaign. Weiner also wouldn't be able to count on Obama for much top-of-the-ticket help; even as he crushed McCain across New York in 2008, the president barely prevailed in the 9th District.

In other words, Weiner would be very vulnerable to a Republican challenger if he's the Democratic nominee in 2012. He could also potentially face a problematic Democratic primary, one that could drain some of his resources and force the scandal back into the news.

And what would Anthony Weiner do as a former congressman? Politico's Maggie Haberman, who has been covering him since his days on the New York City Council, suggests that Bill Clinton -- who officiated Weiner's wedding last year and whose wife is Abedin's boss at the State Department -- would help him secure lucrative private sector work. Making money would undoubtedly be a concern for Weiner, who did not come to Congress with much of it.

My own guess is that he'd wind up where he's always seemed most comfortable: on cable news. It would be more than a gimmick hire for MSNBC (or whoever) -- as a performer, Weiner is a genuine talent.